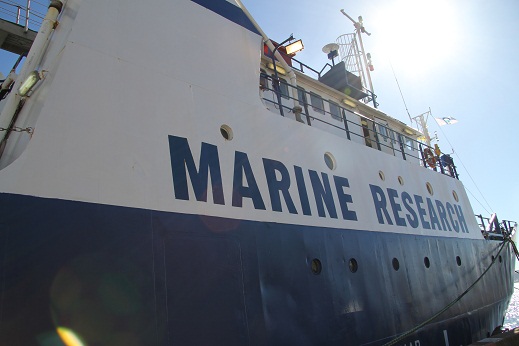 Australia’s Marine National Facility research vessel, Southern Surveyor, is on its way into the Indian Ocean with Chief Scientist, Dr Eric Schulz, from the Australian Bureau of Meteorology and the Principle Investigator, Professor Nathan Bindoff, from the Institute for Marine and Antarctic Studies.

The team is off to the middle of the Indian Ocean to investigate, for the first time, the influence of ocean currents heading east from Africa and how they might affect Australia’s major west coast current, the Leeuwin Current. This predominantly southward travelling current is active and strong, and it creates eddies into the Indian Ocean. It’s also known to affect Australia’s climate and weather patterns.

Understanding the Indian Ocean and how it circulates is pivotal to helping us to work out the influence this ocean has on climate, sea level rise and the storage of carbon dioxide, among other things.

The last time Southern Surveyor was in the Indian Ocean we deployed a large mooring at 25S, 100E, and on this voyage we’re heading back to pick it up, download the data and then return it to the ocean to continue collecting data.

Along the way we’ll be deploying 20 surface drifters provided by the National Oceanic and Atmospheric Administration (NOAA), in the USA, as part of the global surface drifter program.

And, the team will also deploy 7 Argo floats. There are around 3000 of these underwater robots currently collecting and relaying temperature and salinity observations in the world’s oceans right now.

On board, as one of our support staff members, is Hiski Kippo from CSIRO. He’ll be sending through blog updates, as part of his volunteer work with Scientists and Mathematicians in Schools. Hiski volunteers with grade 6 teacher, Emma Ramsden, and her S6 class at West Leeming Primary School in Perth.

I’m sure we’ll get some great photos and updates from Hiski that we will share with you as we head into the Indian Ocean!

Previous post:
Cataclysms in the distant Universe
Coming up next:
Red and Blue, Spinning Around You