Growth in fossil fuel emissions slowed in 2015, so have we finally reached the peak?

Growth in fossil fuel emissions slowed in 2015, so have we finally reached the peak?

Worldwide carbon emissions from fossil fuels grew very little in 2014 and emissions are projected to decline slightly in 2015 - an unexpected change form the fast emissions growth of 2-3% per year since the early 2000s. Are we now on the pathway to keep the climate at or below 2℃ global warming? 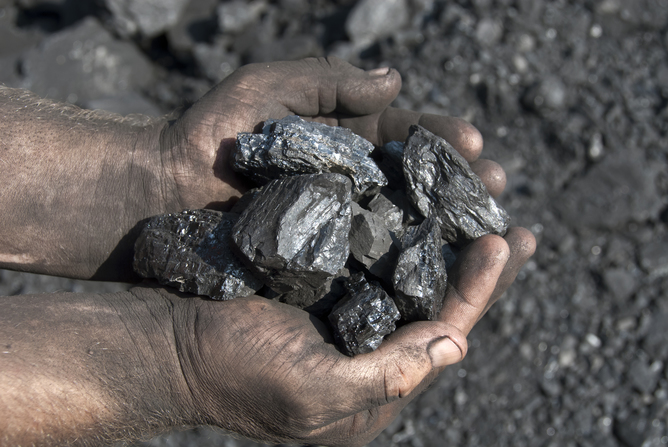 Coal consumption is down in China, slowing growth in global carbon emissions from fossil fuels. Coal image from www.shutterstock.com

Despite robust global economic growth over the past two years, worldwide carbon emissions from fossil fuels grew very little in 2014, and might even fall this year.

A report released today by the Global Carbon Project has found that fossil fuel emissions of carbon dioxide grew by only 0.6% in 2014, breaking with the fast emissions growth of 2-3% per year since early 2000s. Even more unexpectedly, emissions are projected to decline slightly in 2015 with continuation of global economic growth above 3% in Gross Domestic Product.

This is the first two-year period in a multi-decade record where the global economy shows clear signs of decoupling from fossil fuel emissions. In the past, every single break or decline in the growth of carbon emissions was directly correlated with a downturn in the global or regional economy.

This time is different.

However, it is quite unlikely that 2015 is the much-sought-after global peak in emissions which will lead us down the decarbonisation path required to stabilise the climate.

In a separate paper published today in Nature Climate Change, we look in more detail at the possibility of reaching global peak emissions.

The principal cause of this unexpected lack of growth in emissions is the slowdown in the production and consumption of coal-based energy in China in 2014, followed by a decline in 2015.

This has taken China’s emissions growth from close to double digits during the past decade to an extraordinary low of 1.2% growth in 2014 and an unexpected decline by about 4% projected for 2015. 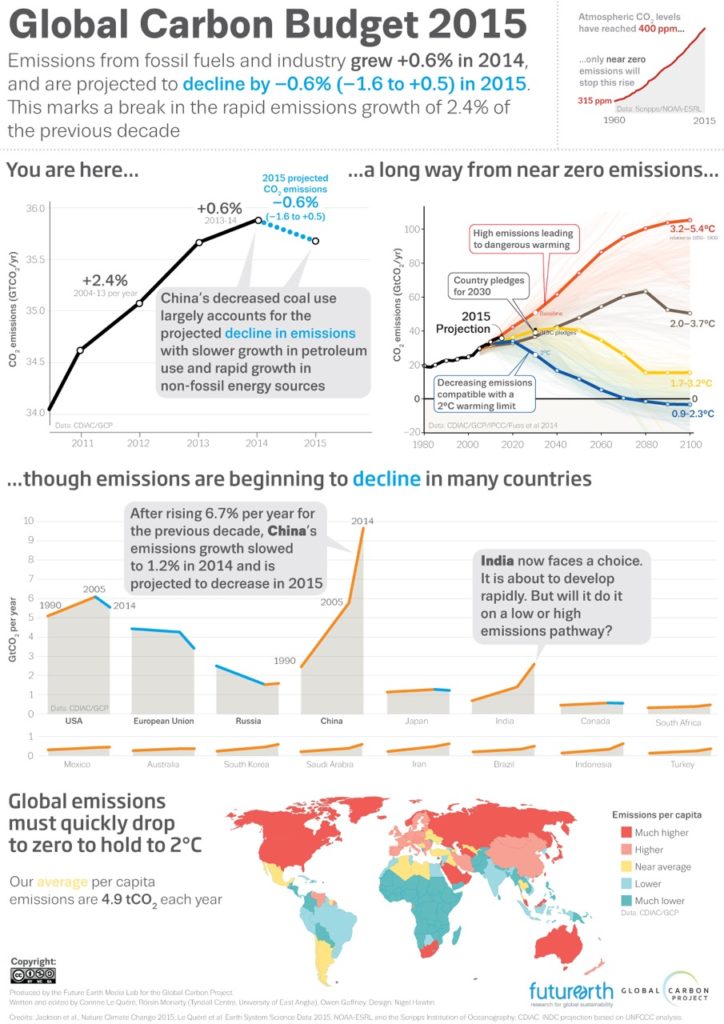 Although China is only responsible for 27% of global emissions, it has dominated the growth in global emissions since early 2000s. Therefore, a slowdown in China’s emissions has an immediate global impact.

Further adding to this main cause, emissions from industrialised economies, including Australia, Europe and the United States, have declined by 1.3% per year on average over the past decade, partially supported by extraordinary growth of renewable energy sources.

Have we reached global peak emissions?

Most likely not. One key uncertainty in answering this question is the future of coal in China. But China is pushing to achieve peak carbon consumption as early as possible (and emissions by 2030), and to phase out the dirtiest types of coal from the nation’s energy mix, largely in response to a pollution crisis affecting many of its large urban areas. It is well within the possibilities that growth in coal emissions in China will not resume any time soon, and certainly not at the fast pace of the previous decade.

A strong basis for this assessment is the remarkable growth in non-fossil fuel energy sources such as hydro, nuclear and renewables. These accounted for more than half of the growth in new energy in 2014, with a very similar mix during the first three-quarters of this year. Such structural changes, if continued, could bring China’s peak emissions much earlier than anyone is anticipating and certainly well before 2030.

Although it is unlikely that we have reached global peak emissions, it is very likely that 2015 marks a new era of slower growth in fossil fuel emissions. This is perhaps the first sign of a looming peak on a not-too-distant horizon.

Recent modelling analyses of post-2020 pledges by over 180 countries to reduce emissions to 2030 (the so-called Intended Nationally Determined Contributions) show that peak emissions is not to come any time soon. Under the pledges made, global emissions continue to rise to 2030.

This might well be the future. But models used for such analysis were not that different from those that completely missed the very rapid rise of the Chinese economy in the decade of 2000 and perhaps now its rapid decarbonisation.

However, China is not alone in this game. Industrialised countries plus China, accounting for half of global fossil fuel emissions, have pledged to reduce or stabilise emissions absolutely by 2030.

But the other half belongs to less-developed nations whose pledges do not include absolute emission reductions but departures from business-as-usual scenarios (meaning emissions can increase, but not as fast). This emphasises the disproportionate importance of international climate finances required to help that “other” half of the emissions to peak and join the decline of the rest.

2015 has been an extraordinary year, and not just because of China. Emissions from Australia, Europe, Japan and Russia have all come down as part of longer or more recent trends. Installed wind capacity reached 51 gigawatts in 2014, an amount greater than the total global wind capacity just a decade ago. Solar capacity is 50 times bigger than it was ten years ago.

And emissions from land-use change, albeit with large uncertainties and high emissions from Indonesian fires this year, have been on a declining trend for over a decade. These trends are not stopping here. 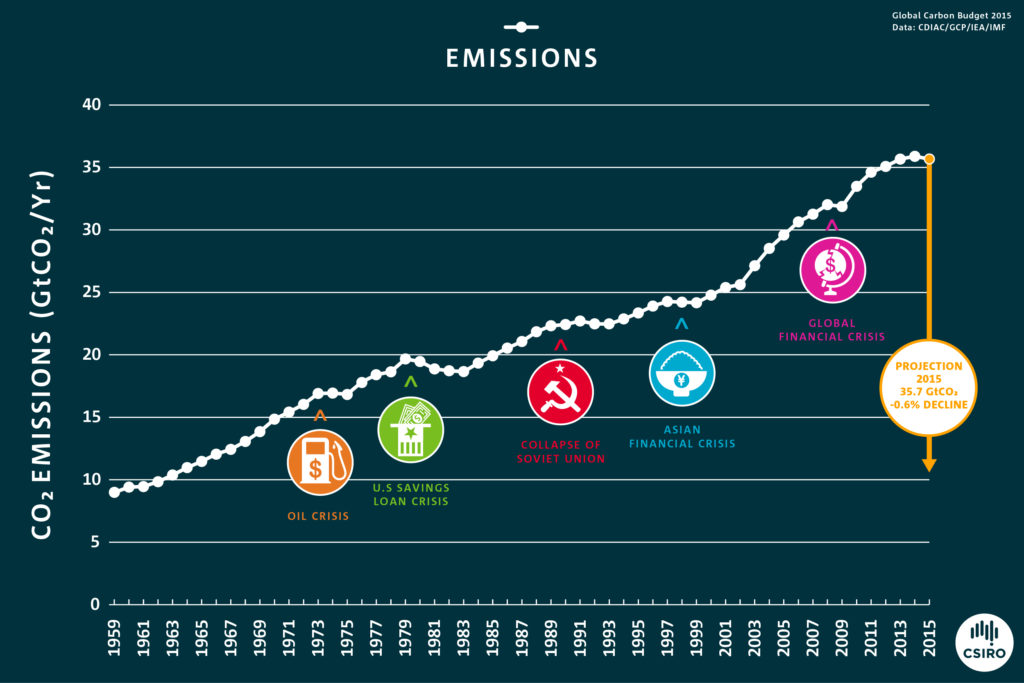 Yet the current emissions path is not consistent with stabilising the climate at a level below 2℃ global warming.

If we maintain the level of 2015 emissions, the remaining carbon budget before setting the earth on a path that exceeds 2℃ is less than 30 years away, unless we bet on unproven negative emissions technologies to remove carbon from the atmosphere later in the century.

But 2015 is a historic year to galvanise further action. The trends in emissions are favourable, and countries have the opportunity to negotiate significantly higher levels of ambition to decouple economic growth from emissions.