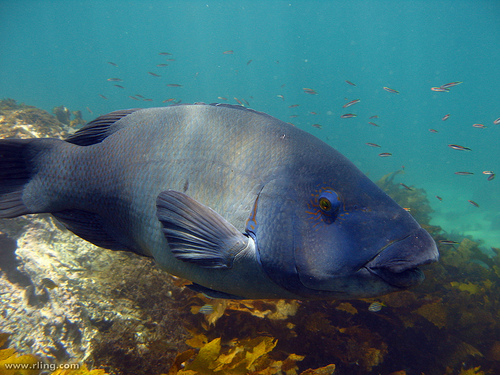 This picture does not do this fish justice- in real life, male Eastern Blue Gropers are the same vibrant blue as our logo. They are almost a metre long so if one swims past you, you know about it.

A big, blue fish with bulging, bright yellow eyes, peg-like teeth and plump lips sounds like something out of Dr Seuss’s ‘One Fish, Two Fish, Red, Blue Fish’. These fish, however, are real and they’re marine celebrities.

First, some of them are local identities with names like ‘Bluey from Clovelly’ or ‘Monty from Julian Rocks’.

They’re friendly and curious and are known to swim up to snorkelers and divers.

Second, they have prestige. Their species is the fish ’emblem’ of the state of New South Wales . They have even been known to swim with former state premiers.

It has been illegal to spearfish Eastern Blue Gropers in NSW since 1969 but, if a male blue groper dies, a female groper changes sex to become a male. Females aren’t actually blue but an olive-green colour, and smaller.

Their cousins across the Nullabor swim off the WA coast and can grow to an even bigger 1.6m.

Western Blue Gropers (Achoerodus gouldii) are famous too. Australian author and marine advocate Tim Winton wrote the novel ‘Blueback‘ about a blue groper that befriends a boy and teaches him about the importance of looking after our environment. Dr Seuss would agree with that.

Previous post:
Vaccine arrives to boost the frontline fight against Hendra virus
Coming up next:
The superstructure underway with block 303