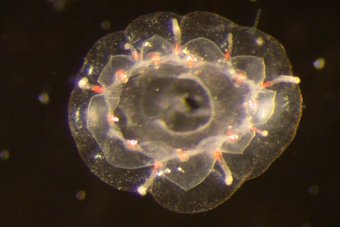 Csiromedusa medeopolis – meaning “jellyfish from CSIRO” and “city of gonads”.

Where to start with the jokes and puns? Too dangerous, so lets keep it serious.

This recently discovered jellyfish is only a few millimeters wide and was found in the River Derwent near CSIRO’s Hobart offices – hence the first part of the name.

The second part is far more interesting. The jellyfish looks like a flying saucer with a cluster of gonads, or sex organs, on top. The gonads have been described as arranged like “skyscrapers in a downtown business district”.

“It’s absolutely different from every other jellyfish that’s ever been known,” Dr Gershwin said.

“So we not only put it into its own new species and its own new genus, but it’s actually a brand new family.”

“Quite possibly and quite humbly the greatest discovery of my career, ever. I mean I’ll be lucky if I ever get a discovery even half as incredible again,” she said.