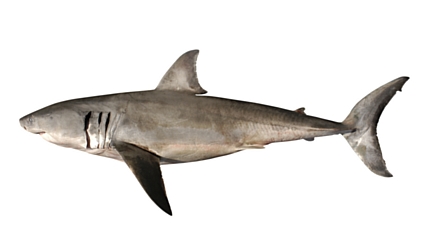 White Shark: news@CSIRO is heading to western Queensland this week to give a bit of a hand to the Oceans in the Outback crew who are taking marine science to the towns of Dalby, Roma, Charleville and Longreach as part of Science Week.

I for one can’t understand the calls for culling of sharks after someone gets “attacked”. If I was a shark and a tasty meal which can’t swim very fast, had little means of protection, and came “home delivered” – I would have a crack too.

Anyway, the White Shark can grow up to 6m in length and weigh in at 2.2 tonnes. However, the average length is between 4m and 5m long. It reaches maturity at about 15 years of age and can live to over 30 years.

This is from Wikipedia in regard to the naming of the Great White:

Carolus Linnaeus (a very interesting Swedish botanist) gave the great white shark its first scientific name, Squalus carcharias, in 1758. Sir Andrew Smith gave it the generic name Carcharodon in 1833, and in 1873, the generic name was identified with Linnaeus’ specific name and the current scientific name Carcharodon carcharias was finalised. Carcharodon comes from the Greek words karcharos, which means sharp or jagged, and odous, which means tooth.