Flashback as old tech drifts back with the tides

Flashback as old tech drifts back with the tides

A casual stroll along the beach has helped to uncover a relic of our data collection past. 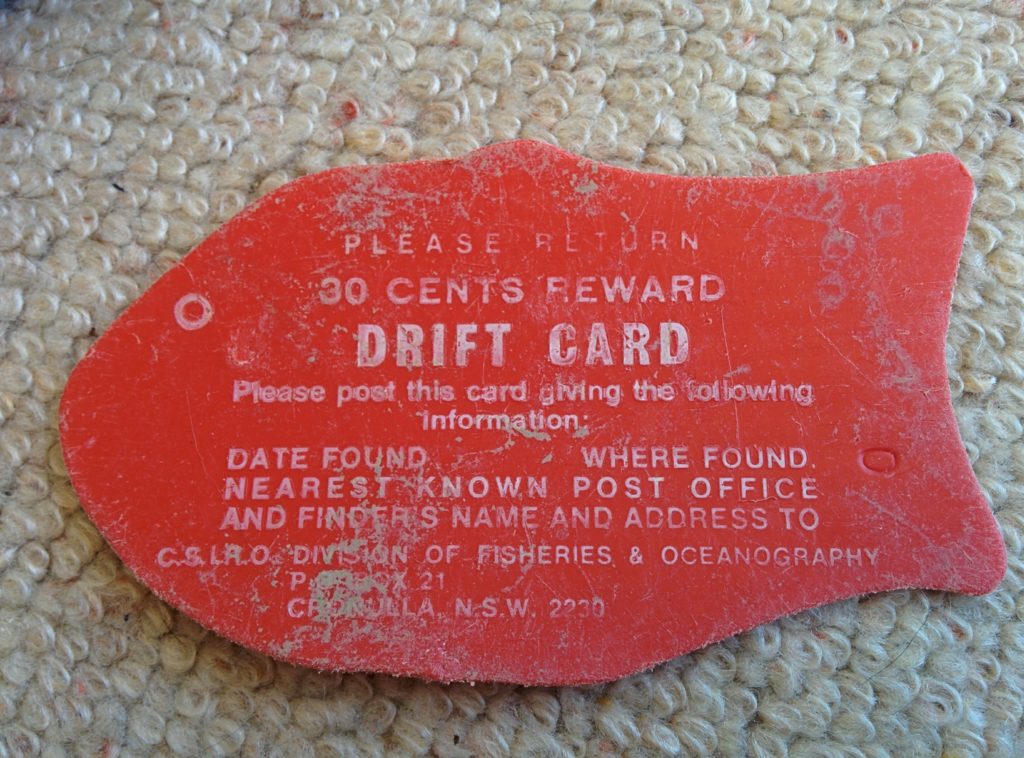 Our drift cards were used to calculate and model ocean currents around Australia and other parts of the world. Image – Fiona Hayter & Jason Milward.

The emergence of the information age with its high tech sensors, high powered computers and digital storage has given us almost instantaneous access to unimaginable amounts of data. It wasn’t always this simple though, with even the most ingenious methods sometimes requiring weeks or months before results could come full circle.

One such data-collecting relic was recently discovered by Fiona Hayter and Jason Milward among the rocks near the Ethel Shipwreck about three hours west of Adelaide while the pair were on holiday. It doesn’t have a single sensor or even require batteries, and it can even fit into the palm of your hand — it’s known as a drift card.

Fiona says the couple was fortunate enough to notice the drift card among the rocks with its peculiar design and bright colours catching their attention.

“We found it just after a big storm went through the area, most of the coastline was eroded, which is probably how we found it.”

With a return address to our Division of Fisheries and Oceanography in Cronulla (which hasn’t been around since 1981), the small piece of equipment was used for decades to calculate and model ocean currents around Australia and other parts of the world.

Using a drift card was simple: you’d pick a location ensuring you’ve recorded the exact coordinates and then you’d just drop it into the ocean. The method relies on people finding the cards and returning them providing information on where it was found which is then used to piece together data to model the currents.

The cards were used during the 1960 and ’70s with thousands being released in the oceans surrounding Australia and some parts of South Africa. According to our research technician Matt Lansdell, we still get around two or three drift cards returned every year.

“Unfortunately this one won’t provide any useful information concerning drift patterns, due to the length of time between release and when it was returned,” Matt said.

“We don’t know what happened during this time: the card could have been submerged beneath a sandbar or even snagged along a reef, because of this it’s only those recovered shortly afterwards that have relevant data.”

Nowadays information is gathered at an unprecedented rate with the Argo system collecting information on the direction, speed, temperature and salinity of the ocean currents before transmitting the information to research institutions across the world.

We now use a much bigger ‘drift card’ to study the ocean. The Argo ocean profiling float is one of a fleet of around 2,700 in the world’s oceans used by scientists to observe sub-surface ocean conditions and provide year-round, near real-time information on ocean conditions to agencies.

Matt however still encourages citizen scientists and eager beach combers to return any of our drift cards, since returned archival tags have, in the past, contained valuable information.

Although you won’t be seeing drift cards make a return any time soon it’s still an oddity to see past technology survive into the present day, and just to prove that they’re in it for the love of scientific discovery and not money, Fiona and Jason have declined the 30 cent reward offer upon returning the card.

Find out more about our advanced marine technologies

Previous post:
Finding gold in a rush
Coming up next:
Going cold turkey: how to store your Christmas bird