Dwarf galaxies are the most abundant galaxies in the universe. Yet understanding how these systems behave in galaxy group environments is still a mystery.

A composite image of Centaurus A which has a dwarf galaxy ESO 324-G024 nearby. X-ray: NASA/CXC/SAO; Optical: Rolf Olsen; Infrared: NASA/JPL-Caltech

Dwarf galaxies are the most abundant galaxies in the universe. Yet understanding how these systems behave in galaxy group environments is still a mystery.

These objects are notoriously difficult to study because they are very small relative to classic spiral galaxies. They also have low mass and a low surface brightness, which means that, to date, we have only studied the dwarf galaxies in the nearby universe, out to about 35 million light years away. 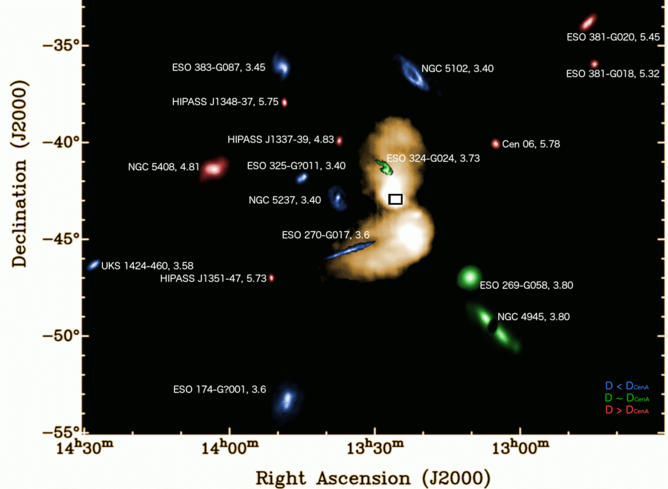 The giant radio lobes of Cen A. For scale, the entire image at the top of the article fits within the small black box shown here in the centre the two lobes. Megan Johnson, Author provided

My collaborators and I have been studying a dwarf galaxy named ESO 324-G024 and its connection to the northern radio lobe of a galaxy known as Centaurus A (Cen A).

The giant radio lobes are comprised of high energy charged particles, mostly made up of protons and electrons, that are moving at extremely high speeds. The lobes were created from the relativistic jet (shown in the image at the top) that is blasting out of the central core of Cen A.

These energetic particles glow at radio frequencies and can be seen as the fuzzy yellow lobes in the centre of the image (above), together with the neutral hydrogen intensity (HI) maps of its companion galaxies. The lobes now occupy a volume more than 1,000 times that of the host galaxy shown in the image at the top, assuming the lobes are as deep as they are wide.

These HI intensity maps are part of a large HI survey of nearby galaxies called the Local Volume HI Survey (LVHIS). These maps have been magnified in size by a factor of 10 so that they can be seen on such a large scale and are coloured by their relative distances to the centre of Cen A.

A green galaxy is at virtually the same distance from Earth as Cen A, while blue galaxies are in front of Cen A (closer to us) and red galaxies are behind it (farther away).

One of the striking things about this image is that out of the 17 galaxies overlaid onto the Cen A field, 14 are dwarf galaxies.

The one object that really interested me after making this image was the dwarf irregular galaxy ESO 324-G024 (just above the black box). It has a long HI gaseous tail that extends roughly 6,500 light years to the northeast of its main body and it is at nearly the same distance as Cen A.

These two pieces of information right away made this a system worthy of investigation because we thought that perhaps there is a connection between this dwarf galaxy and the northern radio lobe of Cen A.

Nothing like this has ever been seen before, probably because galaxies that have giant radio lobes like Cen A are usually hundreds of millions to billions of light years away. Cen A is a special galaxy because it’s only about 12 million light years from Earth.

From observations using the Parkes Radio Telescope and the Australian Telescope Compact Array we were able to conclude that ESO 324-G024 must actually be behind the northern radio lobe of Cen A.

This was an interesting result and it told us that the northern radio lobe must be inclined toward our line of sight, because ESO 324-G024 was at nearly the same distance as Cen A. This had previously been suggested by studying the jet way down in the core of the host galaxy, but it had never been confirmed in this way before.

A wind in the tail

Next we investigated the mechanism responsible for creating the HI tail in ESO 324-G024. We looked at the likelihood of gravitational forces from the large, central host galaxy of Cen A as a potential culprit for ripping out ESO 324-G024’s gas. But we determined that it is simply too far away from the central gravitational potential for gravity to have created the tail.

So we explored ram pressure stripping, which is thought to be a dominant force for removing gas in galaxies within these kinds of groups. Ram pressure is a force created when a galaxy moves through a dense medium, and thus experiences a wind in its “face”. 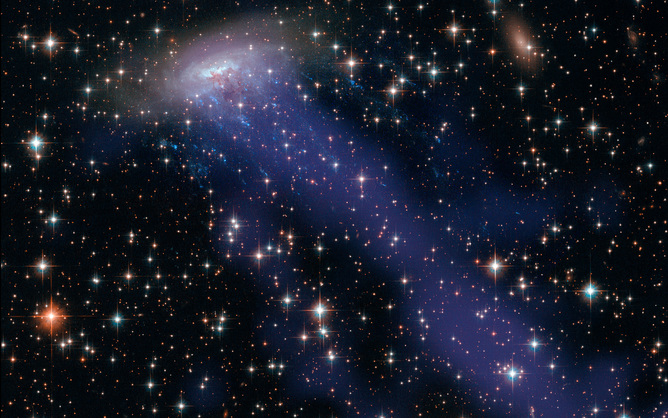 Here you can see the blue streak of gas and dust from spiral galaxy ESO 137-001 being stripped away by ram pressure as it hurtles through space. NASA, ESA, CXC

ESO 324-G024 seemed to be moving too slow for all of its gas to have been blown into its long tail. So we went back to our first conclusion about ESO 324-G024 being behind the radio lobe and surmised what may be happening.

We know that the charged particles inside the northern radio lobe of Cen A are moving extremely fast. If ESO 324-G024 is just now coming into contact with the posterior outer edge of the radio lobe of Cen A, which is likely due to its proximity to Cen A, then it is possible that ESO 324-G024 is not only feeling the wind generated from its own motion through space, but also the wind from the charged particles in the radio lobe itself.

This would be like you running with the dandelion and at the same time blowing on it. Therefore, we concluded that ESO 324-G024 is most likely experiencing ram pressure stripping of its gas as it passes close to the posterior edge of the northern radio lobe.

This means that these types of radio lobes must have wreaked havoc on their dwarf galaxy companions in the distant past. This is an interesting case study that showcases how dwarf galaxies may have been knocked about, blasted, by their larger companion galaxies.

Just how common are situations like this and how have they influenced dwarf galaxies over cosmic time? The answer is that we simply don’t know, but I look forward to exploring these questions.

Previous post:
Diving for treasure to help protect the world’s great reefs
Coming up next:
Don’t miss the boat! Full applications for sea time on RV Investigator in 2017-18 due Friday 4 September!