Data, data everywhere so let’s have a think

Data, data everywhere so let’s have a think

The hackers have had their way with our data - in the best possible way. Here's what the teams at GovHack 2015 did with our data. 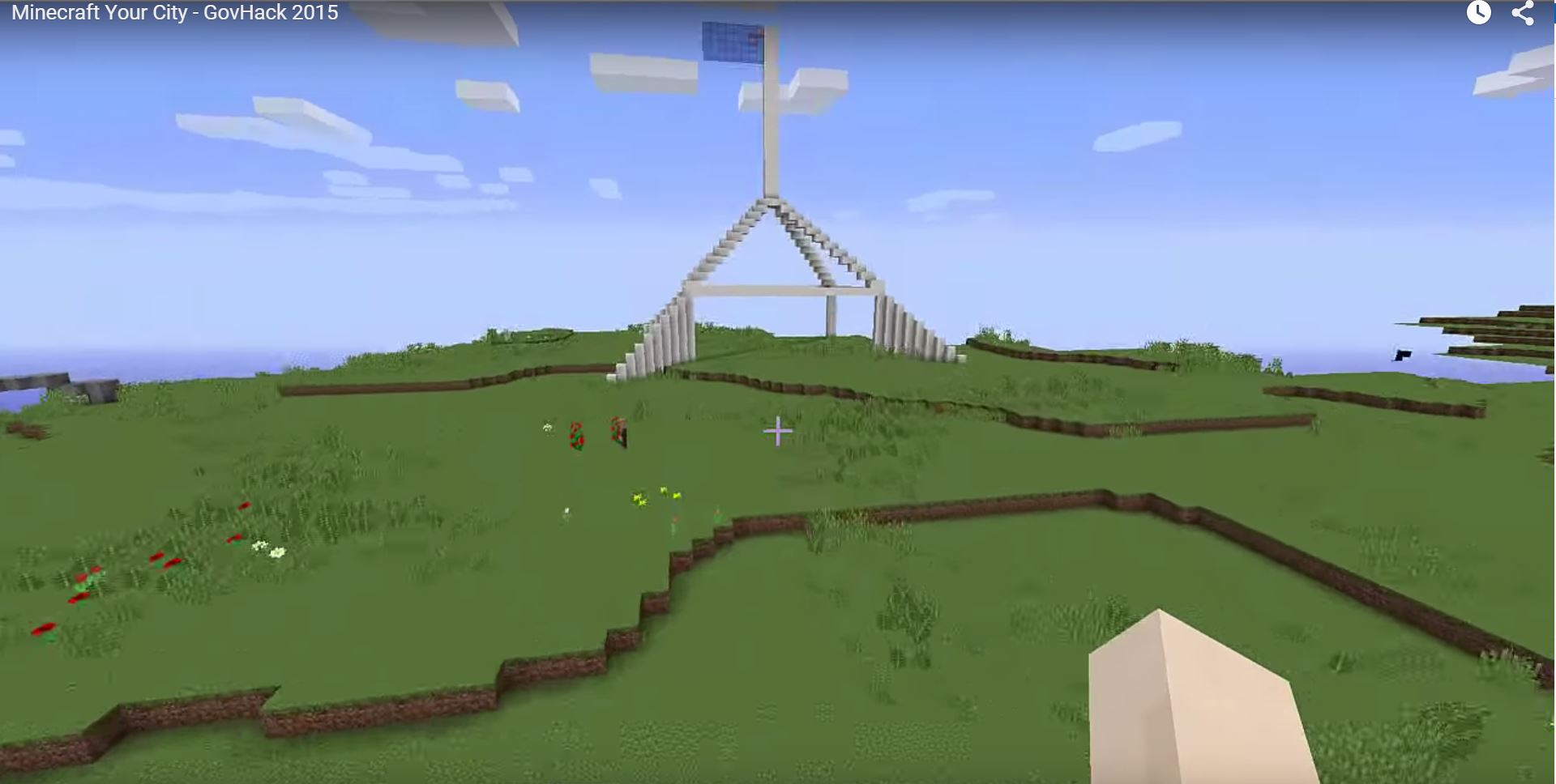 A team of GovHackers turned our topographic data into an accurate, playable Minecraft map of Canberra. Image: YouTube – Matthew Purcell

Data is everywhere. It’s being collected every second of every day, across billions of devices all around the world. And you will often hear that collecting all that data will make us more efficient, that data will change our lives, that it will tuck us in at night and do all our chores.

Well, we wish collecting data meant no more dishes, but at the moment we’re dealing with a far larger problem: we have too much useful data and not all of it is going to good use.

That’s why the annual GovHack competition is such a terrific concept. Organisations (like us) from across Australia and New Zealand provide large swathes of information for the assembled hackers, who dutifully put on their thinking caps and create something fun, interesting, and worthwhile.

Back in early July, teams battled it out over three days to create and develop more than 400 projects for GovHack 2015 across 40+ categories. We ran two categories ourselves – Best Science Hack (co-sponsored with Geoscience Australia) and the CSIRO Bounty Prize, which attracted 70 impressive entries.

#GovHack red carpet awards are kicking off. Congratulations to all involved. You all rock! pic.twitter.com/l9RW3ZZu1Q

After weeks of careful deliberation the GovHack winners were announced at a ceremony in Sydney on Saturday night. Amongst the impressive hacks were an array of mind-boggling entries which wowed the crowds: a video game that lets you explore a topographically accurate Canberra, an app that helps you discover the mood of trees, and a mobile app to help people identify Australian wildlife.

There were too many to mention, but here’s three of our favourites.

Minecraft is the darling of the educational video game movement. The game combines resourcing, geometry, resource and project management into an incredibly enjoyable educational game, an educational game that kids actually want to play.

Canberra-based developers, Mind the App, thought they could use this mega successful game to create a fully explorable and accurate topological map of Canberra within Minecraft. The result – pulled together using our data alongside some of Geoscience Australia’s – is very impressive.

Keep an eye out for the incredibly realistic representation of pollies strolling through the halls of power.

By importing this information into the Minecraft video game, the “hackers” have made geospatial data more approachable and more enjoyable to explore. If you have Minecraft and you want to have a go, you can download the map and soar across the nation’s capital in all of its blocky glory.

Have you ever stopped to think about the amazing amount of biodiversity around you? Wouldn’t it be great if we could just ask someone: “What plants and animals are in my area right now”?

Well the winner of the CSIRO Bounty award, FieldGuideAU, may have the perfect solution. They set up a system which lets you query a range of sources to find the answer, using one simple tweet.

Send a tweet with your location to @FieldGuideAU and a list of common plants and animals nearby will be tweeted back to you faster than you can say ‘Common Eastern Froglet’. 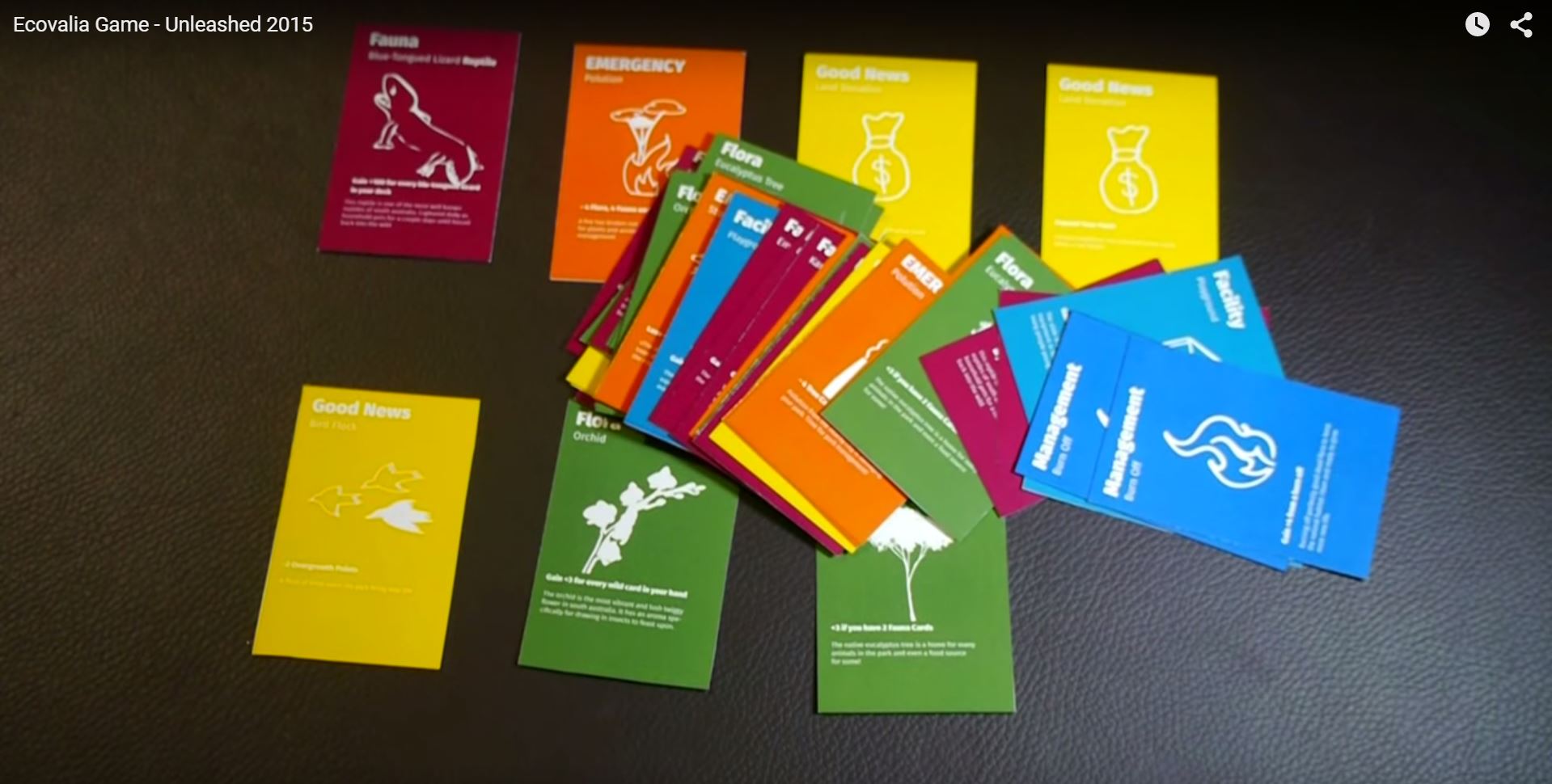 It’s in the cards: The Torange Juice team have made looking after National Park’s fun again – with Ecovalia. Image: YouTube – InspirationalSpring

So far we have focused on projects that reimagine data as a useful app or a video game. But the Torange Juice team take a different approach with their hack ‘Ecovalia’.

They’ve turned information from the South Australian Department of Environment, Water and Natural Resources, and our ever popular Atlas of Living Australia, and created a physical print-and-play, table-top card game.

This isn’t Snap, Solitaire or Magic: The Gathering. The game casts the player in the role of park custodian, encouraging participants to manage the development and conservation of South Australia’s reserves and national parks.

We encourage you to take a look at the other winning projects over on the GovHack website, but now we would like to congratulate the winners of our categories: