We’ve designed and built a specialised ‘camera’ for the world’s largest single dish telescope. Soon it will be searching the skies for pulsars. 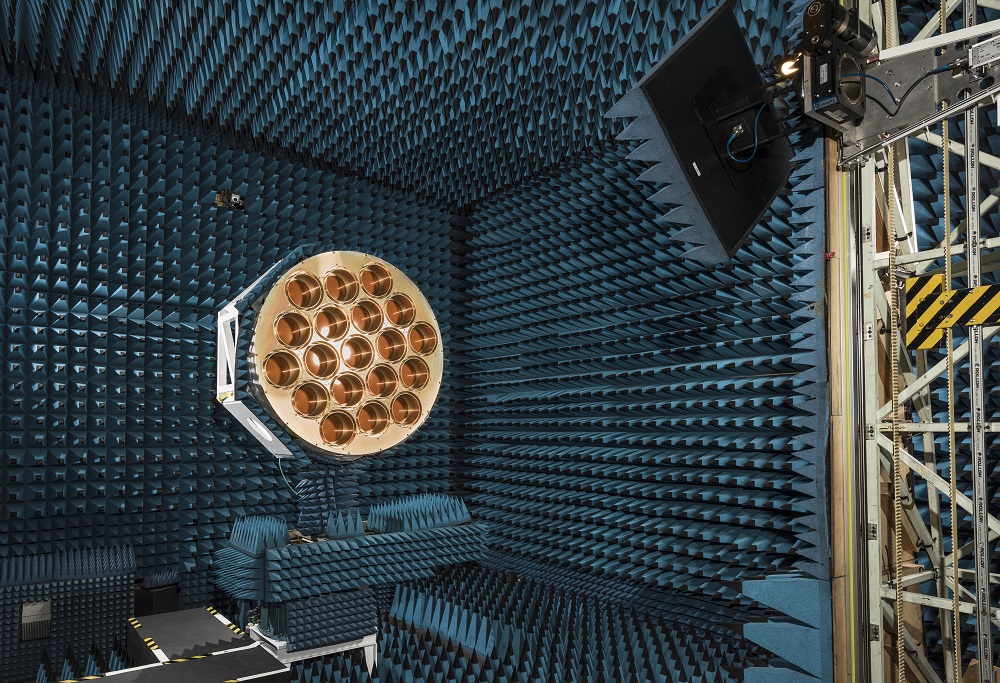 Large gold disc with 19 holes on its face set up on a stand in the middle of a room covered with blue foam cones.

The 19-beam receiver for FAST being tested at our lab in Sydney before being shipped to its new home in China.

While the rest of us were enjoying the start to summer last week, a team of our astronomers and engineers were visiting the world’s largest single dish radio telescope – FAST – in southern China.

Even on a clear day it’s difficult to take in the enormity of FAST, the antenna ‘dish’ is 500-metres wide, but last week it was shrouded in wintry fog.

Fortunately the team wasn’t there to take in the view. They were there to check on a precious delivery, a specialised ‘camera’ for the telescope that had been designed and built by our team in Sydney.

Most astronomy is about observing waves of light. Stars, galaxies and gas clouds in space emit light we can see (visible light) as well as light from other parts of the electromagnetic spectrum in the form of radio waves, gamma rays, X-rays, and infrared radiation. 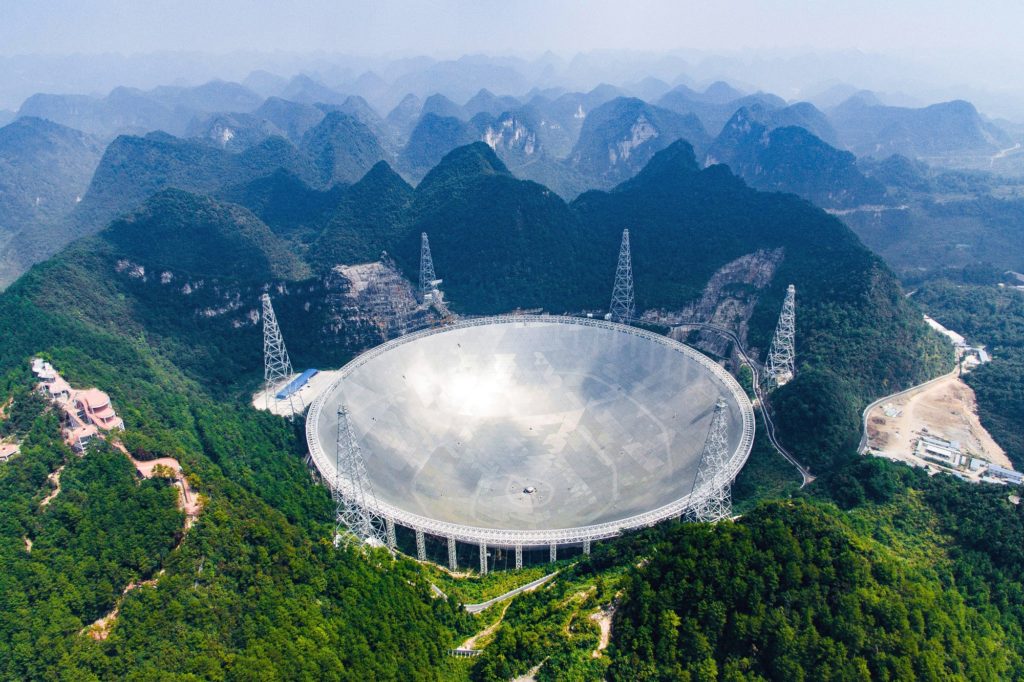 Optical telescopes such as the Hubble Space Telescope capture visible light from space. Radio telescopes, on the other hand, detect and amplify radio waves from space, turning them into signals that radio astronomers use to enhance our understanding of the Universe.

We’ve been developing specialised instrumentation for radio telescopes since the 1940s, when the field of radio astronomy first emerged, for our own and international telescopes. Which brings us back to the new FAST telescope.

The National Astronomical Observatories of the Chinese Academy of Sciences (NAOC) were aware of other receivers we had built and contacted us to ask if we could design and build one of the most sensitive receivers in the world for their FAST project. 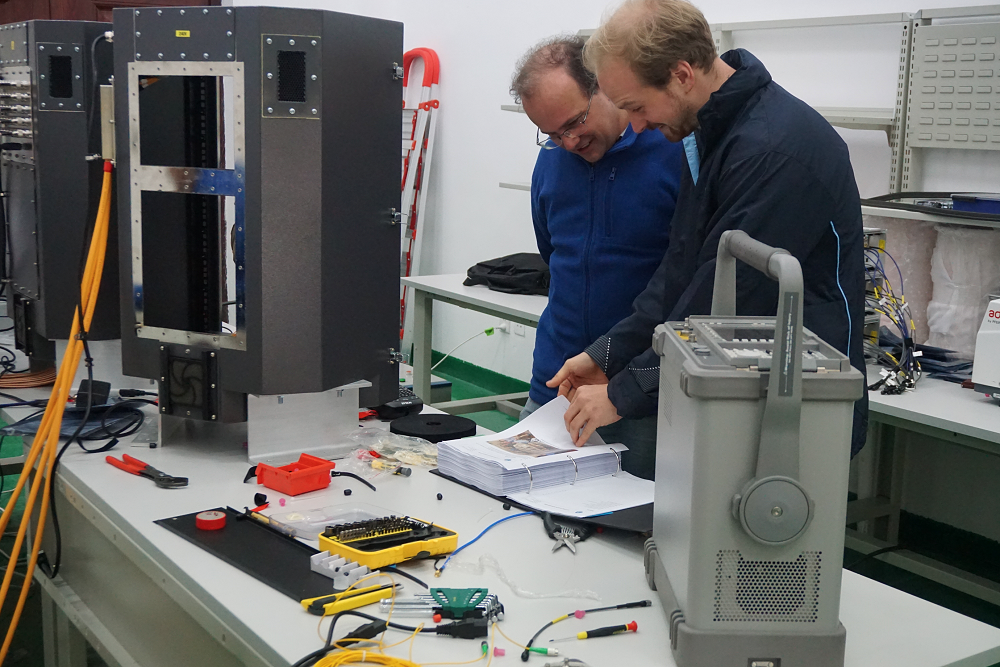 Two men standing looking at a book in a room filled with computer equipment.

Our astronomer George Hobbs with Peter Roush in the lab at FAST. Peter is one of our talented engineers who worked on the control and monitoring of digital elements for the FAST 19-beam receiver, which allows the receiver to be operated remotely.

“Our engineering team designed and built a powerful 19-beam receiver for FAST. What makes this receiver special is that most telescopes can only see one piece of the sky at a time: the 19-beam receiver will ‘see’ more, speeding up how quickly FAST can survey the sky,” says George.

The capabilities of our own Parkes radio telescope, for instance, have been dramatically enhanced by the development of a 13-beam receiver, which lets astronomers scan the sky in less than a tenth of the usual time.

The 19-beam receiver for FAST was completed and tested in our Sydney laboratory earlier this year, and delivered to the telescope site this month. Our team has been on the ground checking that the receiver’s journey to its new home hasn’t upset any of its sensitive equipment. We expect that it will be installed on the telescope in early 2018. 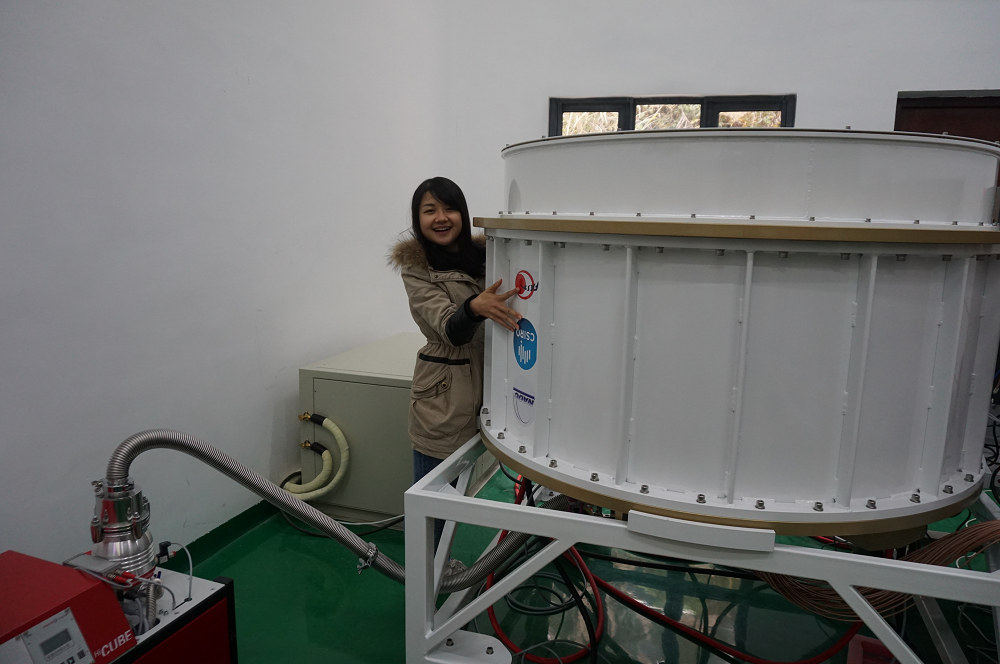 Ms Lei Zhang, a jointly supervised NAOC-CSIRO graduate student, with the CSIRO designed and built 19-beam receiver at the FAST site in China.

Lei Zhang, a jointly supervised NAOC-CSIRO graduate student, with the our designed and built 19-beam receiver at the FAST site in China.

FAST was officially opened in 2016 and has been using another receiver to do early science observations. In October this year the first results with FAST – the discovery of two new pulsars, rapidly spinning neutron stars – were announced. These pulsars were confirmed and, along with more new discoveries, are now being studied in detail by our Parkes radio telescope.

“FAST provides astronomers with the technology to search for a range of signals including detecting new pulsars –– in our galaxy and possibly the first radio pulsars in other distant galaxies,” says George.

“Once the new 19-beam receiver is installed on FAST we expect that the collaboration between Australian and Chinese astronomers on pulsar research will grow.”

How do we ‘see’ radio waves?

Find out more about our work developing receivers for radio telescopes.

Previous post:
Blood alcohol level explained (and other tips for keeping it classy this silly season)
Coming up next:
The holes in Santa’s stocking: Mapping food loss from the farm and beyond