We’ve been leading the science and innovation charge in Australia for a while now, and while this year marks the 100th year of government science funding in Australia, it’s also the 60th year since Australia’s first computer was shipped to Victoria to begin its second life under a new name. 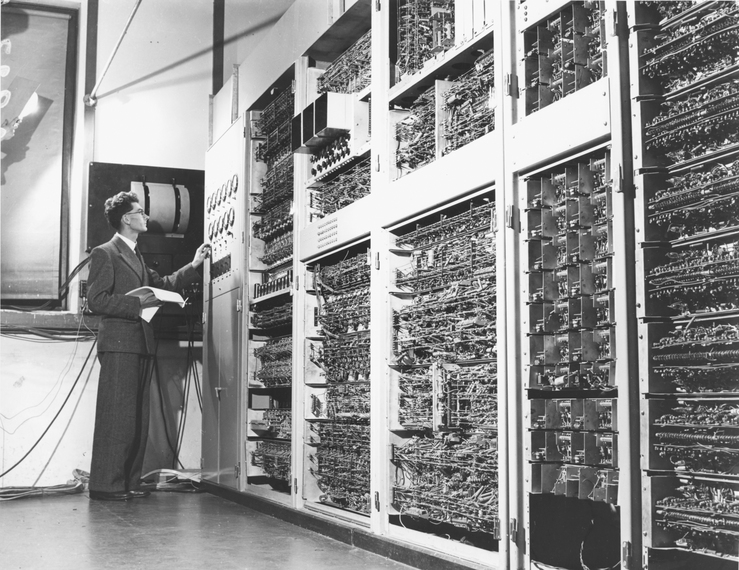 One of CSIRAC’s creators Trevor Pearcey, surveying his machine (1952).

We’ve been leading the science and innovation charge in Australia for a while now, and while this year marks the 100th year of government science funding in Australia, it’s also the 60th year since Australia’s first computer was shipped to Victoria to begin its second life under a new name.

Back in 1949 two of our pioneering scientists, Trevor Pearcey and Maston Beard, created the first programmable digital computer in Australia at our radiophysics labs in Sydney.

Back then we were called the CSIR (Council for Scientific and Industrial Research) so we called it CSIR Mk1. At the time it was only the fifth computer in the world, and although it was a mighty machine for the time (it was 1000 times more powerful than anything else in the country), it pales in comparison to anything available now.

To put CSIR Mk1’s capabilities in perspective, a smartphone released in 2016 has about 7 million times the processing power, while weighing 1/10,000th as much!

When it reached the end of its life at CSIRO, CSRI Mk1 was decommissioned and shipped down the Hume Highway to Melbourne, where it was installed in the University of Melbourne’s newly established Computation Laboratory.

The move brought computing to Victoria for the first time, and this week marks 60 years since CSIR Mk1’s began its second life in a new role, in a new city, with a new name. 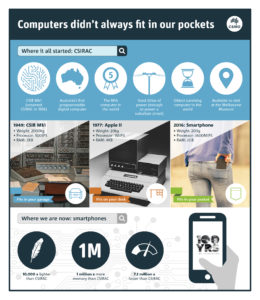 Where are we now, and what might be next?

The world has come a long way since CSIRAC and so has CSIRO, although one thing that hasn’t changed is our involvement in scientific computing.

Our Information Management and Technology (IMT) Scientific Computing team continues to deliver world leading supercomputing solutions enabling our researchers to develop an improved mesh for use in pelvic organ prolapse surgery, and solve a genomic jigsaw to cure disease.

Another thing that hasn’t changed is it’s still just as difficult to predict where we’ll be 60 years from now, although we can be guided by what will likely be the key developments that have the largest effect on shaping the future of computing.

While quantum computing has been ‘the next big thing’ for a while now, the sheer impact it would have means it can’t be discounted, and with the current focus around cognitive computing and machine learning, artificial intelligence is moving forward in leaps and bounds, and will likely weave its way into just about everything in the future, in ways we’re yet to even imagine.

You can read more about our latest supercomputer we built in partnership with Dell, which is named Pearcey after the very same Trevor Pearcey who created CSIR Mk1.