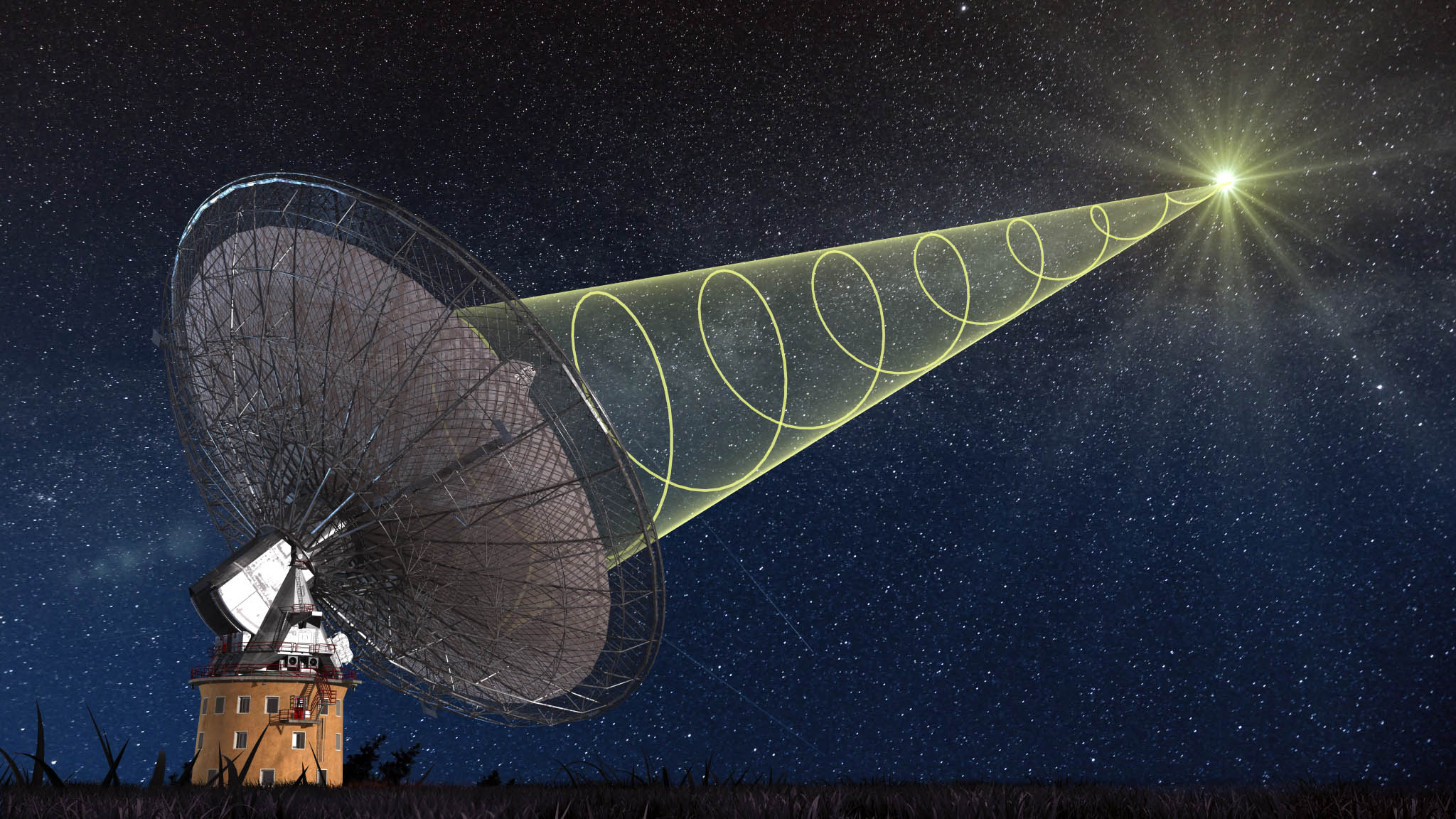 CSIRO’s Parkes radio telescope has detected a new ‘fast radio burst’. This is the first ‘live’ detection of one of these mysterious bursts. Credit: Swinburne Astronomy Productions.

News this week that astronomers using our Parkes radio telescope have detected a short, sharp flash of radio waves from an unknown source up to 5.5 billion light years from Earth is the latest chapter in a cosmic ‘whodunnit’ mystery. We have mounting evidence, a team of detectives, and a good pinch of suspense. All we need now is to find the body.

The evidence
‘Fast radio bursts’ are short and bright: they last only milliseconds but give out an enormous amount of energy.

The first burst was discovered in 2007 by astronomers combing old Parkes data archives for unrelated objects. Five more detections were made from Parkes data before researchers using data collected with the Arecibo telescope in Puerto Rico made the first finding using another facility.

This latest discovery, made by Swinburne University of Technology PhD student Emily Petroff, is the first ‘live’ detection of one of these mysterious bursts. It could have given off as much energy in a few milliseconds as our Sun does in a day.

The team of detectives
Since the first burst was discovered astronomers worldwide have been vying to explain the phenomenon.

Confident that she would spot a burst in real-time, Emily had an international team poised to make rapid follow-up observations, at wavelengths from radio to X-ray.

After the Parkes telescope saw the latest burst go off, the team swung into action on 12 telescopes around the world – in Australia, California, the Canary Islands, Chile, Germany, Hawaii, and India – as well as space-based telescopes.

The suspense
What could be the origin of these mysterious bursts? While evidence is mounting, astronomers are developing and discounting theories.

According to Simon Johnston, CSIRO’s head of astrophysics, based on these latest observations we can rule out some ideas because no counterparts were seen in the optical, infrared, ultraviolet or X-ray. It’s also unlikely that they’re caused by radio interference from man-made sources on Earth, atmospheric phenomena, gamma-ray bursts or evaporating black holes. That they’re caused by a neutron star imploding into a black hole remains a possibility.

A whole new area of astrophysics?
While it’s still early days in the detection and description of fast radio bursts, who knows where it might lead?

Pulsars, the rapidly spinning remnants of supernova explosions that send out regular flashes of radio waves much like a lighthouse’s beacon, were discovered in 1967. In fact, the first pulsar was famously named LGM-1 for ‘little green men’. While the alien theory was quickly quashed, pulsars are now being used by astronomers to look for gravitational waves and to test Einstein’s theory of relativity; they also offer potential as extremely accurate clocks and are possible alternatives to satellite-based global positioning systems. Our Parkes radio telescope has detected over 50% of the more than 2000 known pulsars.

But back to the case at hand. It seems that identifying the origin of these mysterious fast radio bursts is now only a matter of time.

The finding is published today in Monthly Notices of the Royal Astronomical Society. Emily Petroff is co-supervised by CSIRO and Swinburne University of Technology, which is a member institution of the ARC Centre of Excellence for All-sky Astrophysics (CAASTRO).

Previous post:
Smart home tech: keeping you independent in your golden years
Coming up next:
Digital trend: the time is ripe for “creatives”