Astronomers have been using our Parkes radio telescope to study the cosmic train-wreck that is Abell 3667.

Abell 3667 is a cluster, or group, of galaxies, lying 730 million light-years away. It’s a big beast, with at least 550 member galaxies. But it’s actually two smaller clusters in the process of crashing into each other.

Here’s a simulation of colliding clusters:

Cluster collisions release the largest amount of energy in a single event since the Big Bang. It’s not a quick process, though: astronomers estimate that the two clusters that make up Abell 3667 have been running into each other for about two billion years.

Their merger has thrown up a shock wave that’s expanding at about 4.3 million kilometres per hour. 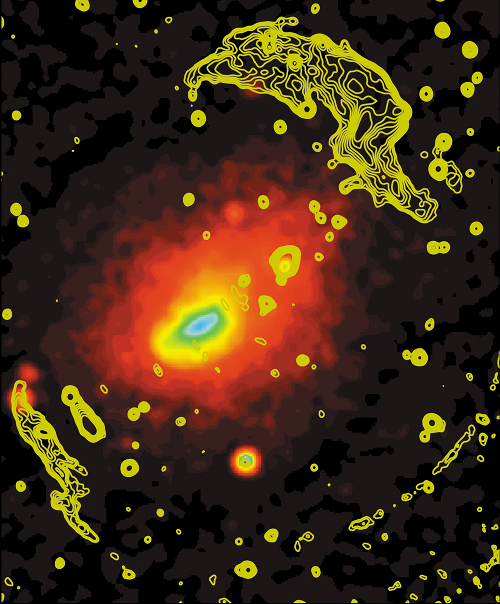 Galaxy cluster Abell 3667. Contour lines are the arcs of radio emission generated by the collision of the two smaller clusters that make up A3667. The coloured image is a view of the cluster in X-rays. (Data: CSIRO Australia Telescope Compact Array and the ROSAT satellite.)

Using the Parkes telescope, the astronomers found a “bridge” of radio waves running between the shock front and the centre of the cluster.

They suspect this marks a “wake” of turbulent magnetic field that was stirred up when the shock front passed through. 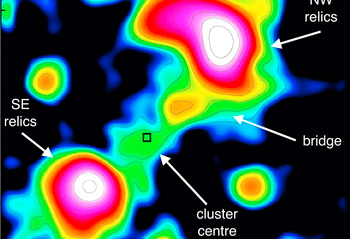 The finding lends support to a particular model of how the shock wave creates the radio emission.

And it puts Abell 3667 among the half-dozen colliding clusters that show such a “bridge” — as the best and clearest example to date.

Publication: E. Carretti et al. “Detection of a radio bridge in Abell 3667”. Accepted for publication in the Monthly Notices of the Royal Astronomical Society. Online:http://arxiv.org/abs/1205.1082

Previous post:
Students Drive the Dish
Coming up next:
Science: feelin' the love