Cooee! Sound-testing 1200 metres beneath the waves

Cooee! Sound-testing 1200 metres beneath the waves

We're using an echolocator to watch the daily migration of sea life rise up from depths to feed at dusk and then return back to the depths at dawn. But some fish have oil-filled bladders rather than a gas bladder making their reflection weak and difficult to count. That's where our special camera comes in. 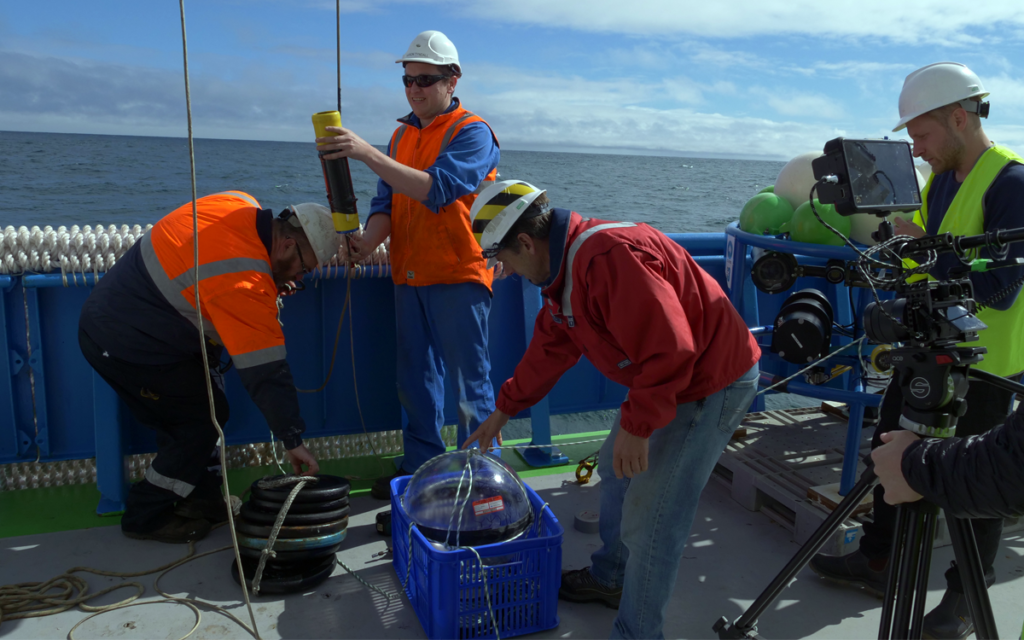 The acoustic calibration toolkit: ropes, weights, a large glass sphere, and a USBL positioning system to help the ship locate itself exactly over the sphere, which will be lowered to depths of 1200 metres. Image: Bethany Green

An echosounder is a device designed to send a pulse of sound down to the seabed below. This pulse of sound then reflects back when it encounters the seafloor, or life, such as fish, squids, jellies and krill. The most amazing event we have seen captured by the echosounder is the daily migration of sea life (including fishes). These creatures rise up from depths of 800 metres to the surface to feed at dusk and then return back to the depths at dawn. This is part of the largest daily migration of animals in the world, with estimates of fish biomass alone from one to 20 Giga tonnes. That is five to 100 times more than the weight of all humans on the planet! 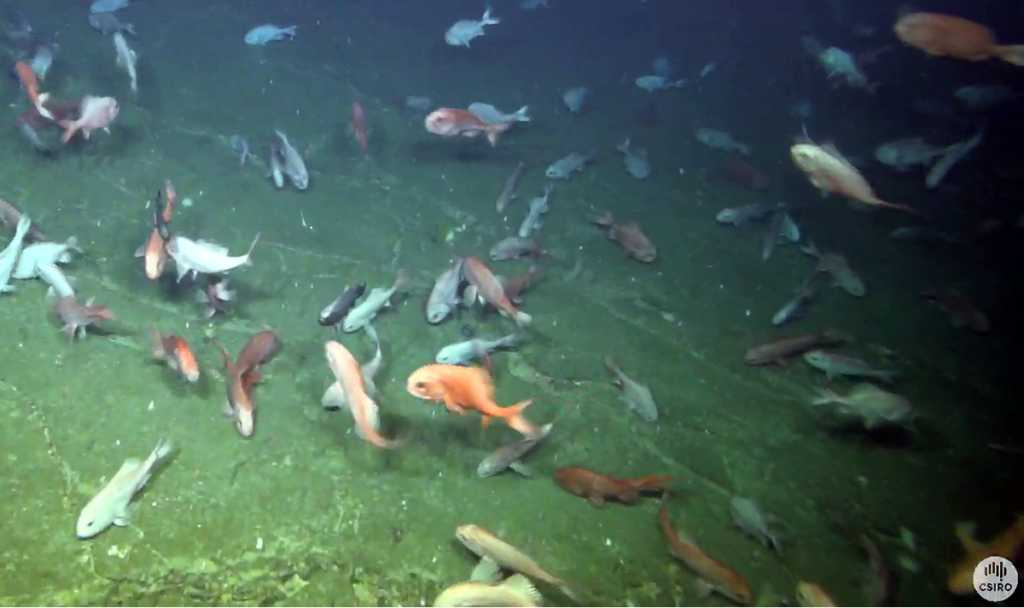 An orange roughy school encountered by the deep-tow camera. Orange roughy are difficult to detect with the vessel mounted echosounder because their oil-filled swim bladders provide weak sound reflection.

Closer to the seamounts, approximately 1000 m below the surface, we are observing schools of fish that we are eager to discover more about, specifically their numbers. Orange roughy are of special interest as they have been known to occur here in “feeding aggregations” over the summer period. However, as orange roughy have oil-filled bladders rather than a gas bladder, they have a weak reflection and are difficult to count. 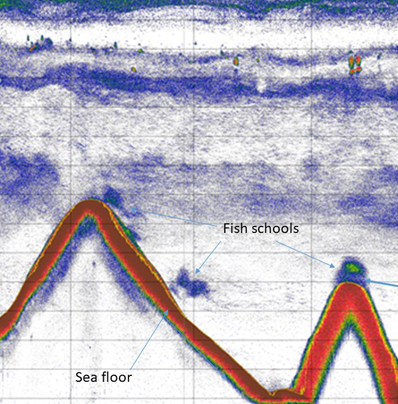 An echogram of the seamounts. The red areas depict the seafloor at 700 to 1400 m depth, with fish schools marked in blue nearby. Video captured through the school of fish on top of the deeper seamount featured many “oreos”

During this trip, we have seen many schools of fish on the seamounts. These are more likely to be “oreos”, a species of fish with a gas bladder that scatters sound strongly. This is also supported by the footage we have seen from the towed camera.

The deep water video footage has been fantastic to watch as it helps us understand the types of life we are sounding. Through the water we are seeing a large array of jelly-like organisms. One of our favourites is the top predator fish eating siphonophore. We have seen large (up to two-metre-long) specimens that, due to a large gas float, also scatter sound strongly! Closer to the seafloor we are seeing the fishes – oreos, orange roughy, whip tails, sharks and eels among others – that help us classify the acoustic records to estimate numbers.

To improve our ability to count the fish we have done a unique experiment to calibrate our recordings. This experiment involves lowering a very large gas-filled glass ball off the side of Investigator, deep below the water’s surface. Using sophisticated positioning systems and ship manoeuvrability we have been able to measure the glass ball position and strength up to depths of 1200 m. We are optimistic that this will improve our ability to count fish at longer ranges!

Under pressure: our custom-built deep tow camera gives us a window into the deep

Previous post:
Here’s the seafood Australians eat (and what we should be eating)
Coming up next:
Where are all the women in STEM?