Passenger airport security, particularly in Australia, is a rigorous and effective process. Seen an episode of Border Security lately? Customs inspectors find all sorts of strange and nasty contraband, often via the hands-on, inspection method.

So, what about the mass of cargo that’s transported by air on passenger planes? Until recently, it’s been difficult to scan air cargo efficiently and implement an effective method at thousands of airports around the world, leaving a large amount of air cargo unscanned.

But before you get nervous about your next flight and the types of things that could be hiding below your seat, rest assured that on-mass air cargo security has just become a whole lot more stringent with the development of our next generation air cargo scanner.

This CSIRO technology, developed in partnership with Chinese company Nuctech, uses novel neutron technology and x-ray systems to reveal contraband and dangerous goods in packaged cargo before being loaded onto the plane.

Commercialised last year, the scanner can rapidly distinguish up to 250 different types of substances, using a colour-code system to highlight various materials, while predicting the composition as well as the shape and density of an object. It can detect things such as illegal drugs, weapons and explosives.

The scanner has already been installed and is in use at Abu Dhabi Airport in the United Arab Emirates and at Nikola Tesla Airport in Serbia.

This example of an air cargo scanner image reveals a mix of materials contained in an unpacked package: 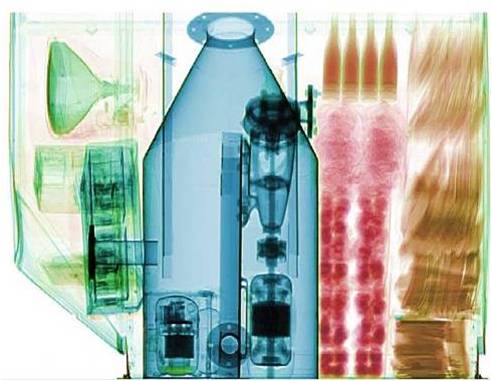 The air cargo scanner was built on previous CSIRO-developed technology to provide sharper, high-resolution images that provide more accurate detail on material than ever before.

Check out our air cargo scanner in action on ABC TV’s Catalyst.