Charging ahead in the motoring world

Charging ahead in the motoring world 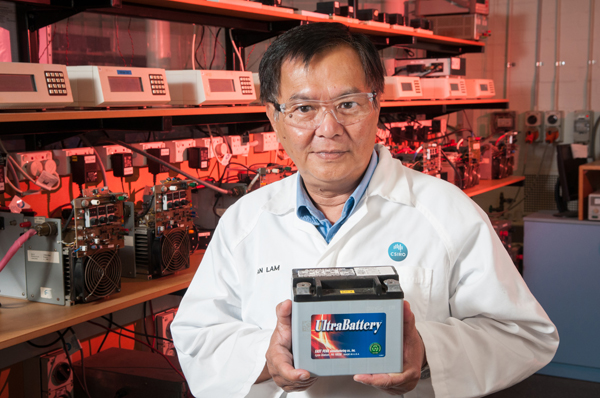 This year’s Tokyo Motor Show featured the full gamut of the car world’s creativity – from sporty tractors and sleek roadsters to minute commuter vehicles and hydrogen-powered prime movers. The next-generation Mars Rover and a giant statue of a toddler weeing even made an appearance.

But discreetly hidden amongst the glitz, glamour and occasional wackiness of this super-charged event – deep inside the bowels of the newly unveiled Honda Odyssey – was one of CSIRO’s quiet achievers: the UltraBattery.

The UltraBattery is a clever combination of the traditional lead-acid battery (found in cars) and a supercapacitor (like the one that powers your camera flash), resulting in an economical, super fast-charging battery with long-life power.

In its first commercial vehicle installation, the UltraBattery will give the Odyssey’s engine the oomph of power it needs when accelerating – previously a challenge for conventional batteries in cars with idle start-stop (that’s where a car’s engine turns off briefly when you’re idling at the lights, for example). This will save you fuel and reduce emissions without making you look like a loser stalled when the light turns green.

The UltraBattery produces 50% more power than conventional battery systems, with a life cycle that is at least four times longer. It’s also about 70% cheaper than batteries currently used in hybrid-electric vehicles, and up to 95% of the material in the battery can be recycled.

In a nifty example of helping drive innovation in Australia, CSIRO’s technology has been licensed to the Furukawa Battery Company (Japan) and East Penn Manufacturing (United States) for motor vehicle applications through the US, Japan, Thailand, Mexico, Canada and China; and to CSIRO spin-out company Ecoult for stationary applications.

Australians will have a chance to take the UltraBattery for a spin when the new Odyssey steers its way onto our shores early next year.

Previous post:
Factory Acceptance Testing of the TRIAXUS!
Coming up next:
Four Degrees of Global Warming: Australia in a hot world