Catching up with the Speartooths: new shark specimens discovered

Catching up with the Speartooths: new shark specimens discovered

A team of our scientists has caught and tagged the first ever adult Speartooth Shark specimens in the waterways of Cape York. 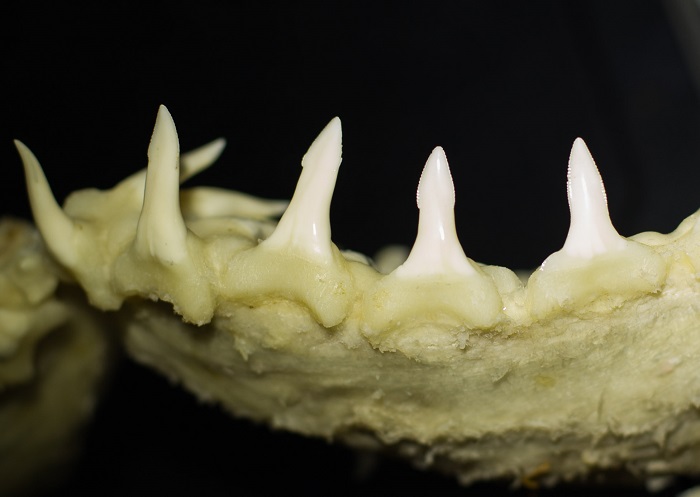 The teeth of a Speartooth Shark – it’s not just a name!

For decades the Speartooth Shark of northern Australia has been an enigma. The Speartooth is a species of whaler shark, and is often confused with bull sharks due to a similar colouration and preference for rivers over ocean. Only discovered in 1982, the elusive species has kept itself a mystery from the eyes of science, with only a handful of juvenile specimens having been caught and examined.

Being a critically endangered species, scientists wanted to know as much as they could about the Speartooths: their population size and distribution, their diet, what threats they may be facing. But with all kids and no parents, it would have been easy for us to wonder – were the juvenile Speartooths Home Alone? And what might this mean for their future?

All of this has changed, thanks to a team of our scientists (along with some help from the Australia Zoo) catching and tagging the first ever adult Speartooth Shark specimens in the waterways of Cape York. The female and male – measuring in at 2.2m and 2.3m respectively – dwarf the previous largest specimen, which was a paltry 189cm in comparison. 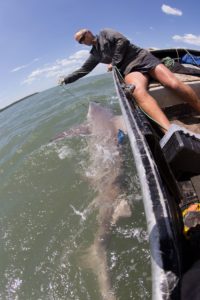 Tagging a 2.3 metre long shark is no easy task!

Understandably, our scientists are excited.

“We’ve been conducting research into the movement and population status of juvenile Speartooth Shark in the Wenlock River since 2006, and due to our long-term research we now know that juveniles are restricted to a few river systems in the Northern Territory and Queensland,” said our lead researcher, Dr Richard Pillans.

“But the lack of records of adults is a key gap in our understanding of this species – until now.”

According to Richard, the chances of catching the adult specimens were incredibly small. “We know from catching newborn Speartooth Shark with open umbilical scars in late October – December that the females are giving birth during this period, but preliminary estimates of the total female adult population were for less than 500 sharks,” he said.

Despite these low odds, over nine days of intensive sampling Richard, Barry Lyon and Luke Burnett (Australia Zoo) managed to capture two adult Speartooth Shark – the first records of adults of this species in Australia and the first live specimens recorded by researchers anywhere.

“We hope that the information obtained from these tags will provide the first data on where adult Speartooth Shark live, with this data critical to obtaining a better understanding of threats to this endangered species,” says Richard.

“We currently have no idea where the adults occur, all we know is that they are found in marine environments somewhere off the northern Australian coast.”

Both individuals were tagged with satellite tags that will detach after around two months of swim time, and will provide vital information on where the sharks have moved to in this time. The tags also collect water temperature and depth which can be used to reconstruct the movement pathways and provide detailed information on the habitat preferences of this species.

For more information on our shark tagging program, visit our website.

Previous post:
The tough life of a soil crust
Coming up next:
Southern Surveyor: Stories from on board Australia’s ocean research vessel – Professor Richard Arculus