How bushfires and rain turned our waterways into ‘cake mix’, and what we can do about it

How bushfires and rain turned our waterways into ‘cake mix’, and what we can do about it

After the Black Summer bushfires, heavy rains extinguished many fires but turned high quality water in our rivers to sludge. This is how we can better prepare for next time.

As the world watched the Black Summer bushfires in horror, we warned that when it did finally rain, our aquatic ecosystems would be devastated.

Following bushfires, rainfall can wash huge volumes of ash and debris from burnt vegetation and exposed soil into rivers. Fires can also lead to soil “hydrophobia”, where soil refuses to absorb water, which can generate more runoff at higher intensity. Ash and contaminants from the fire, including toxic metals, carbon and fire retardants, can also threaten biodiversity in streams.

As expected, when heavy rains eventually extinguished many fires, it turned high quality water in our rivers to sludge with the consistency of cake mix.

In the weeks following the first rains, we sampled from these rivers. This is what we saw.

Of particular concern was the upper Murray River on the border between Victoria and NSW, which is critical for water supply. There, the bushfires were particularly intense.

We collected water samples in the upper Murray River in January and February 2020 to assess impacts to riverine plants and animals.

Our water samples were up to 30 times more turbid (cloudy) than normal, with total suspended solids as high as 765 milligrams per litre. Heavy metals such as zinc, arsenic, chromium, nickel, copper and lead were recorded in concentrations well above guideline values for healthy waterways. 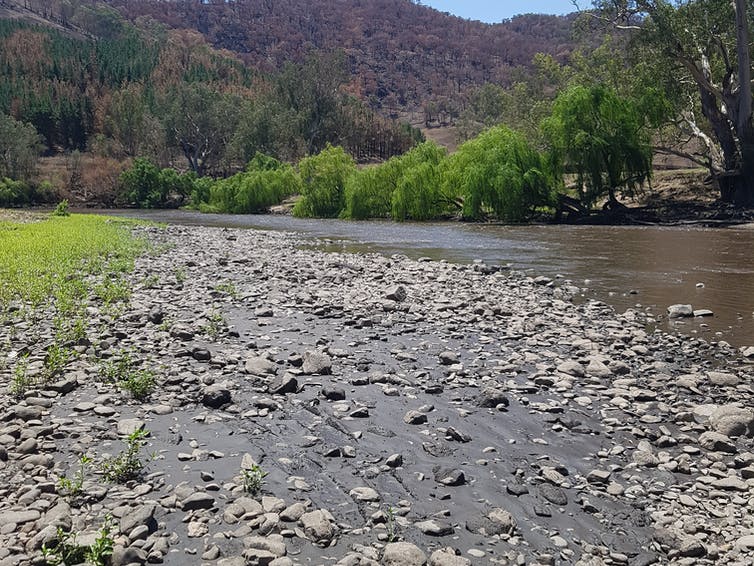 We took the water collected from the Murray River to the laboratory, where we conducted a number of toxicological experiments on duckweed (a floating water plant), water fleas (small aquatic invertebrates) and juvenile freshwater snails.

During a seven-day exposure to the bushfire affected river water, the growth rate of duckweed was reduced by 30-60%.

The water fleas ingested large amounts of suspended sediments when they were exposed to the affected water for 48 hours. Following the exposure, water flea reproduction was significantly impaired.

And freshwater snail egg sacs were smothered. The ash resulted in complete deaths of snail larvae after 14 days.

These sad impacts to growth, reproduction and death rates were primarily a result of the combined effects of the ash and contaminants, according to our preliminary investigations.

But they can have longer-term knock-on effects to larger animals like birds and fish that rely on biota like snail eggs, water fleas and duckweed for food.

What happened to the fish?

Immediately following the first pulse of sediment, dead fish (mostly introduced European carp and native Murray Cod) were observed on the bank of River Murray at Burrowye Reserve, Victoria. But what, exactly, was their cause of death? 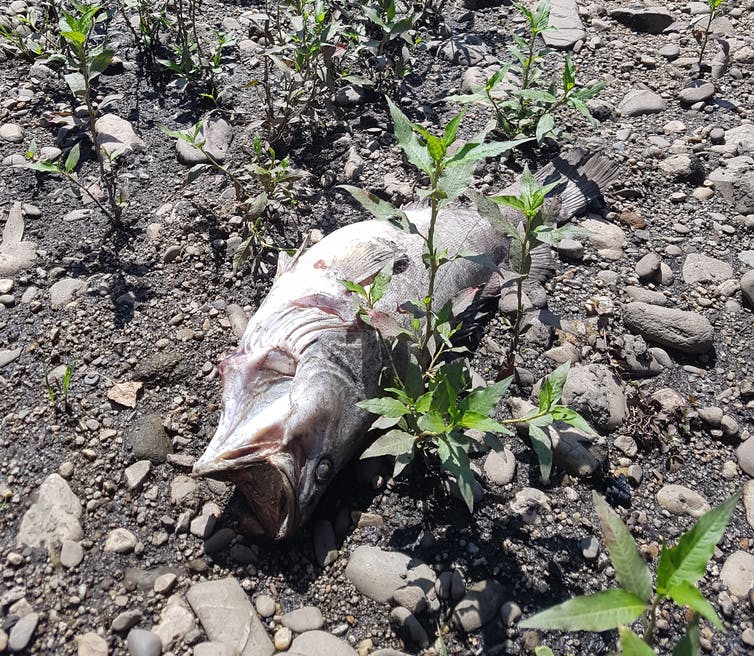 A dead Murray Cod found on the banks of the Murray River following storms after the bushfires.
Paul McInerney/Author Provided

Our first assumption was that they died from a lack of oxygen in the water. This is because ash and nutrients combined with high summer water temperatures can trigger increased activity of microbes, such as bacteria.

This, in turn can deplete the dissolved oxygen concentration in the water (also known as hypoxia) as the microbes consume oxygen. And wide-spread hypoxia can lead to large scale fish kills.

But to our surprise, although dissolved oxygen in the Murray River was lower than usual, we did not record it at levels low enough for hypoxia. Instead, we saw the dead fish had large quantities of sediment trapped in their gills. The fish deaths were also quite localised.

In this case, we think fish death was simply caused by the extremely high sediment and ash load in the river that physically clogged their gills, not a lack of dissolved oxygen in the water.

These findings are not unusual, and following the 2003 bushfires in Victoria fish kills were attributed to a combination of low dissolved oxygen and high turbidity.

So how can we prepare for future bushfires?

Preventing sediment being washed into rivers following fires is difficult. Installing sediment barriers and other erosion control measures can protect specific areas. However, at the catchment scale, a more holistic approach is required.

One way is to increase efforts to re-vegetate stream banks (called riparian zones) to help buffer the runoff. A step further is to consider re-vegetating these zones with native plants that don’t burn easily, such as Blackwood (Acacia melanoxylin).

Streams known to host rare or endangered aquatic species should form the focus of any fire preparation activities. Some species exist only in highly localised areas, such as the endangered native barred galaxias (Galaxias fuscus) in central Victoria. This means an extreme fire event there can lead to the extinction of the whole species. 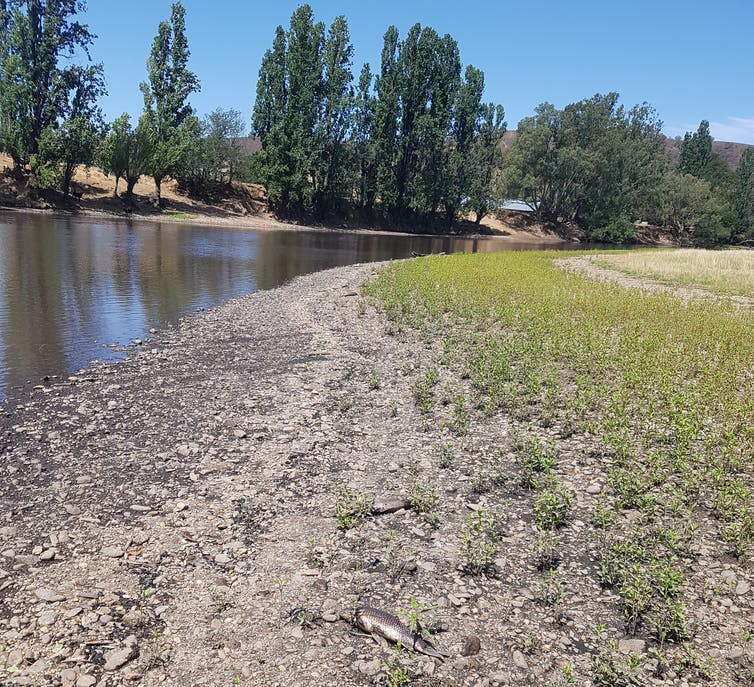 That’s why reintroducing endangered species to their former ranges in multiple catchments to broaden their distribution is important.

Increasing the connectivity within our streams would also allow animals like fish to evade poor water quality — dams and weirs can prevent this. The removal of such barriers, or installing “fish-ways” may be important to protecting fish populations from bushfire impacts.

However, dams can also be used to benefit animal and plant life (biota). When sediment is washed into large rivers, as we saw in the Murray River after the Black Summer fires, the release of good quality water from dams can be used to dilute poor quality water washed in from fire affected tributaries.

Citizen scientists can help, too. It can be difficult for researchers to monitor aquatic ecosystems during and immediately following bushfires and unmanned monitoring stations are often damaged or destroyed.

CSIRO is working closely with state authorities and the public to improve citizen science apps such as EyeOnWater to collect water quality data. With more eyes in more areas, these data can improve our understanding of aquatic ecosystem responses to fire and to inform strategic planning for future fires.

These are some simple first steps that can be taken now.

Recent investment in bushfire research has largely centred on how the previous fires have influenced species’ distribution and health. But if we want to avoid wildlife catastrophes, we must also look forward to the mitigation of future bushfire impacts. 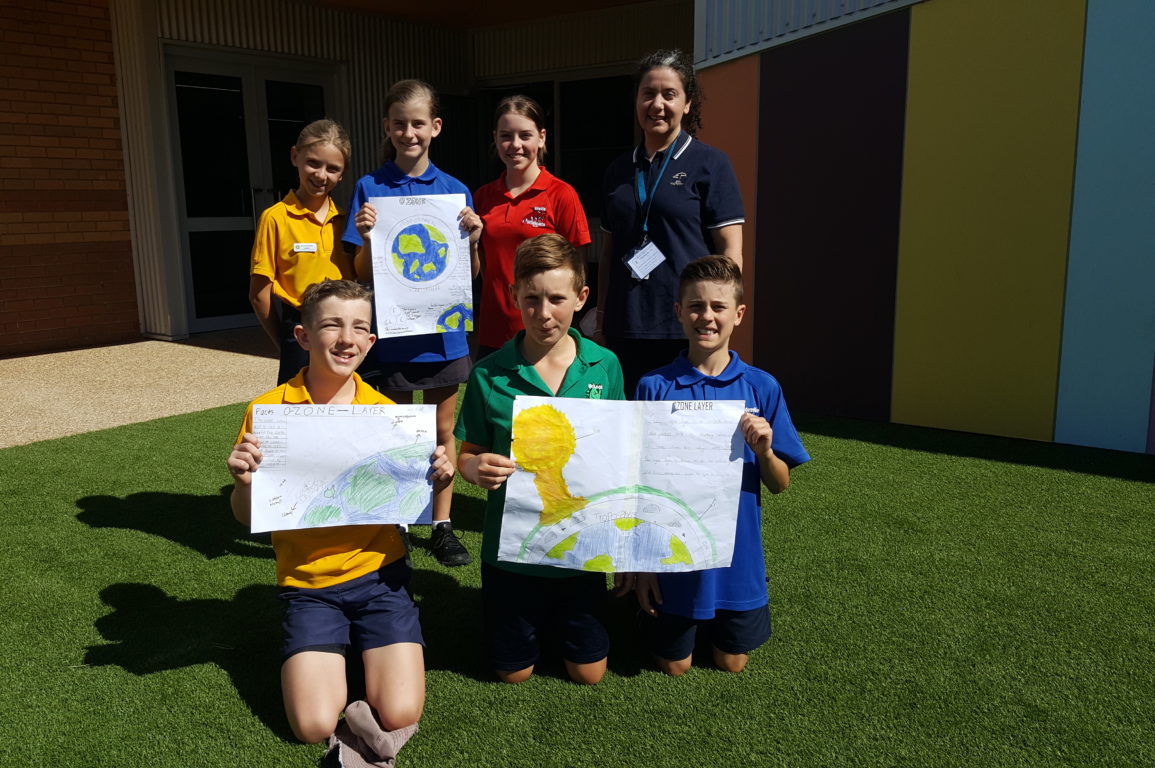