Bushfires kill, but knowledge might make them less deadly

Bushfires kill, but knowledge might make them less deadly

Our researchers have compiled 100 years of bushfire statistics to better understand the characteristics of Australia's summer bane. 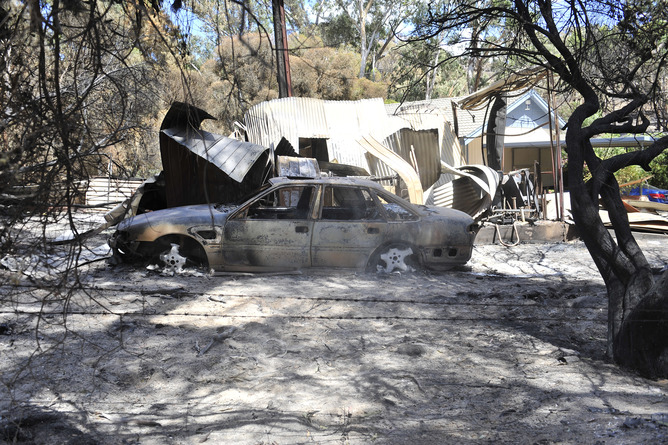 Burnt out car and buildings in Kersbrook area as fires continue to burn through the Adelaide Hills, Wednesday, Jan. 7, 2015. (AAP Image/David Mariuz) NO ARCHIVING

Whether leaving early or staying to defend, a reliable and adaptable bushfire survival plan is a must. AAP Image/David Mariuz

The latest round of bushfires, which claimed 27 homes in the Adelaide Hills, has once again highlighted the importance of planning for the worst. Mercifully, no human lives were lost, and it will be important to learn whatever lessons we can to avoid future tragedies.

My colleagues and I analysed 825 deaths in 260 Australian bushfires from 1901 to 2011, and our research has revealed some compelling evidence to help guide residents to plan for future bushfires.

Most people (58%) lost their lives when caught out in the open. Strikingly, 72% of those people were within 200 m of their own homes (this statistic is based only on cases where details are accurately known).

I encourage you to imagine what circumstances and decisions might have led to these outcomes. Do a large number of people simply wait to see if the fire is really going to arrive on their doorstep?

Bushfire deaths within a house are most prevalent during our most severe fire events, representing 75% of all fatalities during bushfires that occurred on days with “catastrophic” (code red) fire danger conditions. This is despite them representing only 27% of all bushfire deaths.

Of those who died inside homes, 92% were in rooms that did not have a door that led directly to the exterior of the house (once again, this is based only on cases where circumstances are accurately known). This raises uncomfortable questions: why did these people apparently not try to leave the home as the house fire developed? Were they monitoring the conditions outside as the fire passed? Had they thought about which exit was the safest?

When a fire arrives at a property, the house will experience “ember attack”. This attack is strongest as the main fire arrives and will persist for a long time after it has passed, and may also start to happen before the fire actually arrives. If the house is close enough to the bush it may also be affected by radiant heat, and if very close then direct flame contact is possible, although most houses are lost without any direct interaction from a bushfire front – which goes some way to account for the seemingly random loss patterns that occur.

Given the timing and intensity of ember attack, it is no surprise that our data show that houses can ignite before, during, and after a fire front’s passage – with the most likely time being during and immediately after the fire front has passed.

For the relatively small number of houses that ignite before the fire front arrives, the occupants may be faced with life-threatening conditions both inside and outside at the same time. There are also a few cases were houses are built so close to the bush or other combustible elements that even the low-level fire that persists after the main fire front has passed is too intense to survive outside.

Nevertheless, for the vast majority of homes that burn in bushfires, it is likely that at any given time, conditions would be survivable either inside or outside the house. That means that, with the right strategy, lives should not be lost.

It is interesting to note that the current building codes for bushfire-prone areas include specific fire weather severity limits beyond which these standards may no longer be effective. The standards aim to reduce the risk that a building will catch fire, but they also rule out any guarantee that it won’t. The code also doesn’t address the issues of how fast burning homes might succumb, or of how to provide a safe or effective exit path from the building.

So even if your bushland home is fully up to code, you need to plan for a wide range of scenarios. Fire agencies across Australia have stressed the importance for people living in bushfire-prone areas to develop a fire survival plan, and your local fire agency is the best place to start on developing a plan and educating yourself about the specific local fire conditions you might face.

Once a plan has been developed I encourage residents to test their fire plan by checking whether it answers the following questions:

A deep understanding of the nature of bushfire threat is your best tool in assessing and managing your own risk.

Previous post:
Viva Parkes-Vegas!
Coming up next:
5 ways high-tech light bulbs can brighten up your life