Bushfire resilience: preparing yourself and your property

Bushfire resilience: preparing yourself and your property 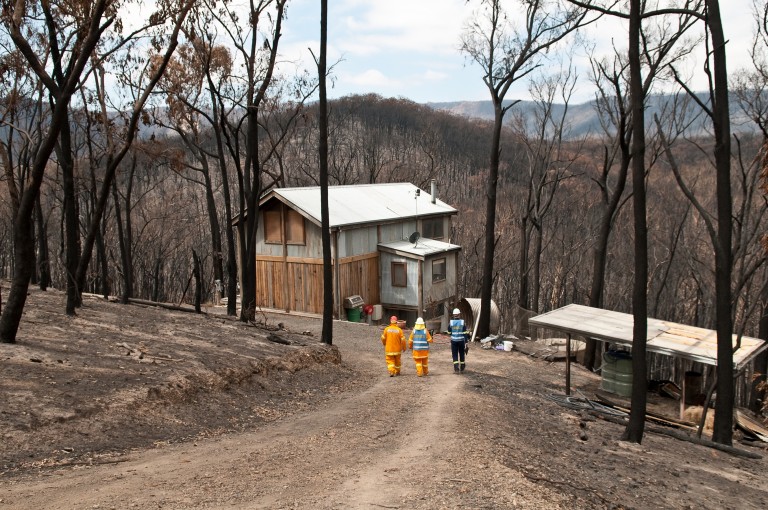 When we think of resilience, we tend to think of our ability to adapt to stressful situations and survive them. In ecological terms, resilience represents something similar; the ability of an ecosystem to resist damage and recover quickly from it.

When it comes to a bushfire, resilience is even more complex because it encompasses not just structures, but also individuals, communities and the environment in which they all exist.

We are only as resilient as the weakest link in that chain; a house built to the most stringent bushfire standards but with flammable shrubbery and trees growing right next to it is as vulnerable as an older, less bushfire-proof house that has a large cleared area around it. Similarly, a well-prepared house is effectively useless if the person living in it does not have a carefully thought-through plan for what to do when a bushfire threatens.

“The number of times we’ve done post-bushfire surveys, reviewing the circumstances around someone’s death, and you see a house that had a lot of things going for it, they had gone and done x, y and z, but in the end they just went into the bathroom and died in a house fire,” says our fire expert Justin Leonard.

“All that extra work and features weren’t helpful in the end because it wasn’t a complete package.”

The idea of bushfire resilience has changed, particularly with recent catastrophic fire events such as Victoria’s Black Saturday tragedies. We used to think that any bushfire was survivable as long as we were well prepared and equipped to defend our homes. Black Saturday brutally demonstrated that bushfire severity is an open-ended scale, and just when we think we’ve got the hang of it, nature pulls the rug out from under us.

“People shifted their philosophy to ‘there’s probably a threshold for which my circumstances are reasonably safe but above which they’re not’,” Leonard says.

Instead of the assumption that one can reasonably expect to defend one’s castle in a bushfire event, people living in bushfire-prone areas are now accepting that loss of property is not only possible but infinitely preferable to loss of life.

So how do we prepare and defend against bushfires? Bushfire resilience means not only does a house need to be designed according to its ‘bushfire attack level’, or BAL, rating, but the landscape around that house needs to also be carefully maintained to lower bushfire risk.

The people living in those houses need to understand the particular bushfire characteristics of their environment and their house and armed with that information, know how to maintain their house and behave appropriately when a bushfire comes through.

While there are housing standards tailored to the higher BAL (Bushfire Attack Level) ratings – which influence things such as window design and protection, roof construction and building materials – most Australians are living in houses that were built in earlier, less bushfire-conscious times.

In this case, where the building itself can’t easily be adapted, it’s about understanding the local landscape and how it might respond to a bushfire event.

It’s like examining the layers of an onion, Leonard says, starting with the outermost layer – the local setting in which a property is located. For example, is it a mountainous, bushy region like the Blue Mountains, or flat plains that have been largely cleared of vegetation?

“That starts to quantify what the fire might look and feel like when it ends up at the back fence, but also what’s going to come with the fire, like do I have to worry about fire-induced winds that might damage the house before the fire even turns up,” Leonard says.

The next layer of the bushfire ‘onion’ is conditions 100-200 metres from the property’s boundaries; is there dense bush right up to the fenceline, or has it been tramped down and thinned because people collect firewood? Is there a steep slope?

Coming closer to the house, is there a cleared area between the boundary and the house, or trees with grass underneath?

Answering these questions and adapting the house accordingly can make a huge difference to the severity and impact of a bushfire once it reaches a house.

“The onion approach helps build the context up and then when you start looking at the house in that context that you can see the weak links, and it’s only when you address all those weak links that the risk is appropriately addressed,” Leonard says. 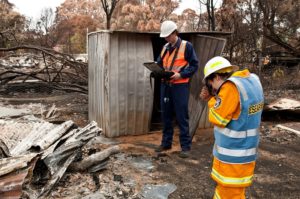 But the other half of the equation is our own bushfire plan; planning how we will act when a bushfire sweeps through. Simply deciding to leave before the main front arrives is not a detailed enough plan, Leonard says. You also need to think about at what point it is no longer safe to make this journey, and how the bushfire will impact your house, and how best you can work with the house to survive.

“Then you say, what are all the ways that bushfire arrival could ignite or damage my house and if that occurred, how would the house respond to those processes?” he says.

For example, retreating to the bathroom may not help you if the house is burning down around you. A more viable plan might be to retreat to an exit with the best prospects of reaching a cleared area on your property and then as the house reaches its final stage of being tenable inside you leave the house before it overcomes you.

Hopefully by that time the fire has passed and you’re leaving on to burnt ground.

“What are the best and worst range of outcomes that can play out and how many back-up plans do you have?” Leonard asks.

“When you stand back and look at that whole picture, the knowledge that’s in the head of the person — being able to make the best decisions at every point in time as something unfolds — is more important than all the things they’ve done about improving their prospects.”

Find out more about our work in natural disaster response and mitigation at #CSIROalert.

Previous post:
Bushfire basics: what you need to know
Coming up next:
ASPIRE to do better with waste