We recently detected the signature of fierce space weather from Proxima Cen, which implies an orbiting planet could be blasted with hazardous particles and magnetic fields. 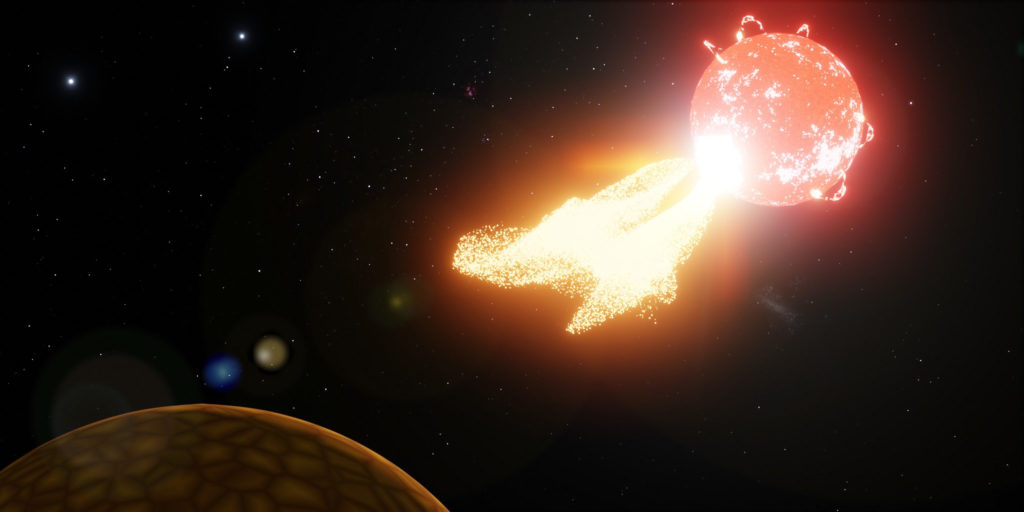 If you look up in the southern sky you can see the “pointer” stars, pointing towards the Southern Cross. One of these pointers is Alpha Centauri, which is actually a pair of Sun-like stars that are too close together to tell apart by eye.

There is a third member of the Alpha Centauri system as well: Proxima Centauri (Proxima Cen for short), which circles the central two stars in a wide orbit. This is the Sun’s nearest neighbour, at a distance of just 4.2 light years.

It is possible one of Proxima Cen’s planets is suitable for life. However, we recently detected the signature of fierce space weather from Proxima Cen, which implies an orbiting planet could be blasted with hazardous particles and magnetic fields.

Our Sun is a relatively unremarkable yellow dwarf star, hosting the only known life-bearing planet in the Universe: our Earth.

Proxima Cen is very different. It is a red dwarf star, with a diameter only 15% of the Sun’s, and a surface temperature of 3,000K (degrees Kelvin), much cooler than the Sun’s 6,000K.

Because Proxima Cen is relatively cool, the “Goldilocks zone” of orbits around it – where the temperature is just right for liquid water – is around one-twentieth the Earth’s distance from the Sun. We are interested in planets in a star’s Goldilocks zone because liquid water is necessary for life as we know it.

We know Proxima Cen has at least two planets: Proxima Cen b, a rocky “super-Earth” located in the middle of Proxima Cen’s Goldilocks zone, and Proxima Cen c, a “sub-Neptune” located further out.

For years, astronomers have suspected planets like Proxima Cen b may be a dangerous home for life because they are so close to their host stars. Many red dwarf stars produce frequent, powerful flares – intense bursts of radiation travelling out into space. If planets like Proxima Cen b don’t have protective features such as a thick atmosphere or a strong magnetic field, they would be exposed to perilous levels of radiation. 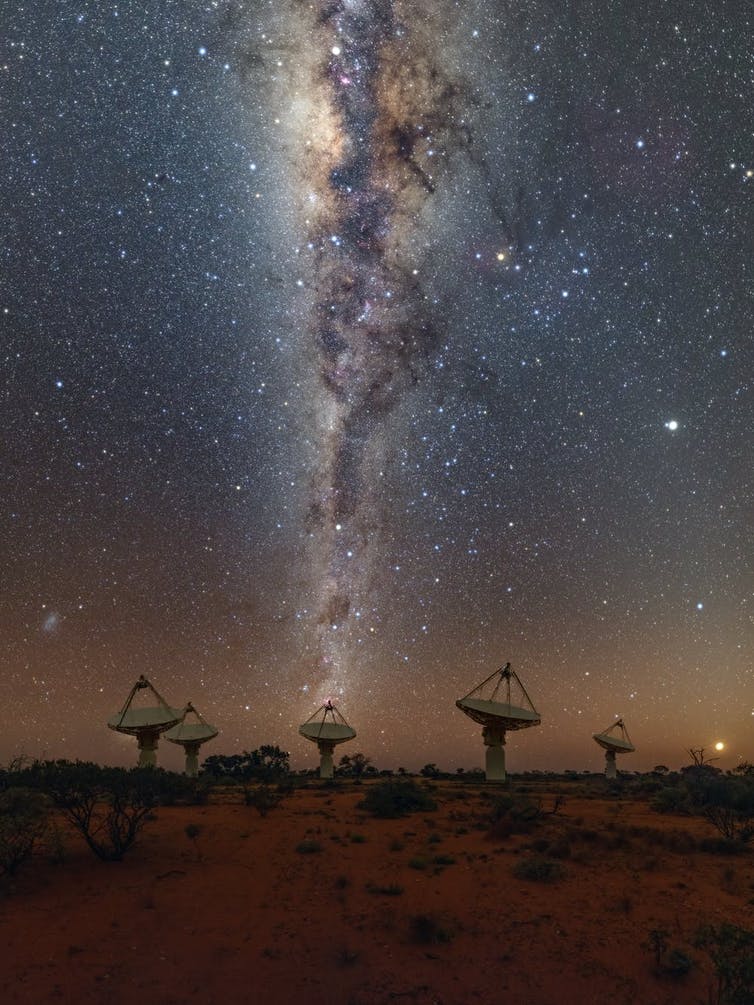 Five of the 36 ASKAP antennas poised below a vista of the Milky Way. The Southern Cross and the Pointers are visible just above the central antenna in the image. IMAGE: CSIRO/Alex Cherney

The “space weather” of red dwarfs is another important factor in determining how hospitable they are to life. While flares involve intense bursts of light, space weather events mean the magnetic field and charged particles from the star can interact with planets directly.

The most energetic space weather events are known as coronal mass ejections (or CMEs). These massive eruptions escape the atmosphere of a star and travel through space at millions of kilometres per hour.

If the space weather conditions are extreme enough, the planetary atmosphere can be blown away and its magnetic field can be pushed backwards, leaving the surface exposed to deadly flare radiation.

CMEs have been detected around the Sun since the 1970s, but detecting space weather events around distant stars is much harder.

A sequence of powerful coronal mass ejections from the Sun, observed by the ESA/NASA Solar and Heliospheric Observatory (SOHO). The Sun is located behind the central masked circle. IMAGE: ESA/NASA/SOHO

For updates on the weather, tune into the radio

CMEs on the Sun produce characteristic bursts of radio noise, such as “type II” and “type IV” bursts. By detecting similar signatures on other stars, we can indirectly identify stellar CMEs.

Our goal was to detect the signature of a CME.

On the night of May 2, 2019, we observed a massive optical flare with an estimated total energy output of 16 septillion joules. (That’s nearly 17 million years’ worth of Australia’s current electricity output.) On the Sun, flares this big happen only once every decade or two. But on Proxima Cen, they happen every few weeks.

With the amazing detail revealed with ASKAP, we could see we had detected the best example of a solar-like type IV radio burst from another star to date.

This blast of radio waves implies the space weather environment around Proxima Cen is quite violent. 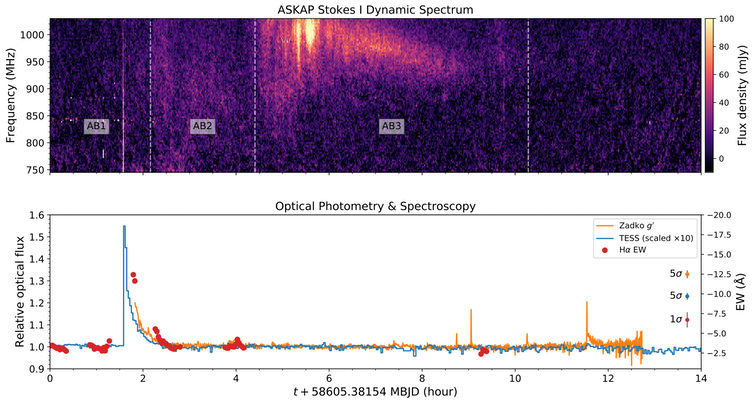 Radio and optical data from Proxima Cen on the night of May 2 2019. The top panel shows the ASKAP ‘dynamic spectrum’, showing how the intensity varies with radio frequency and time. The bottom panel shows data from optical telescopes, revealing a powerful outburst of radiation. When paired together, the occurrence of powerful radio bursts associated with flaring activity becomes clear. IMAGE: Andrew Zic/University of Sydney/CSIRO

‘One swallow does not make a summer’

In 1859, British astronomers Richard Carrington and Richard Hodgson made the first observations of a solar flare, which was followed by a massive space weather storm named the “Carrington event”. We now know the storm was caused by a massive coronal mass ejection hitting Earth.

Carrington noted the coincidence between these extraordinary events, but was cautious to draw any connection between them, famously stating “one swallow does not make a summer”. We now find ourselves in a similar situation to Carrington.

We have observed a radio burst signature implying a CME erupting from Proxima Cen. But to confirm the relationship of these stellar radio bursts with CMEs, we need to harness information from other wavelengths. Once we can do this, we should soon know exactly how hazardous it is to live next to a star like Proxima Centauri.

Previous post:
Introducing Edna: the chatbot trained to help patients make a difficult medical decision
Coming up next:
Up to 90% of electricity from solar and wind the cheapest option by 2030: CSIRO analysis