As a global energy superpower, Australia can and should play a significant role in ensuring that its exports contribute as few greenhouse emissions as possible. Exporting ideas, technologies and solutions can play an important part in achieving this outcome. 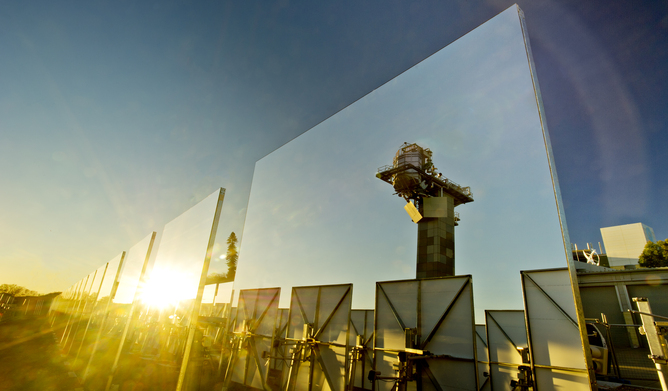 Our solar-concentrating heliostats can be used for several purposes, including creating high-energy ‘SolarGas’.

As climate negotiators meet at the United Nations’ Lima summit, which comes hot on the heels of the landmark US-China climate deal, there is a renewed focus on how the world can move to a lower-emissions future.

As a global energy superpower, Australia can and should play a significant role in ensuring that its exports contribute as few greenhouse emissions as possible. Exporting ideas, technologies and solutions can play an important part in achieving this outcome.

All of these exports drive economic growth and a higher living standard, not only in Australia but also in our customer countries. According to mainstream forecasts, this growth is set to continue.

Given the impact of our exports on global emissions, there is debate over whether Australia’s responsibility ends at the harbour gate or extends well beyond.

There are widely diverging responses to this question, ranging from proactive support of exports in the name of economic growth, to calls for an end to fossil fuel exports. Whatever your own position, there is one thing that everyone should be able to agree on: the need to accelerate the development and global deployment of cost-competitive, lower-emission energy technologies.

Developing cost-competitive clean energy technologies is no pipe dream. Australia can be proud of its impressive track record in this field. Take, for instance, solar photovoltaic technologies that have been developed at the University of New South Wales and successfully commercialised in China – an Australian invention now underpinning a significant share of the rapidly growing global solar industry.

Australian ingenuity is a great strength of our nation. Yet when it comes to innovations in the energy sector, we can be bolder. We should stop thinking of ourselves as only a minor contributor to a global effort. We should instead play a role that is commensurate with our status as one of the world’s leading exporters of energy.

A prosperous and sustainable future

Based on our own work at CSIRO, I can see no shortage of potential new ideas that could deliver a prosperous and sustainable energy future. Let me give you three examples.

The high levels of air pollution in China, combined with a rising demand for carbon dioxide for enhanced oil recovery, present a significant opportunity to work with China to develop the next generation of cheaper carbon-capture technologies. Australia has been collaborating with China in this area since 2008, working on the establishment of China’s first post-combustion carbon-capture pilot project. In 2012, Australia helped to launch a second pilot plant that is currently operating in Jilin province, with the capacity to capture 600 tonnes of carbon dioxide per year.

India is not just focused on buying Australia’s coal – it is also interested in Australian technologies such as “SolarGas”, which uses hi-tech “mirrors” to turn solar heat, water and natural gas into a high-value feedstock for the chemical industry. After the successful trial of a 250 kilowatt system in Australia, CSIRO is now discussing plans to build a pilot-scale SolarGas plant in India, where there is a large chemical industry and plenty of sunshine.

Finally, a technology called DICE — which stands for Direct Injection Carbon Engine — has the potential to significantly reduce emissions from coal-fired power stations. DICE is a high-efficiency diesel engine powered by a coal slurry – a mixture of finely ground coal with water. It has the potential to cut carbon emissions by 20-35% from black coal and by 35-50% from brown coal, compared with technologies currently used in Australia.

Much greater emissions reductions are possible if biomass is used as a feedstock instead of coal. DICE should also be able to respond quickly to fluctuating power demand, making it well suited to supporting the integration of renewable generators into our electricity grids.

Following successful tests in Australia over the past few years, CSIRO has now partnered with the global diesel engine manufacturer MAN Diesel & Turbo to develop the technology on a commercial scale. The next step will be a commercial-scale demonstration in Japan, supported by Australian coal industry. If everything goes to plan, the technology could be commercially available by the end end of this decade.

These are just three examples of many. Each technology faces its own unique technical and commercial challenges. Not everything will work, but neither will all of these attempts fail. By focusing on a mix of different technologies and approaches, I have no doubt that we will see several new technologies emerge that will help us not only to meet the growing energy needs of humankind, but also mitigate its negative environmental impacts.

New cost-competitive, low-emission technologies will be vital if Australia wants to continue to export fossil fuels. It is therefore in our interest to continue to collaborate with the world so that we can responsibly use these resources.

Frankly, our responsibility does not stop at the harbour gate.

Previous post:
Catching fire in a (big) bottle
Coming up next:
A new way to fix those frustrating websites