The new suite of mineral maps will enable mining companies to increase the efficiency and viability of their exploration efforts. 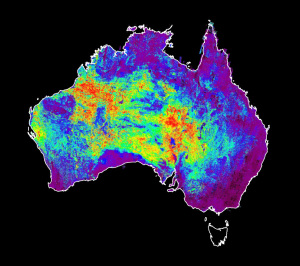 The world-first maps were generated from a ten-year archive of raw Advanced Spaceborne Thermal Emission and Reflection (ASTER) data collected by NASA and the Japanese Government’s Japan Space Systems.

CSIRO scientists have developed software that transformed the data into a continent-wide suite of mineral maps that show information about rock and soil mineral components and provide a Google-like zoom to view images from thousands of kilometres wide to just a few kilometres. They are already changing the way that geoscientists look for mineral deposits by providing more accurate and detailed information than ever before.

The ASTER maps represent a successful collaboration involving scientists from Japan, USA and Australia. Data access and software development has been coordinated by CSIRO through the Western Australian Centre of Excellence for 3D Mineral Mapping and territory Geological Surveys, AuScope, iVEC, NCI, JSS, NASA and the USGS.

Dr Mike Abrams from NASA and head of the US ASTER science team added, “Congratulations on an impressive project. I do like your idea of producing global geoscience maps, similar to what you have created for Australia”.
The Australian ASTER geoscience maps can be obtained from the AuScope Discovery Portal, the Western Australian Centre of Excellence for 3D Mineral Mapping and Geoscience Australia. State and territory coverage can also be acquired from the respective government geological surveys.

Previous post:
The smallest room on RV Investigator and the ship’s colours on show!
Coming up next:
Where are all the cabins and laboratories?