Despite our sometimes heated national debate about our energy future, Australia is well positioned to benefit from innovative low emission technologies. No matter which avenue we take to cleaner energy, our energy-rich resources means there are opportunities for Australian businesses – and cheaper energy for Australian consumers.

That’s the conclusion we reached in our Low Emissions Technology Roadmap, which outlines potential pathways for the energy sector to contribute to Australia’s emissions reduction target.

Our target under the Paris climate agreement calls for a 26–28% reduction of emissions by 2030 from 2005 levels. Our analysis also considers how the energy sector could meet the more ambitious aspiration of avoiding 1.5–2℃ global warming.

Looking past the political wrangling

Perhaps one of the reasons the energy debate in Australia is so vehement is that, with the exception of oil, we are rich in energy resources. While we cannot wait indefinitely, the lack of resource constraints means we can monitor and test what options emerge as the most cost effective. Technology neutrality is often called upon as a key policy design principle.

Another reason for caution is that technological change is inherently unpredictable. For example, at the start of this century, few would have expected solar photovoltaics to be one of the lowest cost sources of electricity. Current expectations of sourcing cost-effective bulk electricity storage would have seemed even less likely at the time.

However, there are two key choices that will determine how we reduce greenhouse gases, and the shape of our energy future.

First, we must decide how much weight we give to improving energy productivity, versus decarbonising our energy supply. This is essentially a policy decision: should we use our existing energy more intelligently and efficiently in our buildings, industries and transport, or aggressively pursue new technology?

Whatever strategy we pick, we also need to choose what technology we emphasise: dispatchable power, from flexible and responsive energy generation, or variable renewable energy (from sources like solar, wind and wave), supported with storage. 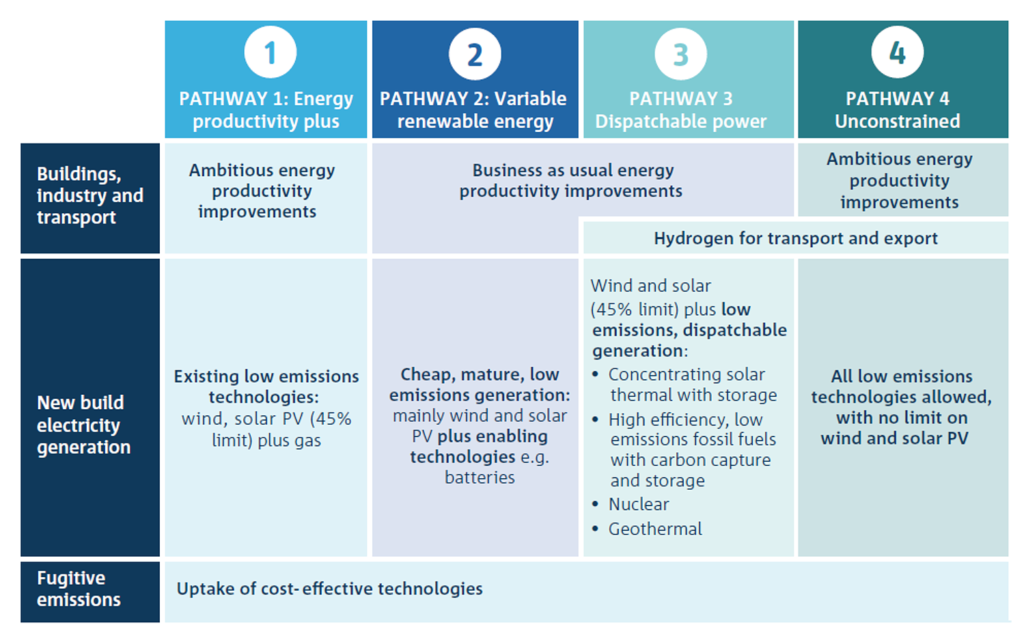 There are four broad pathways to cheaper, cleaner energy.

The main attribute that separates the pathways is the mix of risks they face. We’ve grouped risks into three categories: (1) technology, commercial and market risk, (2) social licence risk and (3) stakeholder coordination risk. 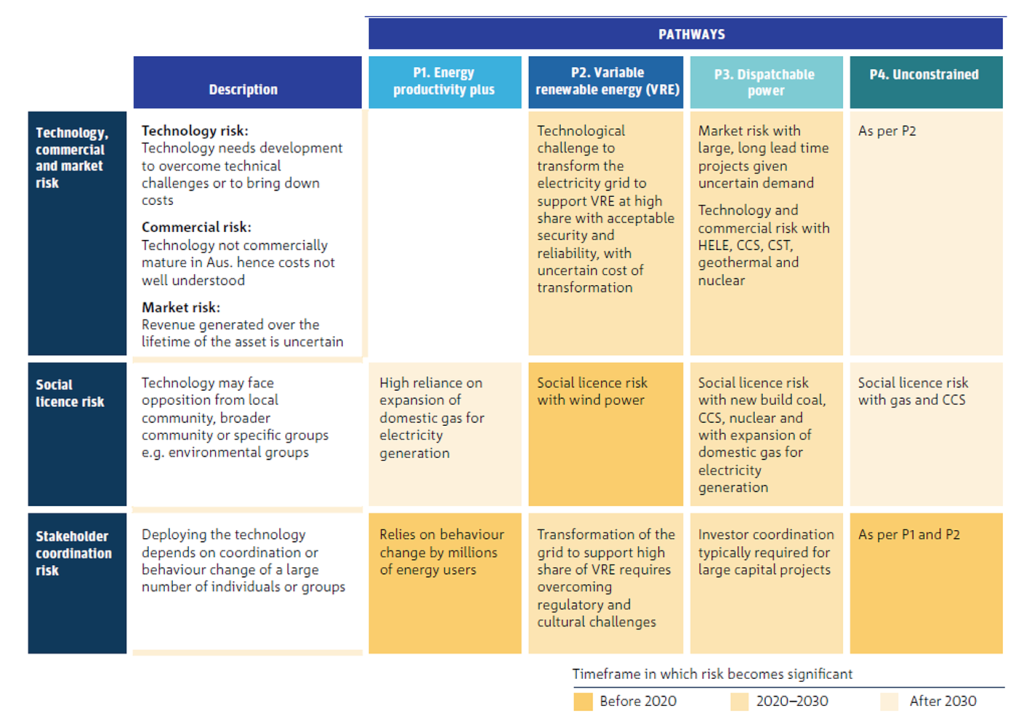 Risks identified with each pathway to cheaper renewable energy.

Energy productivity plus combines mature existing low emissions technology with gas, so there’s no significant market risk. However there is a social license risk, as many will protest a stronger reliance on expanding gas supplies.

Gas-fired generation is high in this scenario. If improved energy productivity reduces emissions elsewhere, the electricity sector will have less pressure to phase out highly polluting generators.

This scenario would also require a high degree of cooperation between government, companies and customers. We would need to coordinate to make sure incentives and programs work together to bring down household and business energy use.

Variable renewable energy invites more technical and commercial risk, as our electricity grid will need to be transformed to accept a high level of energy from fluctuating sources like wind. There’s also considerable community concern around the reliability of variable renewables.

While the evolution towards a secure system with very high variable renewable generation has been modelled in detail for the Roadmap, its final costs will remain uncertain until demonstrated at scale. Whether stakeholders will have the appetite to demonstrate such a system (with some risk to supply security and electricity prices) represents a coordination risk for this pathway.

Dispatchable power is perhaps the most risky option. Solar thermal, geothermal, carbon capture and storage and nuclear power are all relatively new to Australia (although other countries have explored them further). Developing them here will mean taking some technological and commercial gambles.

Carbon capture and storage and nuclear power are also deeply unpopular, and there’s a risk of dividing community consensus even further.

While solar thermal – and potentially nuclear power – could be deployed as small modules, in general the technologies in this category require high up-front capital investment. These projects may need strong government guarantees to achieve financing.

Unconstrained would mean both improving energy productivity and investing in a wide range of generation options: solar, efficient fossil fuels and carbon capture and storage.

Unfortunately there is no objective way of weighing the risks of one pathway against another. However, we can narrow risks over time through research, development and demonstration.

Between now and 2030 we are likely to rely on a narrow set of mature technologies to reduce greenhouse gases: solar photovoltaics, wind, natural gas and storage.

As the world, and Australia’s, greenhouse gas reduction targets ramp up after 2030, we’ll be well positioned to adapt, with the capacity to incorporate a broader range of options.