We collaborated with EMClarity to create radio technology to connect the New York Stock Exchange servers with those of the Nasdaq Exchange in New Jersey in a multi-million dollar order. 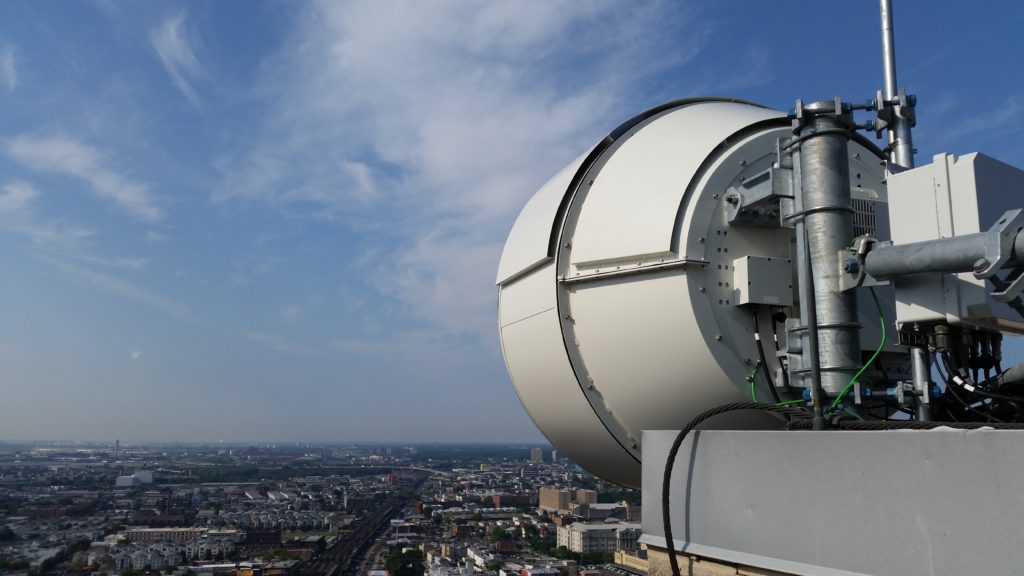 A technological marvel aimed over the New Jersey skyline: “the highest-performing E-band wireless radio in the world (throughput and latency), with the largest auto-steered E-Band antenna in the world”.

To conduct high-frequency trading, financial traders need large amounts of data transferred over long distances instantly, or as close to instantly as possible. Millionths of a second make a difference. Traditionally, this task is carried out by optical fibre networks and low data rate wireless networks. However, information travels through optical fibre about one-third slower than it does through the air. So a fibre-speed wireless (RF) network would provide the ultimate solution.

This was the opportunity identified by Spread Networks in 2012, a US-based low latency network provider. With these requirements in mind, Spread Networks conducted an exhaustive worldwide search for technology that would meet their needs. Their lens fell on Australia and E-band technology being pioneered in our data innovation group, Data61.

E-band is an extremely challenging and cutting-edge radio technology that uses much larger bandwidths than other radio bands to support data rates of several gigabits per second.

E-band, however, is limited by a stunted transmission distance. Though, this shorter range can still be extended by using high-gain antennas – large dishes – at the transmitting end, and at the receiving end. The optimal antennas for long-distance transmission, however, require extremely precise alignment with one another to achieve optimum results.

This is where Brisbane-based radio communications equipment supplier EMClarity and its parent company, EM Solutions, came in. Over many years EMSolutions has developed antenna-steering technology which it now exports to the world. In response to the precision alignment needs of E-band, the group designed an auto-steering gimbal mount. The mount allows both transmission and reception antennas to lock on to each other at long distances, and maintain alignment in a way that optimises the advantages of even very large E-band antennas.

Data61 realised that Spread Networks’ very demanding requirements would be met by combining its technology with EMClarity’s. Plus, EMClarity had the expertise to develop and deliver the entire product to the exacting standards of the international telecommunications market.

The resulting product benchmarks two new technologies in one — the highest-performing E-band wireless radio in the world (throughput and latency), with the largest auto-steered E-Band antenna in the world. The result is a product that eclipses all others in throughput, range and latency.

Delivering the first network of this calibre to the USA is a significant achievement for a small Australian business, and something that would not have been achieved without assistance from excellent partners like Commercialisation Australia (who provided a significant grant for the project), and a high-powered technology group like Data61.

Though negotiations are ongoing to deploy the technology in fast-trading markets in Australia, Japan, China, Great Britain and Europe, the greatest application of the technology is in the general telecoms sector.

The cutting-edge E-band spectrum is the only wireless spectrum capable of supporting multi-gigabit-per-second operations either for backhaul (connections between mobile base stations and the core internet) or for soon-to-arrive 5G mobile communications itself.

Previous post:
Bushfires have a sting in the tail for Tasmania’s honey industry
Coming up next:
Protecting our pollinators through Indigenous knowledge