An insect half a metre long – Dinkum!

An insect half a metre long – Dinkum!

Insects come in all shapes. Some are long and thin, others short and plump. Some have a normal outline, but are no thicker than a piece of paper. Many are cylindrical, many rounded, some hemispherical and some almost spherical.

Then they have all manner of appendages: antennae and jaws or beaks on the head, legs and wings sprouting from the thorax, and sometimes cerci from the end of the abdomen. So if we want to know what the biggest insect is, how do we measure it? By the length of its body? Its wingspan? Its body volume? (that one’s a bit harder to measure). 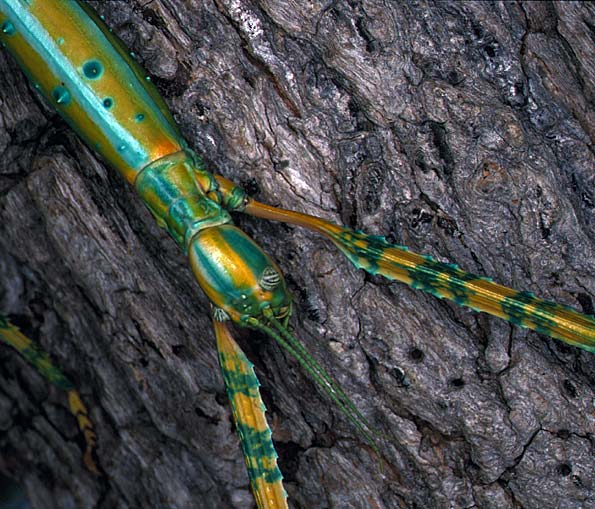 The Gargantuan Stick Insect, Ctenomorpha gargantua, may not be the largest insect in Australia, but it is certainly the longest: females can measure 300mm from nose to tail. Some say that if you include the outstretched legs, a Gargantuan can be 600mm tip to tip. But maybe that’s cheating. The Gargantuan lives in rainforest in north Queensland, and probably spends most of its time high in the canopy, so it’s not often seen.

There are many other species of stick insect in Australia, some almost as long as the Gargantuan and quite common. The Titan Stick Insect, Acrophylla titan, can reach 260mm, and it is not uncommon to see them in small trees in the suburbs of Brisbane and Sydney where, like all stick insects, they chew leaves and flowers. Spur-legged Stick Insects, Didymuria violescens, sometimes build up to plague numbers in the mountains of NSW and Victoria, stripping big areas of eucalyt forest.

Stick insects are easy to keep in captivity and make entertaining pets. Some spectacular Australian species are popular in zoos and butterfly houses all over the world.

Previous post:
How does Southern Surveyor work? If you don’t know, then go for a tour with Rowdy McCullum.
Coming up next:
AMSA-NZMSS Conference Hobart