Alcohol points to something fundamental

Alcohol points to something fundamental 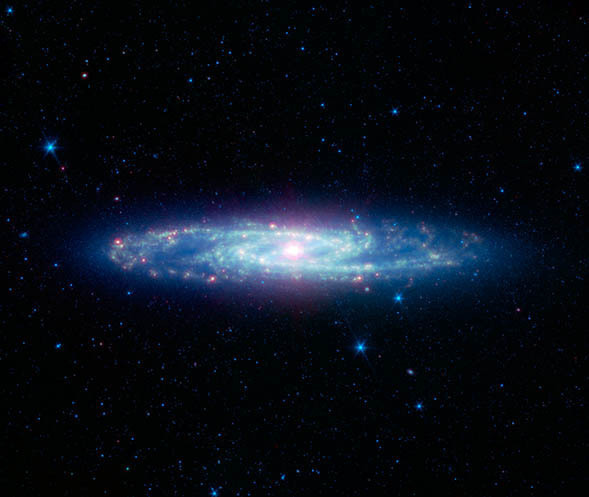 Australian astronomers Simon Ellingsen (University of Tasmania) and our own Shari Breen, and their international collaborators, have discovered the first class I methanol maser outside our own galaxy. Could this type of alcohol be used to test if fundamental constants really are constant?

Ever thought that alcohol had revealed to you some fundamental truth? It seems to have done that for a bunch of astronomers using CSIRO’s Compact Array telescope.

But they were studying the stuff, rather than drinking it. The alcohol was methanol, rather than the less-poisonous ethanol. And to cap it off, the good stuff was not in the fridge but rather less handy, in the Sculptor galaxy (NGC 253) 11.4 million light-years away.

As the Compact Array is a radio telescope, you might guess—and you’d be right—that the astronomers found the methanol because it was glowing in radio waves.

The methanol molecules form what’s called a maser: the natural equivalent of a laser, but emitting radio waves rather than light. Under the right circumstances, the methanol molecules can be ‘fed’ with energy (from radiation, or pressure waves) passing through the gas they’re in, and re-emit this energy in a very concentrated form at a very specific wavelength.

The new methanol maser the astronomers have found is a class I maser, and it’s the very first one found in a galaxy other than our own.

Testing the Universe
So, what’s all that got to do with fundamental truths?

Physics is strewn with fundamental constants—numbers that, for our physical theories to work, we assume remain constant throughout time and space. Some of these numbers, the dimensionless ones, may be more fundamental than others, but we do assume that all of them are unchanging.

But what if they aren’t? Physicist Paul Dirac made that unsettling suggestion back in 1937 (specifically about the gravitational constant, G). Careful laboratory experiments made over many years haven’t found evidence for these numbers changing.

However, they also need to be tested in the Universe. Because light travels at a finite speed, looking out into space is also looking back in time (we see objects as they were when they emitted that light, which can be billions of years ago). So we should, in principle, be able to learn if some of these fundamental numbers have changed over long periods of time.

One of the fundamental numbers is μ (the Greek letter mu), which is the ratio of the mass of the proton to the mass of the electron. This ratio would be different from what it is in the laboratory if, for example, ‘scalar fields’ were responsible for ‘dark energy’.

It turns out that methanol is about 100 times more sensitive to changes in μ than other molecules we can observe readily in space.

The methanol maser emission found in NGC 253 was about ten times intrinsically brighter than the same kind of emission recently found coming from the centre of our own Galaxy. NGC 253 was targeted because it’s a galaxy that is very actively forming stars. If more star formation leads to more methanol maser emission, then we might be able to detect such emission from galaxies that existed and were forming their stars much earlier on in the Universe. In turn, that would give us a good chance to determine if μ has changed over time.

And if μ has changed over time? That would be a very big deal. If you changed the physical constants even slightly, life like us wouldn’t be possible.

Previous post:
Water: we need it to live, and so does our wildlife
Coming up next:
Queensland survey reveals lukewarm view of coal seam gas