A New Hope (for force measurement)

A New Hope (for force measurement)

May the force be with you… but what exactly IS force and how do we detect it? This May the 4th we’re taking a closer look at the phenomenon that is force, and more particularly at an extraordinarily accurate way to measured it – thanks to a recent discovery made by our researchers, working with Griffith University.

This cracking new force detector is not quite as powerful as Emperor Palpatine’s midi-chlorian based model, but it can measure the light force of even the weakest lightsaber, no greater than the gravitational force between a person in Brisbane and another in Canberra.

Get your lightsabers ready, we’re using the force to explore the universe, at the atomic scale.

With the dawn of single-molecule experiments paving the way for new discoveries in drug development and quantum computing, understanding how single molecules interact and change their shape is vital. But detecting the forces at play between individual molecules has always been a difficult phenomenon to measure or predict with accuracy because they are so tiny… until our team, working with Griffith University, pushed against the fundamental boundaries of force detection to solve this puzzle with their single-atom 3D sub-attonewton force sensor. But first…

A brief history of force measurement

If you’ve ever picked up a ‘physics for beginners’ textbook, chances are you’ve heard of “Hooke’s Law.”  Originating with English physicist Robert Hooke, it points the way to all modern measurements of force: by measuring how far a spring is extended, you can work out how much force was exerted. Forces are measured in Newtons. Elon Musk’s recent Falcon 9 Heavy rocket, for example, exerted a thrust of over 26 million Newtons, while at the opposite extreme, today’s best force sensors are capable of detecting force as small as 10-18 N, or one attonewton.

And so back to our recent discovery …

The force on a single atom, measured we did 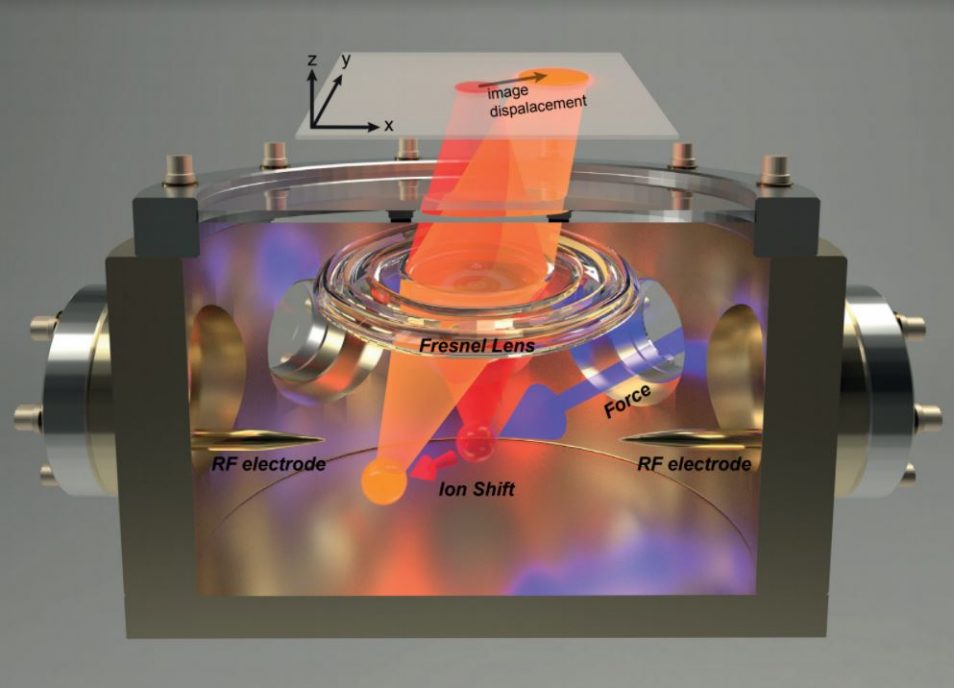 To measure such incredibly weak forces, the team used a single atom trapped inside a vacuum chamber.

The research team was able to measure the force on a lone atom. With the atom trapped in an oscillating electric field, the team measured how far it moved – with one nanometre accuracy – and then inferred the force exerted on it. The forces on the single atom were measured in all three dimensions, and the force? A tiny 95 zeptonewtons. A zeptonewton is 0.000,000,000,000,000,000,001 of a newton. A very small force indeed!

But when the team considered the sensitivity limits of their device, they realised there was one force they couldn’t turn off – and it would compromise all of their measurements, no matter how far they refined the apparatus. It was the force of light.

The force of a light beam

In the movies, the force from a lightsaber can knock a person down, which seems quite fanciful. But light forces, weak as they are, do exist. And in this case, just flashing a microwatt-power laser – barely bright enough to see the atom at all – pushed the atom hard enough to factor into the measurements; even though the force was so tiny.

The team recently published their discovery in Science Advances. They plan to use this same technique in their future research to measure the forces between organic molecules trapped in electric fields.  They can trap objects as large as viruses and cells alongside a single atom force detector like this – making new measurements of the interactions between molecules and living things possible. It’s another step forward into unravelling the microscopic world, one atom at a time.

If you find measuring forces to be a phantom menace…

Previous post:
Supercharging science with the Pawsey Centre
Coming up next:
Paulo de Souza’s science at the pub: Vanishing bees and Mars’ damp, dark past