A little bit of robot love

A little bit of robot love

Perfect Match’s Dexter would have to be up there with the favourites. You know, the 1980s robot that, long before eHarmony and RSVP, used to glide across the TV studio and ‘scientifically’ compute the compatibility of awkward contestants looking for love by responding to suggestive questions about which vegetable is most like them.

If only the contestants had their own robot – let’s say it was called Sense – to consult on life’s big questions, such as ‘Should I humiliate myself on national TV for a chance at a 3-star holiday on the Gold Coast with a complete stranger’, or ‘Do I really need this much hairspray?’, or ‘Is tie-dye going to last the fashion test of time?’ But, I digress.

There was something about Dexter that made him likeable – the intellect, the little blue hat, the computerised voice. He was a smidge sexy. Indeed, robots are a little bit cool. 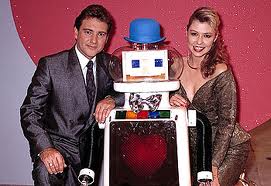 So, you’re probably not surprised that here at CSIRO, where (ahem) cool is the currency, we thought we’d get amongst it. Well, to be honest, we’ve been working in robotics for decades now… but this is particularly clever.

We’re working on a robot for the National Museum of Australia. The idea is that it’ll roam the floors of their Landmarks: People and Places Across Australia Gallery (where Phar Lap’s heart and the prototype Holden are on show) and, using broadband technology, kids in remote and regional areas will be able to link in via the robot to see what’s at the gallery and learn more about the exhibits.

Dr Jonathan Roberts from the CSIRO ICT Centre, who had the idea for the project, probably explains it better…

“The robot will navigate itself around the museum alongside the educator while the remote students will use a special 360-degree field-of-view camera to look around and explore the collection,” Jonathan said.

During the trial, the robot will be accessible by schools and libraries with an NBN connection.

“It’s a pretty nice example of some of the applications that are possible from high-speed broadband technologies,” Jonathan added.

The tele-presence and robotics technology is now being developed by CSIRO, with the first prototype of the robot expected to start ‘walking’ the gallery floors from mid-year. We’ll be sure to show you a sneak peak once it’s made. Students will have access to the system from around October.

And, though they’re too young to remember match-making Dexter, we think the students will find a special place in their hearts for this new piece of robot technology. 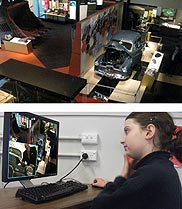 The Museum Robot will help people across Australia access the country’s history.

Previous post:
Fast Fact!
Coming up next:
Insect of the week – Weevil rolls her (or his) own