A field trip to Bardi Jawi country: turtles and fish and seaweed, oh my!

A field trip to Bardi Jawi country: turtles and fish and seaweed, oh my!

Do you miss going on field trips? Our researchers have just finished a 10-day field trip to Bardi Jawi country to better understand food sources for local marine creatures like the rabbitfish and green sea turtles.

Do you miss going on field trips? We have fond memories of those opportunities to escape the grind of the school day, and learn something fascinating about the world around us. Not many people continue to experience the joys of a field trip after they leave school, but for many of our scientists their work takes them all over Australia (and sometimes all over the world).

Just recently our researchers, along with teams from the University of Western Australia, completed a 10-day field trip to Bardi Jawi country in north west, Western Australia – where they took the last of their seagrass, seaweed and microalgae measurements for a West Australian Marine Science Institution (WAMSI) project. The project will determine the current state of the area’s primary food source for rabbitfish and green sea turtles.

The team worked with the Bardi Jawi Rangers on Tallon Island (Jalarn) and Sunday Island (Iwany) off the Dampier Peninsular in the Kimberley, where they measured the growth of seagrass and macroalgae on the reef platforms, and microalgae in the sand that forms the beaches. These are all primary producers that sustain food webs, and the area’s seagrass is a key food source for fish and turtles that are important for the Bardi Jawi. 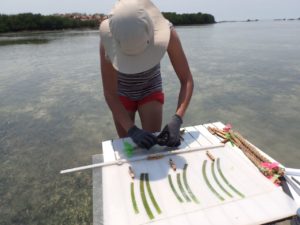 Some seagrass was punched with holes to measure growth — researchers measure how far the holes have moved after a week to see how much the grass has grown. Other seagrass was collected, pegged out, measured and returned to the seagrass meadow for a 24 hour period before being measured again to determine how much had been eaten.

Mat Vanderklift, from our Oceans team (and photographer extraordinaire, responsible for all the these terrific images), said the findings were providing the first comprehensive picture of productivity and seasonality of seaweed, seagrasses and microalgae in the Kimberley. 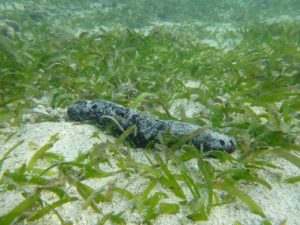 Seagrass habitat with a sea cucumber in the Bardi Jawi IPA.

So what were the findings from all these field trip frivolitiies? The main plants that have been found in the lagoon habitats (the seagrasses Thalassia and Enhalus, and the large brown algae Sargassum) all have high growth rates throughout the year, with growth rates sometimes exceeding a centimetre a day. The team also found that microscopic algae are very abundant in some places, but not everywhere, and bacteria are particularly abundant in the sediment under mangroves and seagrasses.

The project has found that herbivores are abundant in the area and that they eat a lot of the seagrass. One of the main herbivores in the area, rabbitfish (Siganus lineatus), is a highly sought after food source by the Bardi Jawi people.

They also found that the seagrasses are living at the limit of their temperature tolerances and further studies of their vulnerability to climate change are needed.

“Collaborations with the Bardi Jawi Rangers have added enormous value to the research,” Mat said. “We have been able to exchange knowledge and learn from each other – for example, the discovery of the importance of seagrass to rabbitfish would not have happened if we had not worked closely together. The success of this project is because of the collaboration we have built together.”

The latest trip also gave the researchers an opportunity to present to children from the local One Arm Point Remote Community School, where the researchers wowed the high school “Bush Rangers” with real-life chemistry on the beach. Mat also took the opportunity to talk to dozens of excited children about turtles at their Culture Day, including a guessing game where they tried to guess where the tagged turtles had travelled.

The $30 million Kimberley Marine Research Program is funded through major investment supported by $12 million from the Western Australian government’s Kimberley Science and Conservation Strategy co-invested by the WAMSI partners and supported by the Traditional Owners of the Kimberley.

This article originally appeared on WAMSI.org.au.