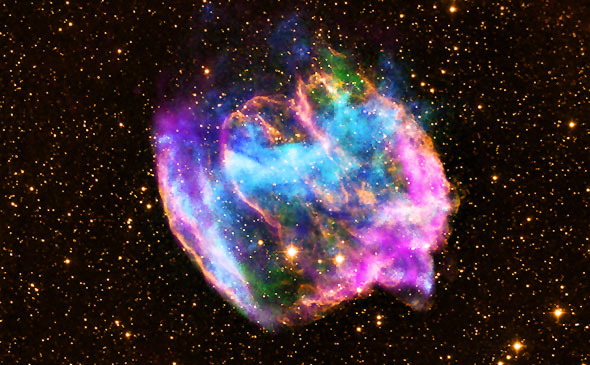 Astronomers studying a supernova remnant located 26,000 light years from Earth, may have found evidence of the youngest black hole formed in the Milky Way galaxy.Combining observations from NASA’s Chandra X-ray space telescope (blue and green), radio astronomy data from the NSF’s Very Large Array (pink), and infrared data from Caltech’s Palomar Observatory (yellow), astronomers were able to learn more about the structure and composition of the supernova remnant called W49B.

Typically, massive stars that collapse into supernovas leave a dense spinning core called a neutron star. Astronomers can often detect these neutron stars through their X-ray or radio pulses, although sometimes an X-ray source is seen without pulsations. A careful search of the Chandra data revealed no evidence for a neutron star, implying an even more exotic object might have formed in the explosion – a black hole.

While the light from W49B has taken 26,000 years to reach observers on Earth, the combined image is showing the aftermath of the celestial fireworks as it was only 1,000 years after its birth. A baby compared to the age of the universe.

Previous post:
Is it the space shuttle taking off? No, it’s our fabulous gondola!
Coming up next:
In south-western Australia, water shortages will worsen