In the past few months there seems have been a rush of reports on sightings of alien creatures on the planet Mars and in deep space. The latest of these to raise their ‘heads’ have been the deep space version of the Loch Ness monster and (wait for it) a squirrel on Mars. 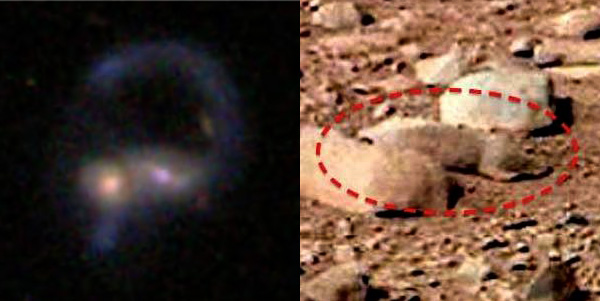 Really? OK, well the first one is a bit of fun. ‘Nessie’ is a product of the collision of two galaxies. Stars and gas have been stripped away to produce two beautiful extended tails – a long neck and flipper – and the remaining bright star-filled regions of the two galaxies creating the body.

No one is actually saying that it’s the celestial cousin of the Loch Ness monster. It’s just a marvellous celestial event that like a lot of galaxies and nebulae, get their names from the things they just ‘happen’ to look a bit like. Think of objects like the Tarantula or Eagle nebulas.

The squirrel on the other hand is a completely different matter and raises a troubling trend in the public awareness and media coverage of Mars’ exploration. 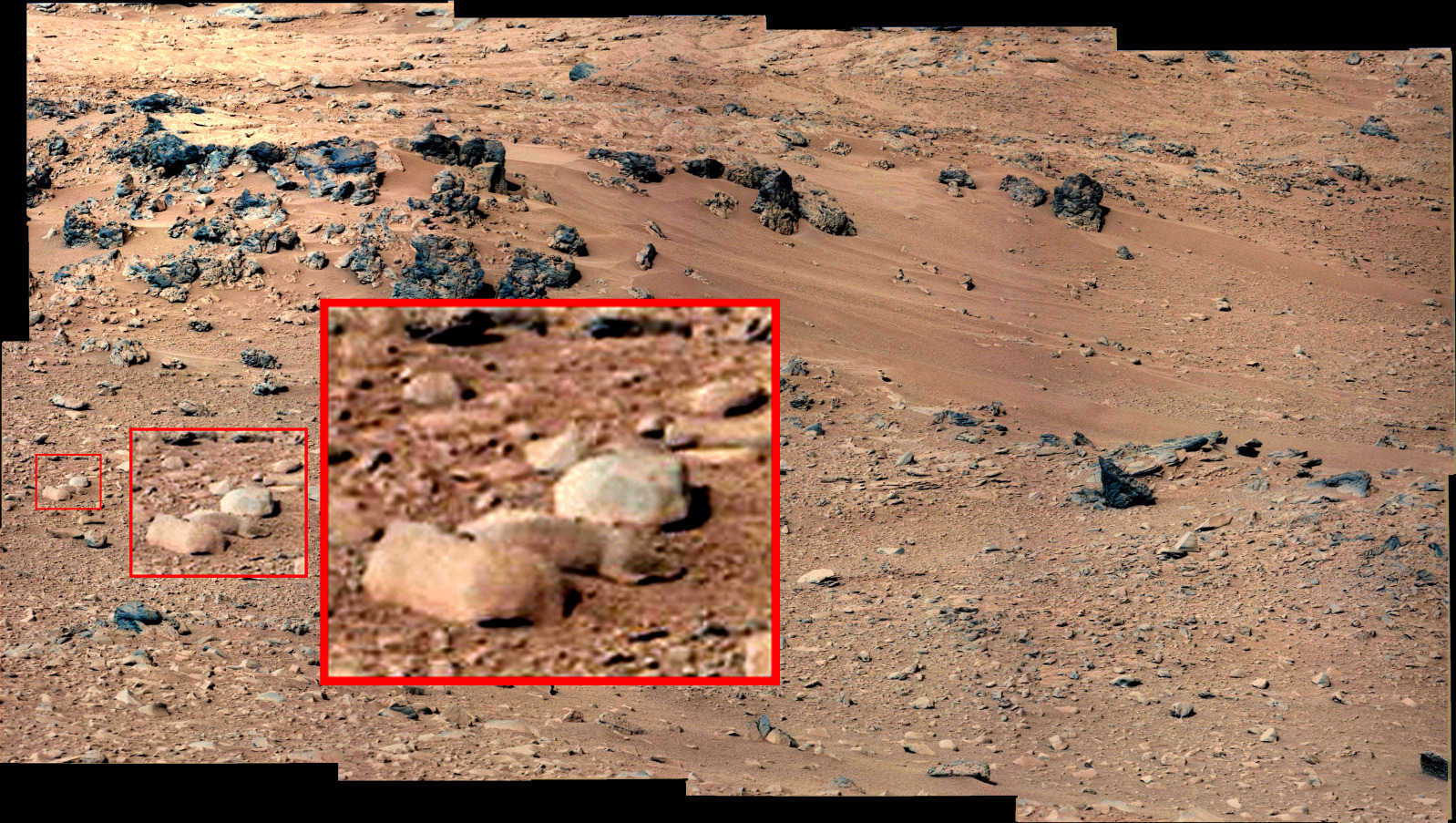 Did NASA’s Mars Rover Curiosity really find a squirrel or is it just a rock? Image: NASA/MSSS

It seems that we’ve been ‘seeing’ evidence aliens, skulls, faces, trees and a zoo-full of creatures on the red planet since, well, from even before we had spacecraft actually going there. Stories of Martians starting a ‘war of the worlds’ and Percival Lowell’s ‘canals’ have become a part of popular culture, sparking the idea that Mars was a planet that once had a thriving civilisation.

Spacecraft that have gone to Mars have revealed a planet that once had water flowing across its surface, with scientists debating the possibilities of past or even present life.

All of these things have cemented the idea in the public’s imagination that there must be someone or something there. So it’s inevitable that people have gone looking for it. 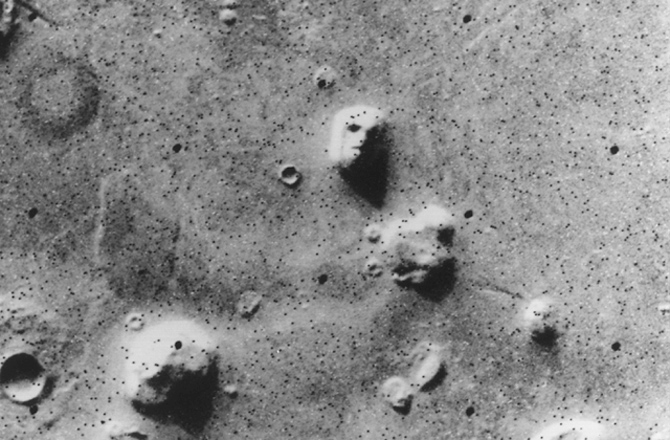 In the late 1970s and early 80s, it was the now totally debunked ‘Face on Mars’ that really got everyone thinking that there must have been some form of advanced civilisation building pyramids and human-like faces staring skywards on that distant world. Some people made a lot of money out of this idea, perpetuating the myth even after high resolution images revealed the ‘face’ was nothing more than a craggy mesa-like formation.

Of course, that ‘face’ wasn’t the only one. What about the Martian winking smiley face? The alien civilisation hunters completely missed that one. 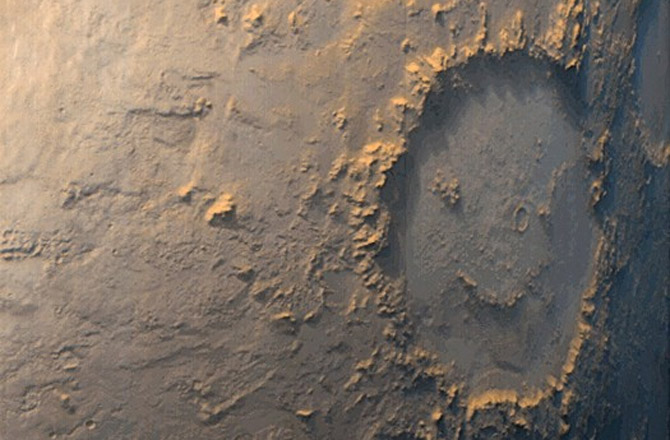 All sorts of natural features can look like a face, including this large Martian crater. Image: NASA

Undeterred by the setback with the ‘face’, the alien life hunters have continued their search and every now and then they ‘find’ another bit of proof that sadly tends to get more attention by the media and public than some of the actual scientific discoveries taking place.

A few years ago there was worldwide media coverage of the sighting of a gorilla and later Big Foot on Mars. The coverage wasn’t just a quirky side column story either, it was front page in some newspapers and television media actually reported it in their nightly news bulletins. 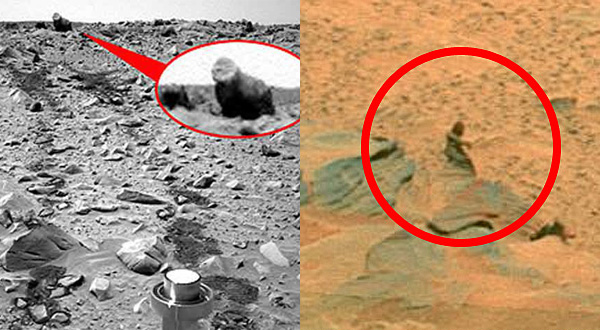 Rocks can appear to be just about anything when you let your imagination do the ‘seeing’. Even gorillas and Big Foot appear! Images: NASA

Fortunately, calmer minds have gone to the effort to disprove such claims.

Sadly though, there’s continues to be a stream of strange reports, like those of sand and stone carvings of a giant parrot on the red planet! 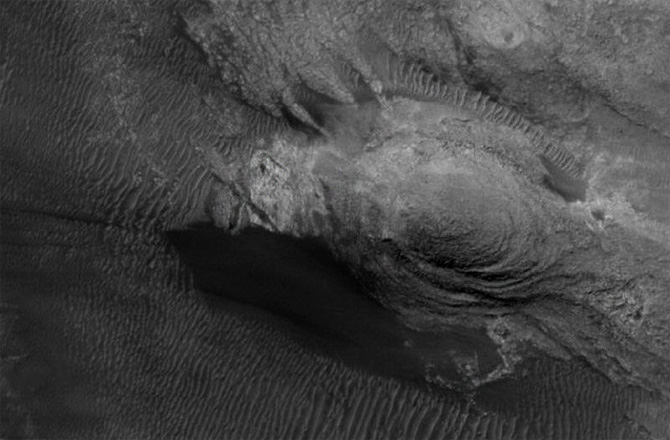 Of course, all the parrots and squirrels would need trees to sit in wouldn’t they? No problem, they’ve found those too! 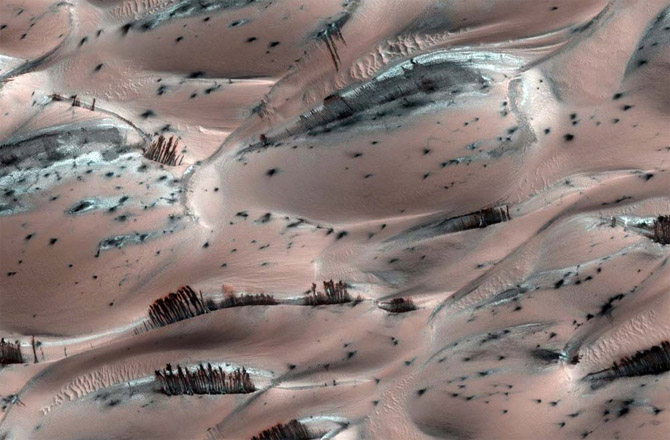 So, is there really life flourishing on Mars, is it safe haven for monsters and aliens and Martian artists, or is there a simpler explanation.

Humans have a built-in ability to try and make sense out of something that at first glance are just random shapes. We try to find familiarity in the unfamiliar. How many clouds have you looked at that suddenly look like VWs, fish, sheep, spaceships or “no dad, that one looks like you!”

A perfect example is the human face. We are born with the ability to seek out something that we have never seen before, the form of two rounded features combined with a few lines. Babies seek out and fixate on their mother’s face almost as soon as they open their eyes.

We ‘see’ faces everywhere. In shadows on the ground, in clouds, in a hand drawn smiley face. Remember that a smiley face is just two dots and a line, but our brains tell us that it’s a face. We connect to it at a very instinctual and even emotional level. Recognise these  🙂  🙂  🙁

A wonderful example of pareidolia was illustrated by Eric Hartwell, a keen follower of NASA’s twin Mars Rovers, Spirit and Opportunity. Shortly after ‘Big Foot’ had been spotted, Eric did a little alien hunting of his own and managed to find most of a zoo, plus a few other surprises hanging around in the same picture. 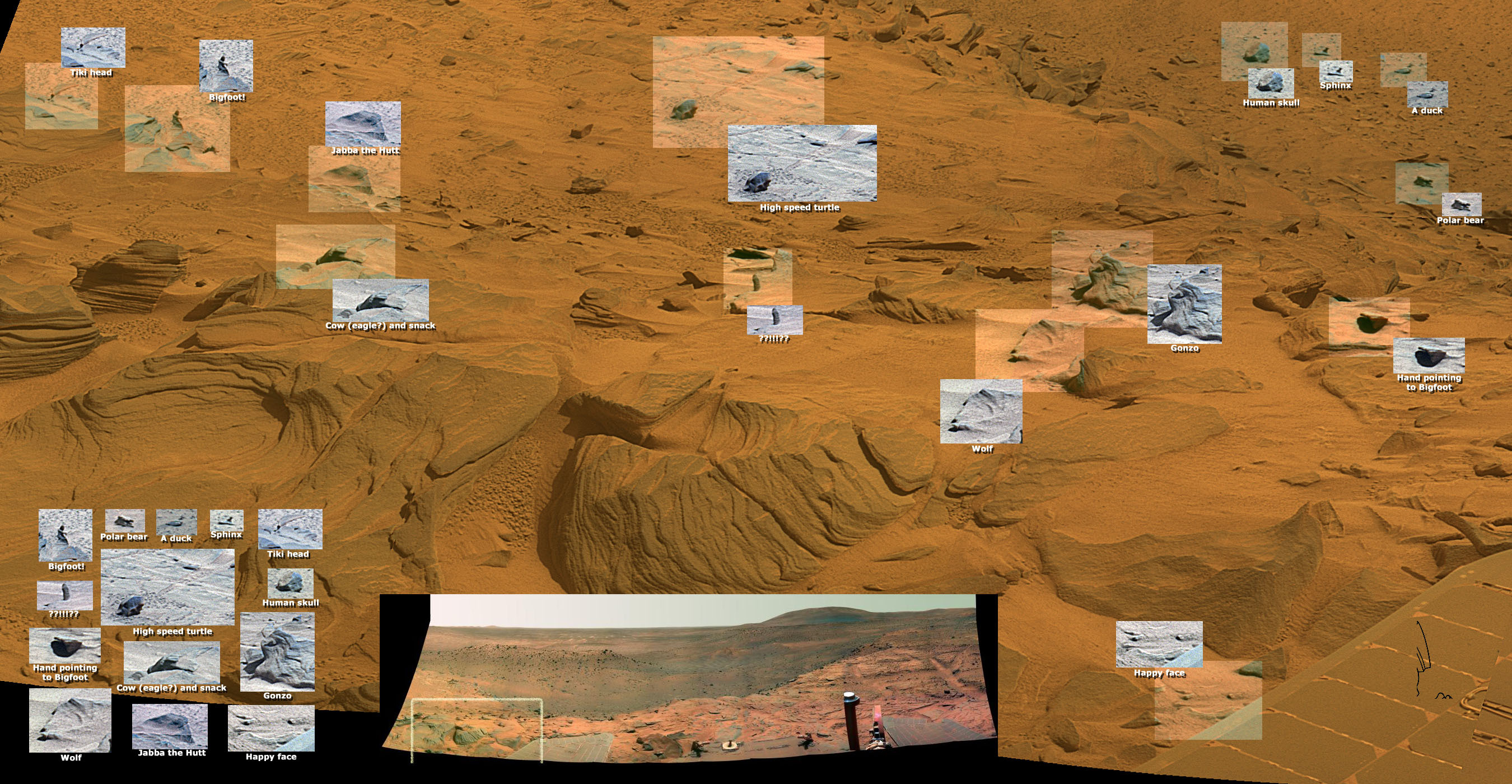 Big Foot and Friends. Just about everywhere you look on Mars there seems to be something that looks like an animal or other more earthly creature feature. Image: NASA/Eric Hartwell

Turns out that Big Foot was just a few centimetres tall and was sharing the limelight with a polar bear, a duck, a wolf, an eagle, a turtle, an alien skull, Gonzo the Great, plus a bunch of things, including, guess what, another smiley face!

The internet is littered with websites and videos that go into great detail about groups of tiny Martians going about their daily business or that rats roam the dune fields and that the surface is covered with human and alien skulls.

Will the alien hunters ever be convinced that what they are finding is all just in their heads? Probably not. 🙁

So next time you hear news of monsters, dead aliens and squirrels in space, you can safely say ‘It’s not nuts afterall’ (except those the squirrel eats). It’s just pareidolia and a healthy human imagination. 🙂

Previous post:
Take a bite at the Bight – and its deep ocean ecosystem
Coming up next:
Would you like to SUPER SIZE that bug?