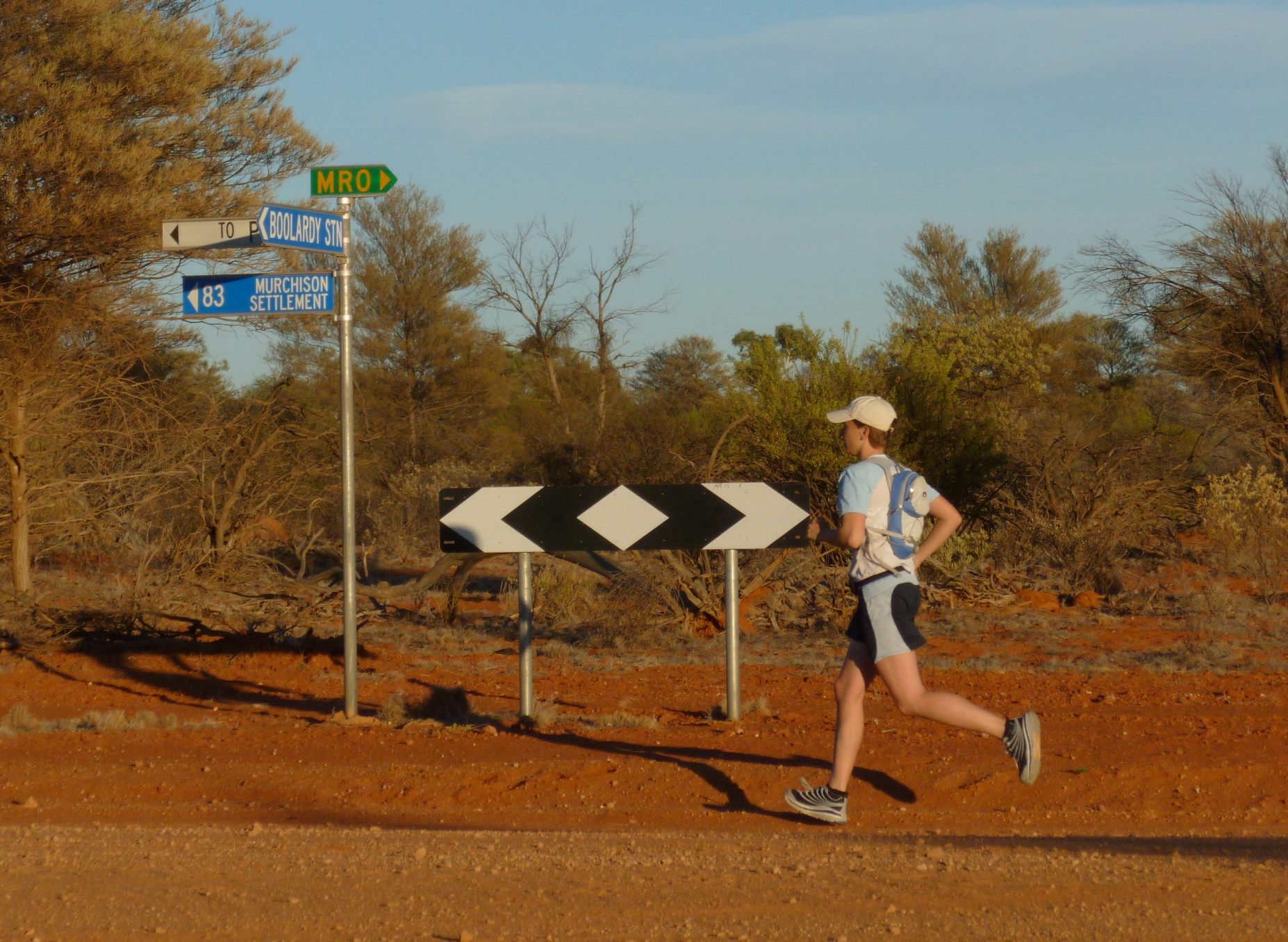 Lisa takes a pre-breakfast training run at the Murchison Radio-astronomy Observatory – home to our ASKAP telescope and central site for components of SKA infrastructure in Australia.

Last year, as a culmination of that effort the SKA Organisation announced that both Australia–New Zealand and Southern Africa would host this next-generation telescope. Happily, we now share a common aim: to support the international community in building the best radio telescope the world has ever seen.

In celebration of this fact and acknowledging the mammoth efforts made by all parties in getting this far, I decided that a gesture of friendship was in order.

Wanted: @SKA_Africa member(s) to join me in Comrades Ultramarathon 2013. Let's bring the SKA community together!

Possessing iconic status in South Africa, the race attracts over 18,000 entrants each year and is billed as the world’s greatest ultra-marathon. The event is steeped in tradition and the organisers implement qualifying standards and very strict cut-offs at various points on the course, including a 12-hour cutoff at the finish line.

I’d had my eye on the event for some time and June 2013 (an ‘up’ year) seemed like the perfect opportunity to have a go.

I was delighted to see my challenge accepted by Daan Du Toit, representative of South African Department of Science and Technology to the European Union, based in Brussels. I’d never met Daan but despite this, on 30 May 2012 we made a joint commitment to our common goal.

In spite of our hectic lives and work schedules we kept closely in touch through our hard year of training and both made the start line in Durban on 2 June 2013. For Daan, it was a triumphant return home after a long absence from the Comrades marathon. For me, a maiden voyage on the choppy seas of this beautiful race. 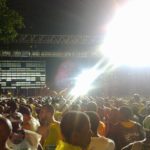 You can feel the excitement building at the start line. 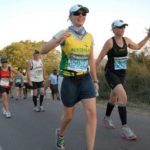 On the up-hill slog during the Comrades race. 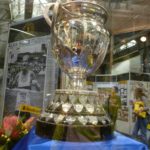 Lisa takes a sneaky selfie with the Comrades trophy.

The trip to Durban and the race were all-encompassing experiences. Sharing the road with over 16,000 starters generated a huge feeling of camaraderie, especially as we were enjoying what nine-times Comrades winner Bruce Fordyce described as ‘the most challenging conditions that he has ever seen’. With temperatures into the 30s (Celcius, that is) and a hot wind buffering runners on the high plains, many struggled and fell by the wayside.

For all, a learning experience about humility and controlling your pride. Ultimately, Comrades is not about yourself, or your individual attributes. It is about the runners that sacrifice every weekend for months to cross this route, it’s about passing your fellow runners a much-needed drink, giving children a high-five or a helping hand through the Comrades charities, not to mention encouraging the Comrade who is mentally lost and sobbing by the wayside near the top of one of the race’s five formidable hills. In this race, life’s journey overtakes each of our own.

For my part, having lived and breathed this race I am glad to claimed my first Comrades medal. I now have a love affair with the Comrades marathon, with Africa and I will be back for more. 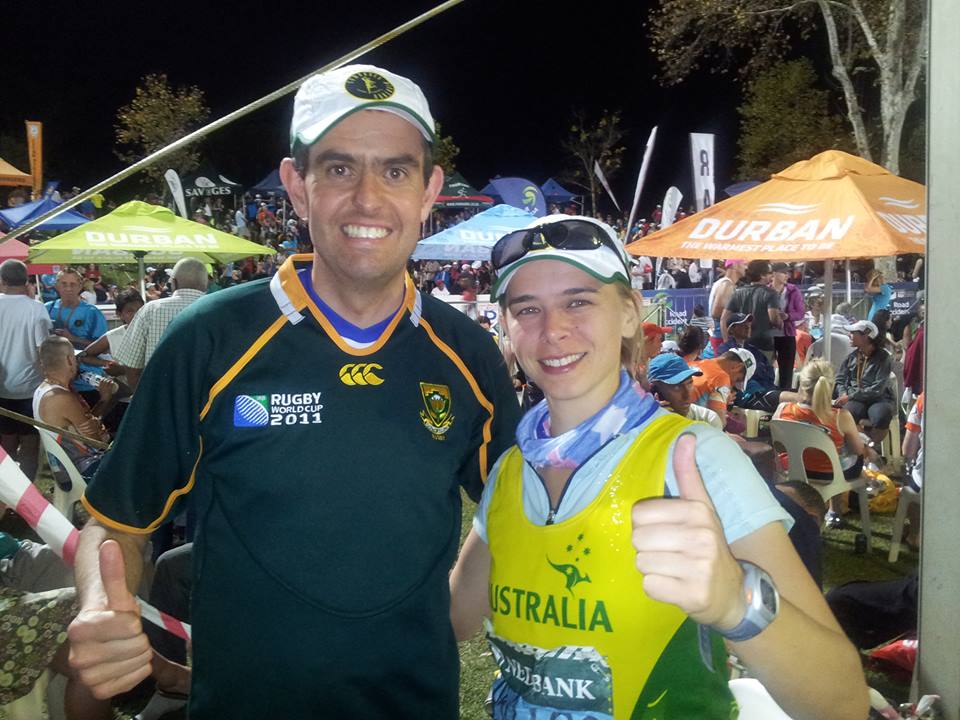 After the race, Daan Du Toit had this to say:

I am happy to report that our SKA Comrades friendship run achieved its objective.

Attached is a picture of Lisa and me at the finish – she has been overwhelmed by the Comrades experience and is determined to return. It has been more than 10 years since I had been at the Comrades Marathon, and I found the event as amazing as ever (but the hills are more monstrous than before). Truly an iconic South African event with all the clichés about South Africans of all walks of life uniting in a common, even if slightly idiotic, enterprise, as true as ever.

[W]e plodded on towards our destiny, cheered on by the crowds as if were champions, playing our part in the day’s proceedings. And despite the aching legs screaming because of the abuse they are subjected to, the KwaZulu-Natal sun burning down at more than 30 degrees and the “revolting” taste of energy gels sticking to one’s palate, it was very good to be alive and proudly South African.

Bless the Comrades Marathon and may we all grow from the experience. Can you think of a single reason why you shouldn’t join us for the ‘down’ run?

See you next year!

Lisa Harvey-Smith is CSIRO’s ASKAP Project Scientist, and finished the Comrades race in an incredible 11h 54m. For those inspired by Lisa’s story, entries for next year’s race open on 1 September 2013.

Previous post:
Fault lines lead to gold
Coming up next:
Our fascination with northern Australia