This year is going to be a big one for our Canberra Deep Space Communication Complex (CDSCC). Not only are we celebrating the 50th anniversary of the NASA Deep Space Network (DSN) – a global network of spacecraft tracking facilities that CDSCC is a part of – but this Wednesday, 19 March, also marks the start of the 50th year of operation for our CDSCC facility in Tidbinbilla, ACT. 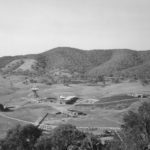 Then… The CDSCC site during construction in 1965. 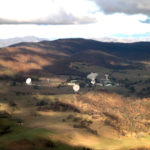 …and now. From almost the same point of view, the antennas of CDSCC.

More on the celebrations later this week, but for now, here’s a few Tid-bits about CDSCC and its role in the global DSN. Portrait of Our Solar System – These six images of Venus, Earth, Jupiter, Saturn, Uranus and Neptune make up the first ever ‘portrait’ of the solar system taken by NASA’s Voyager 1 in 1990. The image of Earth prompted Voyager team member Carl Sagan to describe our home planet as a ‘pale blue dot’ and ‘a mote of dust suspended in a sunbeam.’
Image credit: NASA/JPL-Caltech.

Several times a week the DSN antennas also capture signals from the two Voyager spacecraft, which are exploring the edge of interstellar space. The signals received from these spacecraft have the power about 20 billion times weaker than that of a digital wristwatch (our dishes are pretty sensitive).

Australia has played a key role in every deep space mission NASA has ever run, but when they are not tracking spacecraft, Australian scientists can also use the antennas for their own science projects – often in cooperation with our other radio telescopes such as Parkes and the ATCA, using a technique known as Very Long Baseline Interferometry (VLBI).

As part of a larger network, the DSN also receives data from space telescopes that hunt for planets around other stars and makes observations of asteroids. Naturally occurring radio sources such as pulsars and quasars can also be used for geodetic measurements, which reveal changes in the crust of Earth by tracking how long it takes a radio signal from a quasar or other astronomical source to reach different telescopes.

Tune in on Wednesday to find out more about the CDSCC and our role in the Deep Space Network.