Personally, I didn’t get to see the ‘Red Moon Rising’ yesterday evening – rain and thick cloud cover scuppered any chance I might have had of seeing this impressive lunar eclipse.

John Sarkissian, an astronomer at our Parkes Observatory braved the elements though and with his trusty camera in hand provided us with the illustrative shot below.

Conditions at Parkes weren’t absolutely ideal. John had initially tried to get a shot of the rising, eclipsed Moon looming directly over the telescope.

Unfortunately it wasn’t meant to be as a bank of cloud remained low on the Eastern horizon obscuring the Moon as it rose. It wasn’t until around twenty minutes later that the Moon finally peeked out from behind the low cloud. It was well within the umbra with a rosy hue but by then it was well above the horizon. He had missed his perfect photo opportunity but still managed to take the great shot  of the ‘Red Moon’ and ‘The Dish’ as seen below.

Thanks for sharing John! 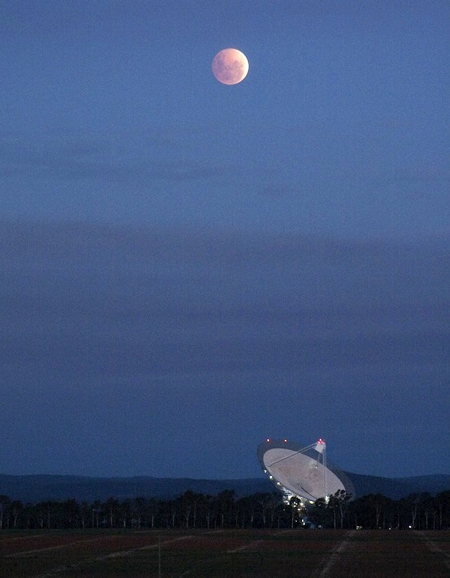 Previous post:
Let’s go!
Coming up next:
Testing the CTD system onboard Investigator