Testing technology on the Galactic Centre

Testing technology on the Galactic Centre

This is an image of what the region around the centre of our galaxy looks like in radiowaves: 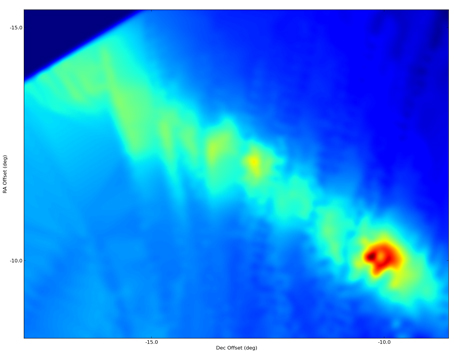 The centre of the Milky Way, in radiowaves.

Imaged at 1300Mhz, the image shows a bright source in red – Sagittarius A*, the supermassive black hole in the centre of our galaxy – and in green and yellow the dusty plane of the Milky Way, where the majority of the stars, gas and planets lie.

It’s only a low resolution image, taken using a single 12-metre antenna at the Parkes Testbed Facility, near Parkes in New South Wales. Nevertheless, it’s a good match to previous observations of the same area of our galaxy, showing the same bright objects at the same positions.

An instrument with a large, green chequerboard circle sits in the focual point of an antenna, set against a blue sky.

The PAF at the Parkes Testbed Facility.

The Parkes Testbed Facility is used to test the technology that will be used on the ASKAP radio telescope in outback Western Australia. For this image, I was lucky enough to use one of the first ASKAP phased array feeds (PAFs, pictured left), which sit in the focal point of the parabolic  dish.

The full ASKAP array will have 36 dishes, and if this is the sort of image we have made with just one PAF, imagine the sorts of things we’ll be able to see with 36.

As comissioning ramps up for early science with ASKAP, the image above is an enormously encouraging result, and a strong preliminary validation of the hardware’s capability as a survey science instrument. Not only do these results accurately reproduce known observations, but they have been obtained at a much improved speed: while covering a large area of around 20×15 degrees on the sky, the image above was produced in less than an hour and a half.

It has been achieved as part of our ongoing effort to implement early multibeam observations: the basis of ASKAP’s revolutionary design is PAFs, which allow the telescope to gather data with many beams, covering a spread of points across the sky. This is a flexible process, and allows a large amount of data to be gathered in the same amount of time as it would once have taken to look at a single star.

This is an enormous advantage for much upcoming radio astronomy. For example, with fast and efficient survey instruments, we can study large-scale structures in the universe, magnetic phenomena, transient radio sources, and much more. To highlight the example that’s most relevant to this work, by mapping continuum HI (hydrogen) emission, it’s possible to probe how galaxies form, and map large scale structure for cosmological studies. The overarching aim of this project is to explore how well ASKAP’s instruments can actually do survey science of this type.

To do so, we have investigated the best way to arrange the beams of a phased array, and, by combining the 12m with the Parkes 64m dish as an interferometer, encoded the beam arrangement to hardware. Having identified a hexagonal arrangement of seven beams as an optimal pattern for the available system, we’ve developed code to evenly grid these patterns over the spherical sky.

Two antennas at Parkes, one much smaller than the other, is located in open grasslands and a blue, cloudy sky.

In the foreground is a 12m antenna, a testbed facility for ASKAP, while in the background is the iconic 64m Parkes antenna. Credit: Ettore Carretti

This has allowed us to take test observations of a number of interesting regions – the above is the largest to date. From observational data, code developed during this research can be used to create a map of the survey region, showing the strength of radio emission at each point.

Work remains to be done in calibration – while we have made steps in removing gain variations due to physical temperature fluctuations in the signal chain hardware, and other sources of noise, this is ongoing an ongoing process. Once complete, though, these routines will enable even better images to be produced in the future. Next, we plan to conduct larger and deeper surveys of the galactic plane, enabling us to detect even more radio structure.

A headshot of Sarah Hegarty as she smiles.
Show descriptionHide description
Sarah Hegarty is a student at the University of Queensland, Brisbane; after completing a summer vacation scholarship with CSIRO, she has continued her research as part of her honours thesis.

Previous post:
Share your health tips and win
Coming up next:
Our role protecting Aussies from the scary stuff