One of the many differences between millimetre wavelength radio-astronomers and everyone else is their attitude towards water molecules. While most of us might think of water as a precious, life-giving substance, they think of them as pesky, interfering little molecules.

And perhaps with due cause: water molecules in the atmosphere refract millimetre radio waves, distorting the images and measurements the astronomers are taking using ground-based telescopes. A telescope that observes objects in space using several antennas will therefore see the location and intensity of a radio emission fluctuate over time, as pockets of air with varying water vapour concentration moves through the telescope’s field of view. It’s doubly infuriating as this affects each antenna differently: they are spaced far enough apart that each antenna has a different pocket of water vapour to look through.

This effect is very similar to the scintillation – or twinkling – that you can observe when looking at stars. The light from the stars (at visible wavelengths, not radio wavelengths) is being refracted by temperature gradients in the atmosphere.

The Australia Telescope Compact Array (ATCA) in Narrabri, New South Wales, is one such telescope that can be affected by atmospheric water: it has an array of six identical 22-metre diameter antennas, and five of the antennas are moved along a 3 km-long railway track. This changes the resolution and sensitivity of the astronomical object that can be obtained. Astronomers use the ATCA to study the early universe, cold hydrogen gas clouds, galaxy and star formation. (Musicians use it for other things.)

Watch the six antennas at the ATCA be reconfigured:

To overcome the water vapour problem, Balthasar Indermuehle and his colleagues developed water vapour radiometers for ATCA. These are devices that can determine the amount of water vapour in the field of view of each antenna, and thus can derive the changes in the length of the path the signal has travelled to each of the antennas by measuring very faint temperature fluctuations.

This is not the temperature variation of the air, but of the molecular emission line. It’s called the “brightness temperature” – it is the amount of radiation given off by the water molecules.

“[Water] molecules have a specific frequency around 22.3 GHz where they emit a lot of radiation. This radiation can be measured with a radiometer such as our WVRs [water vapour radiometers] and converted from a voltage to a temperature reading, so that we can do useful things with it, such as estimate the amount of water vapour in a given pocket of air,” says Balt.

The water vapour radiometers recently became available to observers at the ATCA. 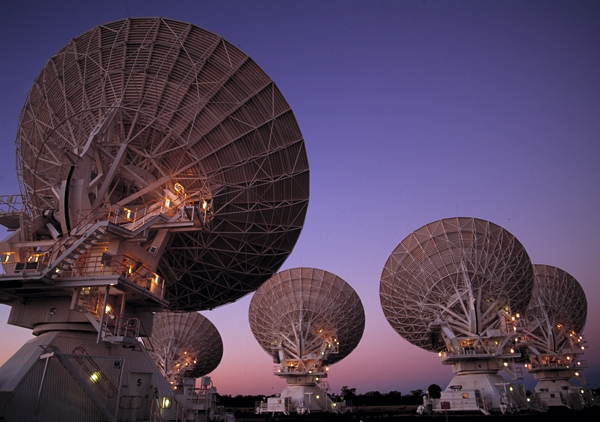 As a result, Balt says, the resolution of the ATCA can be increased by up to a factor of 10 as the maximum distance between antennas at higher frequencies can be increased; there also are longer periods between calibrations (meaning the efficiency of the telescope is better); and there are a lot more weather conditions that now can result in successful observations.

To find out more about the method and technology used to account for the water vapour, you can read their paper through Arxiv.

The Australia Telescope Compact Array is having an Open Day on September 1, 2013. You’re welcome to come along and find out more about our telescopes!