Our ‘stealthy robot’, seen here observing a target through grass, will be able to discover much about natural wildlife.

The ability to track wildlife in natural environments while remaining undetected poses many technological challenges. The goal of CSIRO’s “robotic stealthy tracking” project, however, is to directly address these challenges. Observing an animal’s behaviour in the wild can be a daunting task for researchers. They may have to wait hours, days or even months to record a new or unusual activity.

Something as simple as the observer’s sound, scent or sight may also influence the animal’s natural behaviour and in turn invalidate the information gained from the research. But when it all works out, the footage and knowledge gained can be highly rewarding.

By developing the technology to allow our robot to contend with the issues of maintaining constant observation of a target, we needed the robot to be able to move silently and purposefully when tracking a natural target without being detected.

Robotic stealth can be referred to in “visual” and “acoustic” stealth terms. Typically, stealthy robot navigation research has focused on hiding the robot from a target’s line-of-sight only. We have inverted this problem and developed a system that reduces a robot’s visual conspicuousness and allows it to hide in plain sight so it can achieve constant observation.

Visual stealth deals with the appearance of the robot – its colour and its movement strategy. Camouflage can contend with breaking up and disguising the robot against its background, but movement requires a more reactive strategy in response to the target’s position, its behaviour, and direction of gaze.

While gaze direction is difficult to determine, the position and trajectory of the target can be determined using the robot’s on-board sensors.

To address the challenge of constant observation while “hiding”, the premise is that remaining stationary in front of similarly coloured objects or areas in the environment effectively reduces the visual conspicuousness of the robot.

Once located at an observation point, the robot monitors the target and evaluates the environment for better vantage locations. 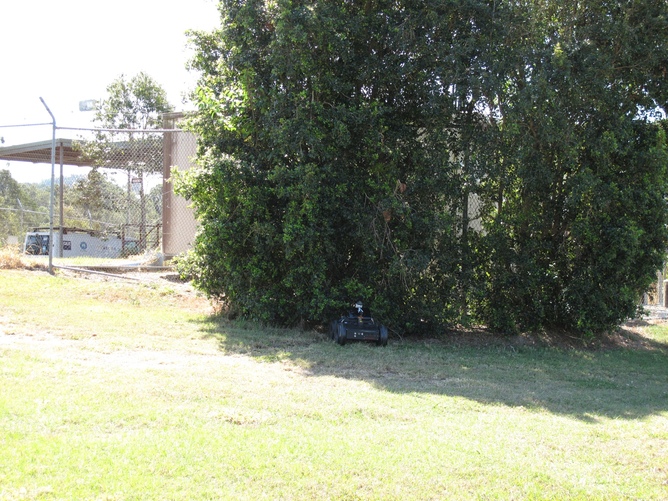 The robot hides in shadows to avoid being detected.

For a robot to be acoustically stealthy, it needs to consider its “ego-noise” – that is, noise arising from motors, wheels and ground contact, not just from the robot’s own perspective, but as it would be perceived at the target’s location.

Other factors for determining the perceived noise, include the density and type of nearby objects, distance of the target, and acuity of the target. Our system uses a conservative offline model for the type of environment the robot will be operating in, to estimate the robot’s noise at the target.

A second consideration is the level of background noise. This may come from periodic bird noises, insects, wind, water flow or other natural noises. We have found it’s possible to observe the soundscape while the robot is
stationary at a vantage location or moving between locations; to accurately estimate the robot’s own noise in real-time over different types of terrain; and predict what a target would hear while the robot is moving.

Currently, we have demonstrated the major components of the system in outdoor built environments using a small four-wheel drive robot as the first step towards application in natural scenarios. The robot is able to track a target by selecting key vantage locations which provide cover, even detecting and utilising shadows to aid camouflage.

Additionally, our robot is capable of dynamically estimating its own sound levels at the target as it moves around. By monitoring the local soundscape, the robot can move to a better vantage location while remaining acoustically masked.

The next challenges are to evaluate the technology on different platforms that allow increased mobility in bushy and rocky terrains, and to take into account some of the known natural behaviours of various animals into the vantage point evaluation. 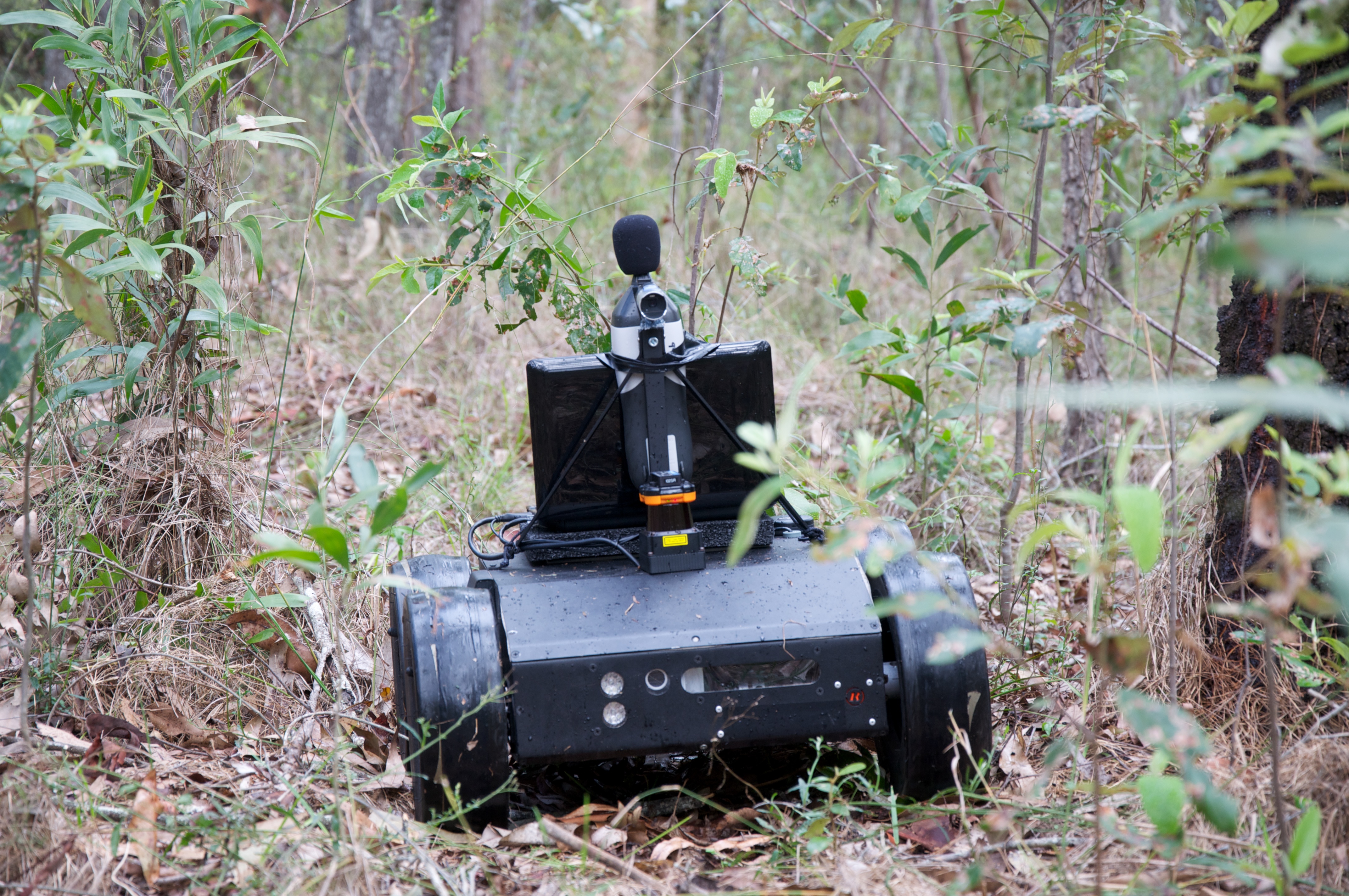 Uses in environment and nature

Intelligent robots have great potential for natural wildlife and environmental researchers, who could use this technology to assist in their information gathering and discover habits and patterns about wildlife we never knew existed.

Robots could be placed or called into areas where animal activity is expected or detected by some other means such as sensor networks or human sightings. These robots could be made to blend into the environment, to record video and audio data from the scene and even track an animal as it wanders about.

In the near future, we would hope that biologists, environmental scientists and maybe even documentary makers will be able to go into the field armed with a collection of robots that they release into the wild to record new and exciting footage of animals in their natural habitat.

Previous post:
Count Your Lucky Stars
Coming up next:
Is it the space shuttle taking off? No, it’s our fabulous gondola!

END_OF_DOCUMENT_TOKEN_TO_BE_REPLACED 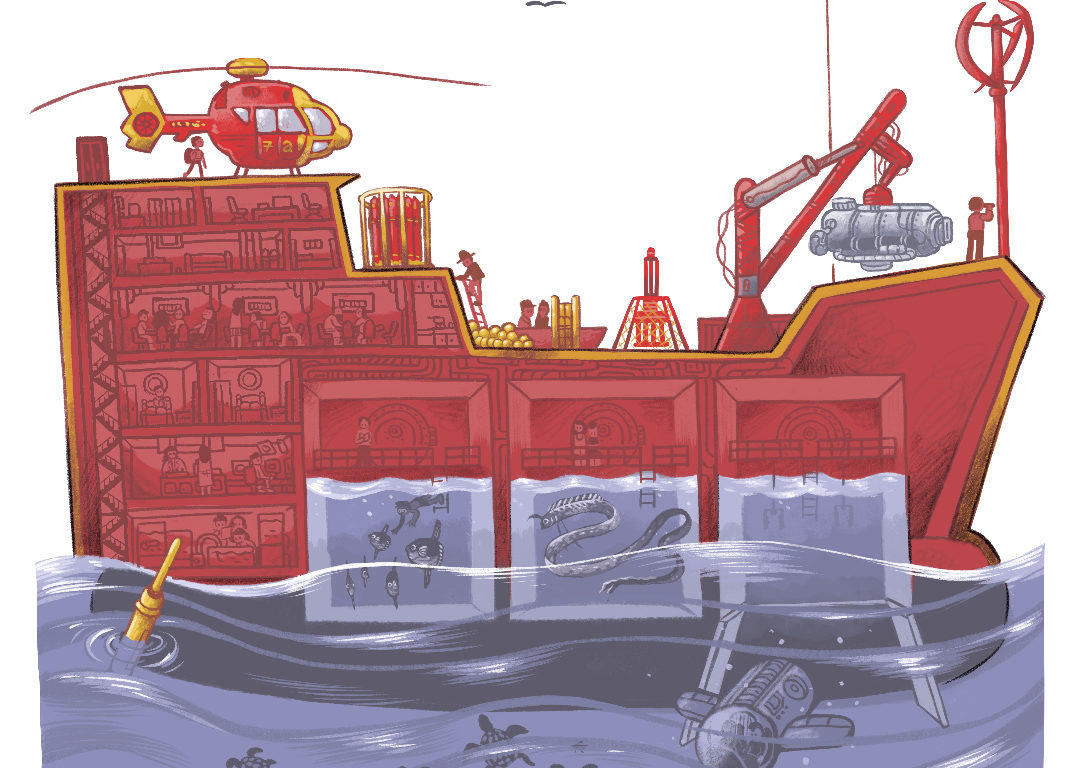