After her career as an X-ray astronomer then project manager, Dr Sarah Pearce joined us and set her talents to collaboration, not just leading global relations with telescope and satellite technology but also in her secondment as Director of Strategy for the newly formed Australian Space Agency. 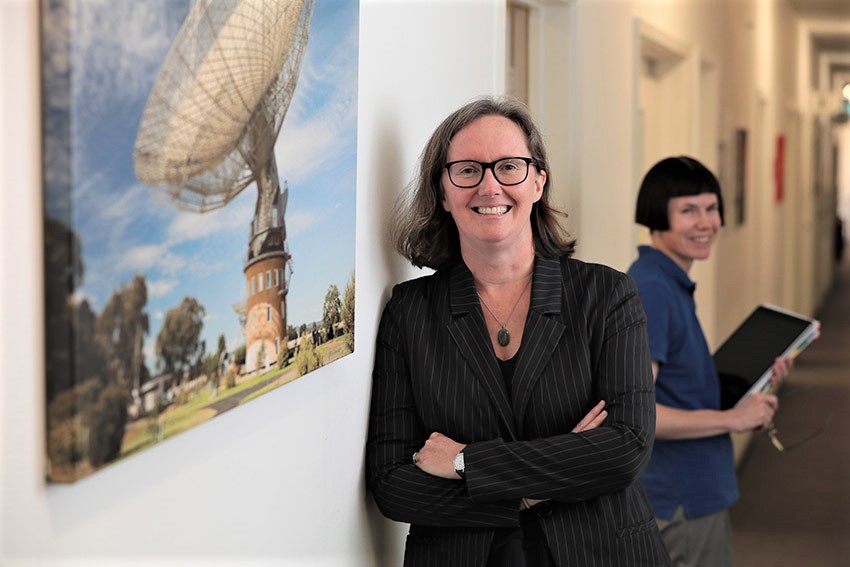 As Australia’s national science agency, we have a long and accomplished history in supporting and developing the space sector. Now, with Australia starting its journey to build a national space agency, we’d like to introduce you to some of our experts in the sector. For Dr Sarah Pearce, collaboration is second nature.

Having worked on some of the world’s largest research infrastructure projects, Sarah Pearce’s attention is now focused on growing Australia’s future in space. It’s been a journey driven by a talent for bringing people together, and focused on turning possibilities into realities.

Sarah’s early choices not only pointed towards her future career, but they quickly showed this was going to be an international undertaking: from space school in the UK and international space camp in the USA, to space university in Spain. “I vividly remember wanting to be an astronomer at age 14,” she says.

After completing an undergraduate degree in physics and a PhD in X-ray astronomy (the latter saw her develop instruments used on US satellites), Sarah’s research career took a detour. She landed a role briefing UK parliamentarians on science: it was interesting, but she missed being closer to the science, and was eventually drawn away from her science advisory role and back into research.

Here, her facilitation abilities quickly became clear. She took on a project management role for GridPP, the UK computing grid for particle physics that helped to discover the Higgs boson – the elementary particle at the centre of particle physics theory. “I was there at the celebrations for the turning on of CERN’s Large Hadron Collider, the instrument that made the discovery of the Higgs boson possible,” she says.

A move to Australia eventually saw her land with us at CSIRO, where Sarah now holds down not one but three (yes, three) roles.

The first is as the Deputy Director of CSIRO Astronomy and Space Science. “Our engineers and astronomers are some of the world’s best. They build and operate instruments that are world leading and that enable unique science,” she says.

Sarah says observatories from around the globe regularly approach us to help them build receivers for their radio telescopes. “We’ve built the Australian Square Kilometre Array Pathfinder, or ASKAP, which has specialised receivers that allow us to survey the sky quickly,” she says.

“We’ve also just made an instrument for the world’s largest single-dish radio telescope, FAST. It’s in southern China and is 500 metres across. We have a long history of being on the cutting edge of these types of technologies.”

Her second role, as our lead for the Square Kilometre Array, or SKA, also has a strong international flavour. She manages our involvement in the global, next-generation radio telescope project being built in Australia and Africa in collaboration with institutions from over 20 countries.

As Australia’s science representative on the SKA Convention’s negotiating team, Sarah has been on the inside of the project’s international discussions. “Everyone around the table had their own negotiating positions, but in the end we were all trying to achieve the same thing; it was extremely constructive,” she says of meetings in Rome to hammer out SKA’s international agreement.

Sarah’s third hat is as the head of our newly established Space Research Program. It’s a job that brings a number of additional responsibilities including for the new CSIRO Centre for Earth Observation, which manages Australia’s share of the NovaSAR satellite.

“Through the Space Research Program we now have the opportunity to apply CSIRO’s massive breadth of capabilities to space,” she says.

Sarah believes the space sector’s potential collaborations within our organisation are almost endless. “We could use the wisdom from CSIRO’s nutrition experts to figure out how to feed astronauts,” she says canvassing just one possibility.

Even mining and space could be compatible. “There is an abundance of resources in asteroids and other space objects: we could work on prospecting and extracting these. Of course CSIRO has expertise in mining, autonomous systems and robotics,” Sarah points out.

Taking on a part-time secondment for four months as Director of Strategy for the newly formed Australian Space Agency, Sarah will bring her understanding of the powerful mix of opportunities that are available to the nascent national agency.

In essence, what it all adds up to for this people-focused facilitator is a collaborative future.

“I sit on CSIRO’s Science Council, where people from all different disciplines are represented. It’s one of my favourite meetings, seeing the incredible cross section of CSIRO’s capabilities in the one room,” she says. “It’s forums like these that enable the ‘maybes’ of scientific challenges to become realities.”

Previous post:
Antarctica has lost 3 trillion tonnes of ice in 25 years. Time is running out for the frozen continent
Coming up next:
Under the hood of our biocontainment facility