People in the eastern states of Australia may see a magnificent view on the evening of Tuesday 15 April. If you gaze east around dusk you will witness the Moon in eclipse rising above the horizon.

A total lunar eclipse occurs due to the Sun, Earth and Moon lining up in a straight line. Whereas a normal full Moon is very bright  as the Moon rises on Tuesday evening it will already be eclipsed by the Earth. Due to refraction of sunlight through the Earth’s atmosphere  the Moon does not appear totally dark, instead it appears red or orange. Lunar eclipses are safe to view and you don’t need any filters or safety equipment. 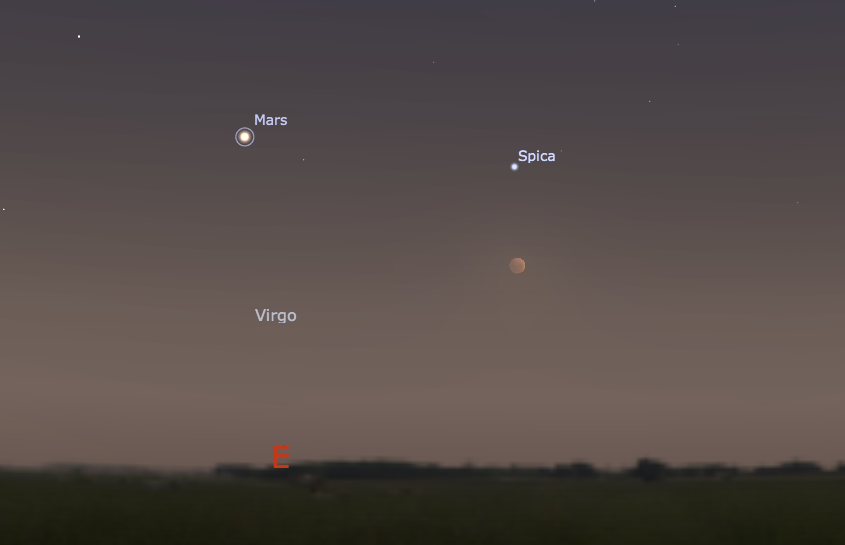 This screenshot from Stellarium shows the eclipsed Moon and Mars in the eastern sky near Sydney at 6pm, Tuesday 15 April 2014.

This screenshot from Stellarium shows the eclipsed Moon and Mars in the eastern sky near Sydney at about 6pm, Tuesday 15 April 2014.

The spectacle of a dark red Moon just above the horizon with a bright Mars nearby should be stunning and makes for some fantastic photographic opportunities. Free software such as Stellarium allows you to set your location and see what the event will look like ahead of time. This helps you plan a possible location to setup the horizon view for that memorable photo. There are also a range of apps for tablets and smartphones that can also aid your planning and viewing.

Sydney-siders will see the Moon rise at 5.28pm in total eclipse. The maximum eclipse is at 5.48pm with totality ending at 6.25pm. By 7.33pm the eclipse is over.

If you have clouds at your location or just want to watch the whole event online Astronomers Without Borders have arranged a live a webcast as part of Global Astronomy Month.

For more details about this and other eclipses in 2014 you can visit the NASA Eclipse site. As is common with lunar eclipses, two weeks before or after one we may see a solar eclipse. In this case we have a partial solar eclipse visible across much of Australia on the afternoon of 29 April. The Astronomical Society of Australia have a factsheet with details free for download.