Kagoshima, a city of 605,000 people on the southern part of the island of Kyushu sits opposite Sakurajima, one of the world’s most active volcanoes. This was our first destination for the 2014 PULSE@Parkes in Japan tour. Our hosts were Professor Handa and his students at Kagoshima University. On the trip from the airport to the city Sakuralima beclhed out a cloud of  volcanic ash rising high into the air – quite a welcome! This was soon matched by dinner, shabu-shabu in the local style with thinly sliced sliced pork instead of beef. Absolutely tasty! Over dinner we met with several of the students and Handa-san encouraged them to practise their English in conversations with us.

The 20m Iriki telescope, one of the four VERA dishes in Japan.

The 20m Iriki telescope, one of the four VERA dishes in Japan.

On Saturday we some of the students drove us out to the 20m VERA radio telescope at Iriki. This facility is one of four antennas scattered across Japan and operated by NAOJ for VLBI observations. On last year’s tour we spent a few days at another of the telescopes at Mizusawa in northern Honshu. The facility is in a lovely setting high up on a ridge, adjacent to the university’s farm with cows grazing and across the road from a golf course. Luckily the telescope was not in use for a short period so we were able to go up on the antenna and inside to view the radio receivers. Students at Kagoshima use the telescope to study masers in the galaxy.

On the hill behind the VERA antenna is a 1m infrared/optical telescope operated by the university, primarily for the study of Mira variable stars.

After our telescope tours it was back into Kagoshima for a lovely sushi lunch by the waterfront. Sakurajima had erupted again that morning and ash had fallen over the city, coating cars and signs in a thin black film. We then headed inland and south to the Chiran Peace Museum. The nearby airfield, the southernmost on Kyushu was the place from which 1,035 pilots took off on tokkō operations, better known outside Japan as kamikaze missions. The sombre, reflective displays seek to record the relics and materials associated with the pilots and “disseminate the message of peace and ensure the tragedy of war is never repeated again.”

Our final stop of the day saw us buried in hot black sands by the sea at a local spa. Quite an unusual experience but one extremely popular with people coming far and wide for it. Dinner back in Kagoshima was a delicious tonkotsu ramen. Sunday was the key day for out time in Kagoshima – the first of our PULSE@Parkes observing sessions. Twenty students from Kagoshima University, Kumamoto University, Tsurumaru High School and Kohan High School took part. An introductory talk about radio astronomy, Parkes and pulsars given by Rob Hollow and translated by Handa-san prepared the students to take control of the 64m Parkes radio telescope, the Dish. Dr Ryan Shannon then guided them through a two and a half hour observing run where each pair of students observed a few pulsars. They were then able to determine the distance to their pulsars using the online analysis module. After the successful session we celebrated with another dinner, this time local seafood. Discussions ranged from jobs in Astronomy, Australia and where in Japan each of the students was from. Two of the students will be visiting Australia next year to work with some of our astronomers so it provided a handy chance to discuss what they should do and see. The happy group at the end of a successful PULSE@Parkes observing session at Kagoshima University.

The happy group at the end of a successful PULSE@Parkes observing session at Kagoshima University.

On Monday Ryan gave a science talk on Cosmology with Pulsars for the undergraduate and post-graduate students at the university which generated a lot of questions. The Masters and PhD students are required to attend talks by visiting academics as part of their studies and it also extends their opportunity to listen to talks in English. 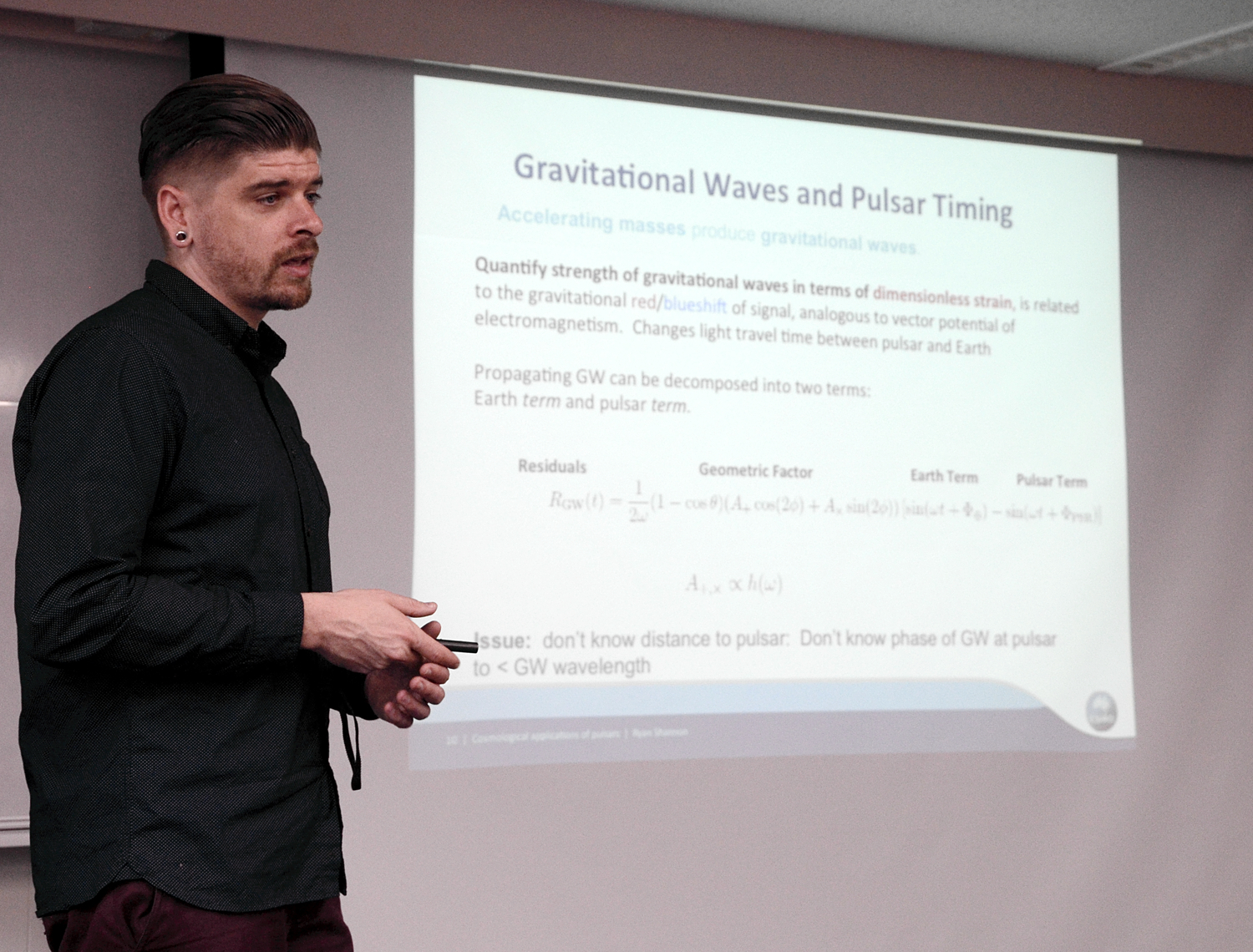 After a final farewell dinner, this time at a beef barbecue restaurant with another group of students we flew out the following day to Tokyo for more observing at NAOJ Mitaka on Wednesday. We loved out time in Kagoshima. Our hosts lavished us with hospitality and had a genuine enthusiasm for their region and astronomy. Hopefully we’ll be back soon!

PULSE@Parkes in Japan has been supported by the Australian Government through the Australia-Japan Foundation.