It is about 30,000 light years from Earth but it is moving at an estimated 9.6 million (yes, MILLION) kilometers an hour.

Researchers using three different telescopes – NASA’s Chandra X-ray Observatory and ESA’s XMM-Newton in space, and the Parkes radio telescope in Australia – may have found the fastest moving pulsar ever seen.

The evidence for the potentially record-breaking speed pulsar comes, in part, from the features highlighted in the composite image below. X-ray observations from Chandra (green) and XMM-Newton (purple) have been combined with infrared data from the 2MASS project and optical data from the Digitized Sky Survey (colored red, green and blue, but appearing in the image as white).

Pulsars are very cool -They are  highly magnetized, rotating neutron stars that emit a beam of electromagnetic radiation. This radiation can only be observed when the beam of emission is pointing towards the Earth, much the way a lighthouse beam does.

HEREare some audio of a pulsars. One of the audio files is from the pulsar PSR B1937+21. This is the second fastest known pulsar – spinning at about 642 times a second. The surface of the pulsar is moving at about 1/7 of the velocity of light and shows the enormous gravitational forces which stop the pulsar flying apart from centrifugal forces. The fastest-spinning pulsar is PSR J1748-2446ad, which clicks over at about 716 times a second. 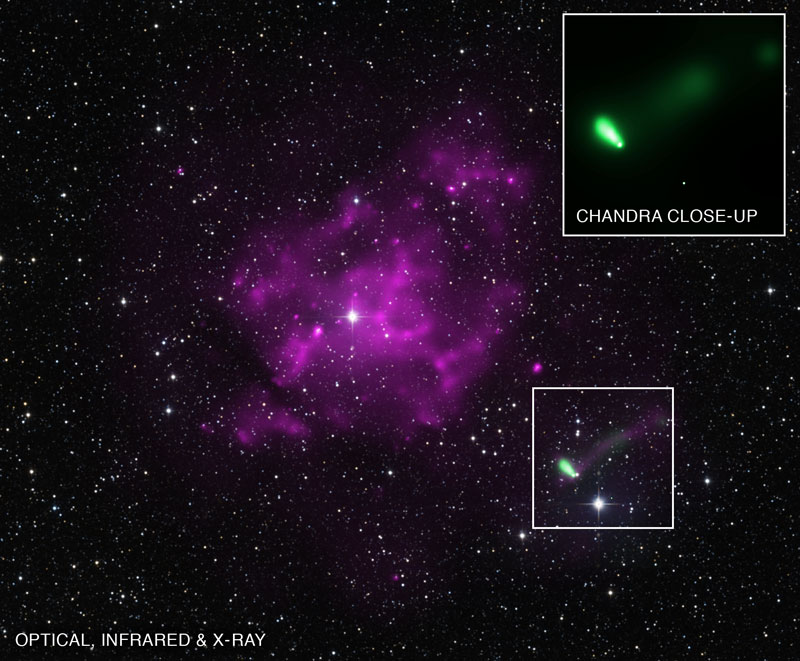