Plastic in the ocean kills more threatened albatrosses than we thought

Plastic in the ocean kills more threatened albatrosses than we thought

We examined the causes of death of 107 albatrosses and found ocean plastic is an underestimated threat. 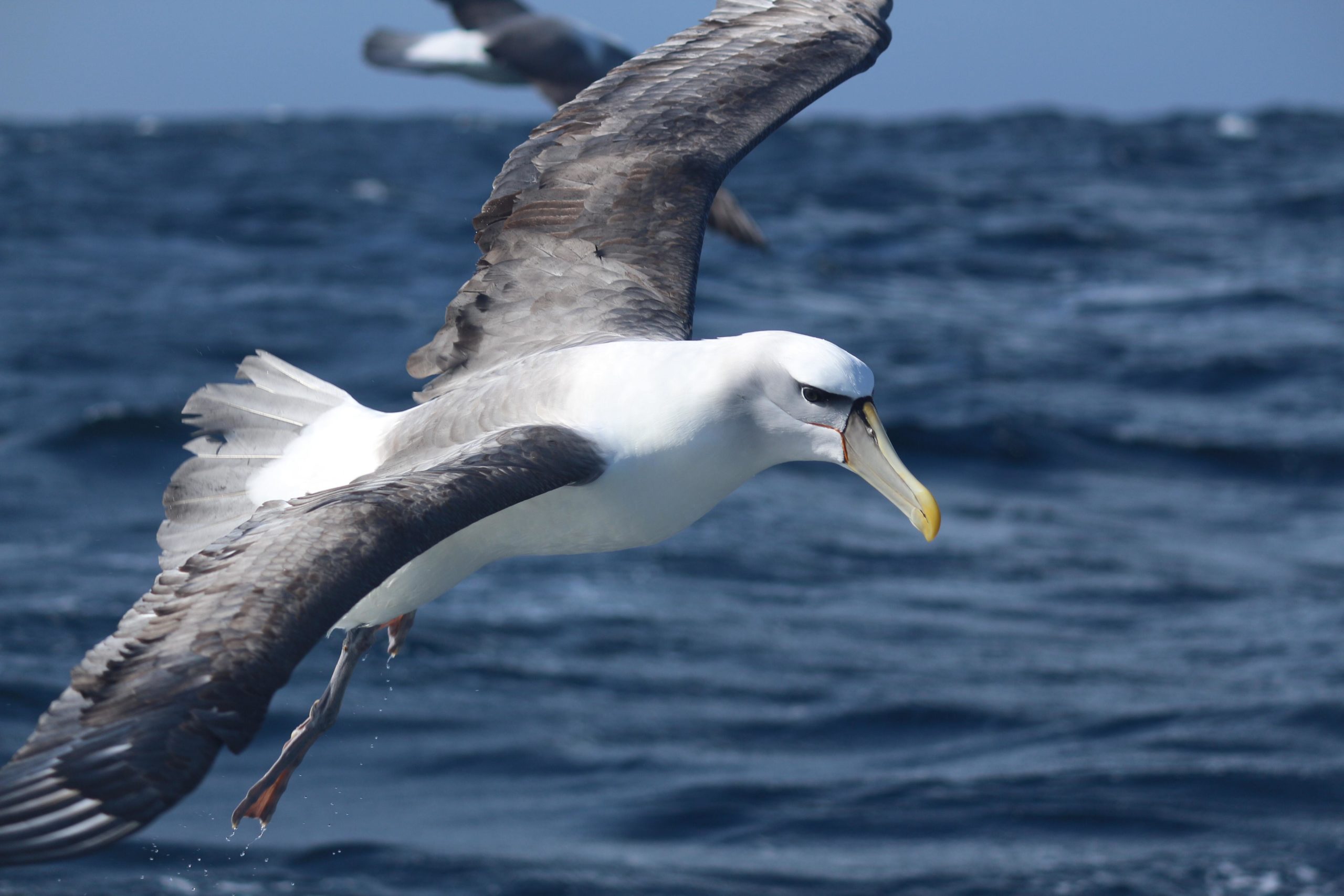 We examined the causes of death of 107 albatrosses and found ocean plastic is an underestimated threat. Image: Lauren Roman, Author provided

Plastic in the ocean can be deadly for marine wildlife and seabirds around the globe, but our latest study shows single-use plastics are a bigger threat to endangered albatrosses in the southern hemisphere than we previously thought.

You may have heard of the Great Pacific garbage patch in the northern Pacific, but plastic pollution in the southern hemisphere’s oceans has increased by orders of magnitude in recent years.

We examined the causes of death of 107 albatrosses received by wildlife hospitals and pathology services in Australia and New Zealand and found ocean plastic is an underestimated threat.

Plastic drink bottles, disposable utensils and balloons are among the most deadly items.

Albatrosses are some the world’s most imperiled seabirds, with 73% of species threatened with extinction. Most species live in the southern hemisphere.

We estimate plastic ingestion causes up to 17.5% of near-shore albatross deaths in the southern hemisphere and should be considered a substantial threat to albatross populations. 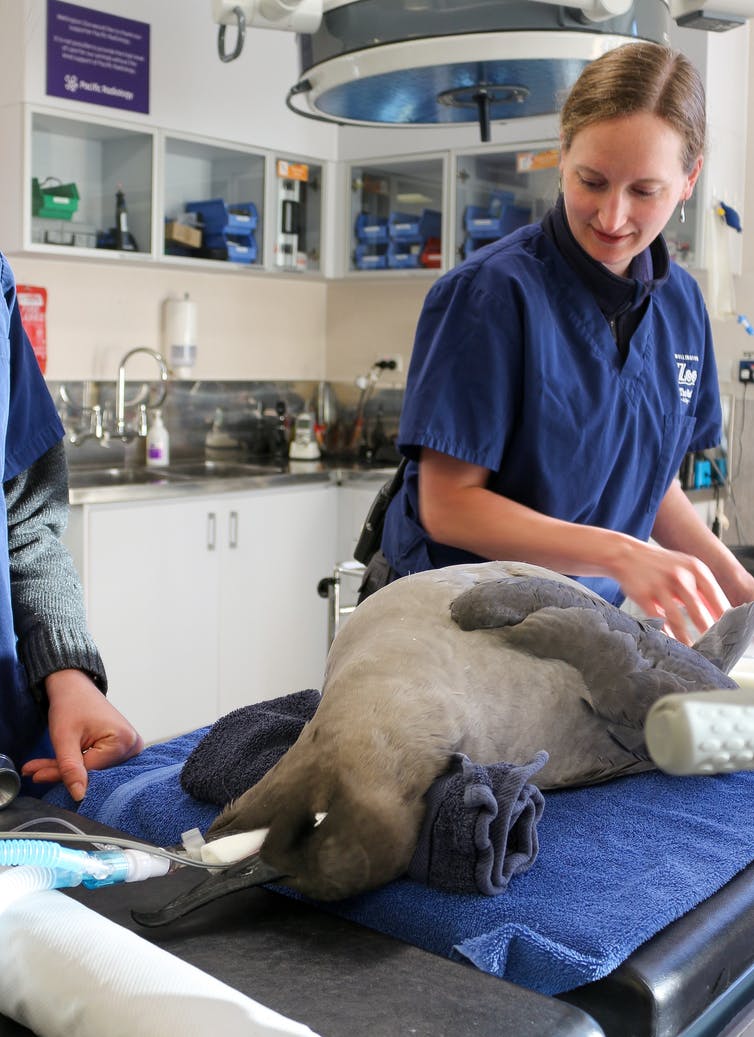 Albatrosses spend their entire lives at sea and can live for more than 70 years. They return to land only to reunite with their mate and raise a single chick during the warmer months.

Although the world’s largest flying birds are rarely seen from land, human activities are driving nearly three quarters of albatross species to extinction.

Each year, thousands of albatrosses are caught as unintended bycatch and killed by fishing boats. Introduced rats and mice eat their chicks alive on remote islands and the ocean where they spend their lives is becoming increasingly warmer and filled with plastic.

Young Laysan albatrosses with their bellies full of plastic are not just a tragic tale from the remote northern Pacific. Albatrosses are dying from plastic in the southern oceans, too.

When a Royal albatross recently died in care at Wildbase Hospital after eating a plastic bottle, it was not an isolated incident.

Single-use items make up most of the trash found on coastlines around the world. Seven of the ten most common items — drink bottles, food wrappers and grocery bags — are made of plastic.

Eighteen of the world’s 22 albatross species live in the southern hemisphere, where plastic is currently considered a lesser threat. But the amount of discarded plastic is increasing every year, mostly leaked from towns and cities and accumulating near the shore.

When albatrosses are found struggling near the shore in New Zealand, they are delivered to wildlife hospitals such as Wildbase Hospital and The Nest Te Kōhanga. A recent spate of plastic-linked deaths spurred us to dig a little deeper into the risk of plastic pollution to these magnificent ocean wanderers.

A thousand cuts: plastic and other threats

We compared these cases with data on plastic ingestion and fishery interaction rates from other studies. Based on our findings, we used statistical methods to estimate how many albatrosses were likely to eat plastic and might die from ingesting it, and how these figures compared to other major threats such as fisheries bycatch.

Because albatrosses are highly migratory, even those birds that live in less polluted areas are at risk as they wander the global ocean, travelling to polluted waters. Our results suggest the ingestion of plastic is at least of equivalent concern as long-line fishing in near-shore areas.

For threatened and declining albatross species, these rates of additional mortality are a serious concern and could result in further population losses. 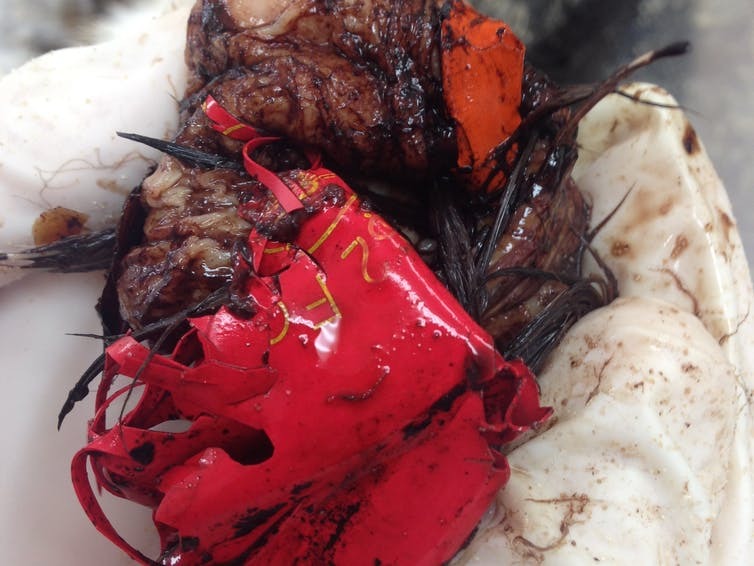 The remains of two balloons in the stomach of an endangered grey-headed albatross. Image: Lauren Roman, Author provided

The remains of two balloons in the stomach of an endangered grey-headed albatross. Image: Lauren Roman, Author provided

Not all types of plastic are equally deadly when eaten. Albatrosses can regurgitate many of the indigestible items they eat.

Soft plastic and rubber items (such as latex balloons), in particular, can be deadly for marine animals because they often become trapped in the gut and cause fatal blockages, leading to a long, slow death by starvation. Plastic is difficult to see with common scanning techniques, and gut blockages often remain undetected.

We recommend that wildlife hospitals, carers and biologists consider gastric obstruction when sick albatrosses are presented. Our publication includes a checklist to help in the detection of gastric blockages.

Global cooperation to reduce leakage of plastic items into the ocean — such as the Basel Convention and the recommendations by the High Level Panel for a Sustainable Ocean Economy — are first steps towards preventing unnecessary deaths of marine animals.

Stronger adherence to multilateral agreements, such as the Agreement on the Conservation of Albatrosses and Petrels which aims to reduce the impact of activities known to kill albatrosses, would help prevent the decline of breeding populations to unsustainably low levels.

If populations fall to critically endangered levels, intensive remediation including the expansion of chick and nest protection programmes, invasive species eradication and seabird translocations, may be required to prevent species extinction.

We would like to acknowledge our New Zealand and Australian colleagues who contributed to this research project. Veterinarians Baukje Lenting and Phil Kowalski care for injured seabirds and other wildlife at The Nest Te Kōhanga at Wellington Zoo. Veterinarian Megan Jolly cares for injured wildlife at Wildbase Hospital and vet pathologist Stuart Hunter provides a nationwide wildlife pathology service at Wildbase pathology at Massey University. David Stewart conducts threatened species research and monitoring at the Queensland state government’s Department of Environment and Science.