One Better than the Answer to Life, the Universe and Everything – DSS43 turns 43

One Better than the Answer to Life, the Universe and Everything – DSS43 turns 43

For a human, turning 43 might not be a big deal. But for an antenna that’s named Deep Space Station 43, well, turning the same age as your ‘designation’ is a little more special. 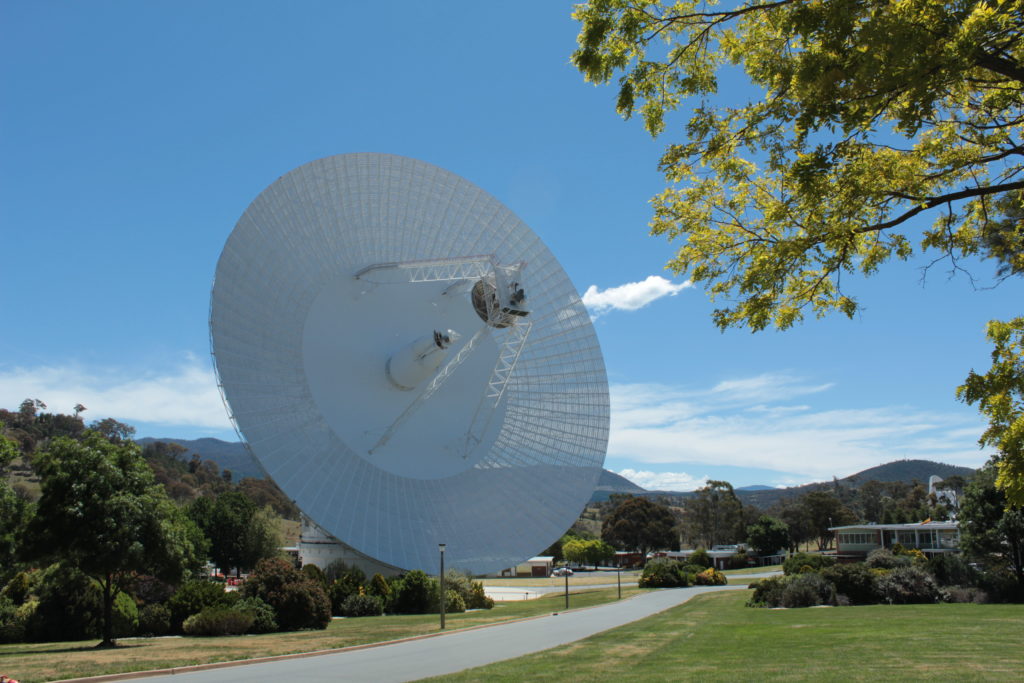 Deep Space Station 43 is the largest steerable antenna dish in the Southern Hemisphere.

For a human, turning 43 might not be a big deal. But for an antenna that’s named Deep Space Station 43, well, turning the same age as your ‘designation’ is a little more special.

Officially opened on 13 April 1973, Deep Space Station 43 (DSS43) is one of NASA’s giant radio antennas that are used to communicate with robotic spacecraft exploring the solar system and beyond. These antennas send out the commands telling spacecraft or rovers what we want them to do – take photos, do science, fire a thruster, or drive over to a rock – and receive back all the information that they collect for us.

Located at the CSIRO-managed Canberra Deep Space Communication Complex (CDSCC), at Tidbinbilla, it’s hard to recognise just how big DSS43 is if you’re not standing right next to it. It is 73.2 metres in height – the equivalent of a 22 storey building – and its dish is 70 metres wide – over 100 metres on the curvature (that’s big enough to fit a football field inside!). 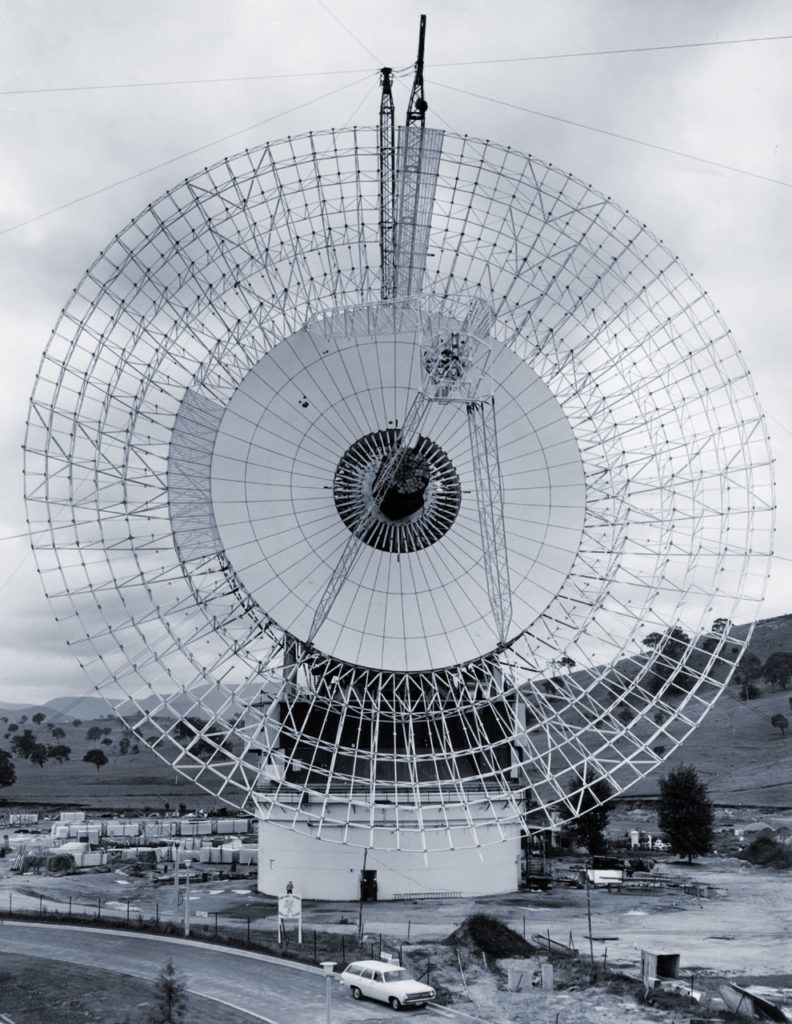 Black and white image showing the dish frame under construction.

DSS43 under construction at the Canberra Deep Space Communication Complex in 1971.

Originally constructed as a 64 metre dish, DSS43 was extended to a 70 metre wide dish in the late 1980s to accommodate ongoing communication for the Voyager missions. While a dish is a dish, the technology behind it has gone through many upgrades with improvements to transmitter and receiver systems. A major upgrade in 2011 replaced drive bearings and cabling, virtually making DSS43 like a brand new antenna. 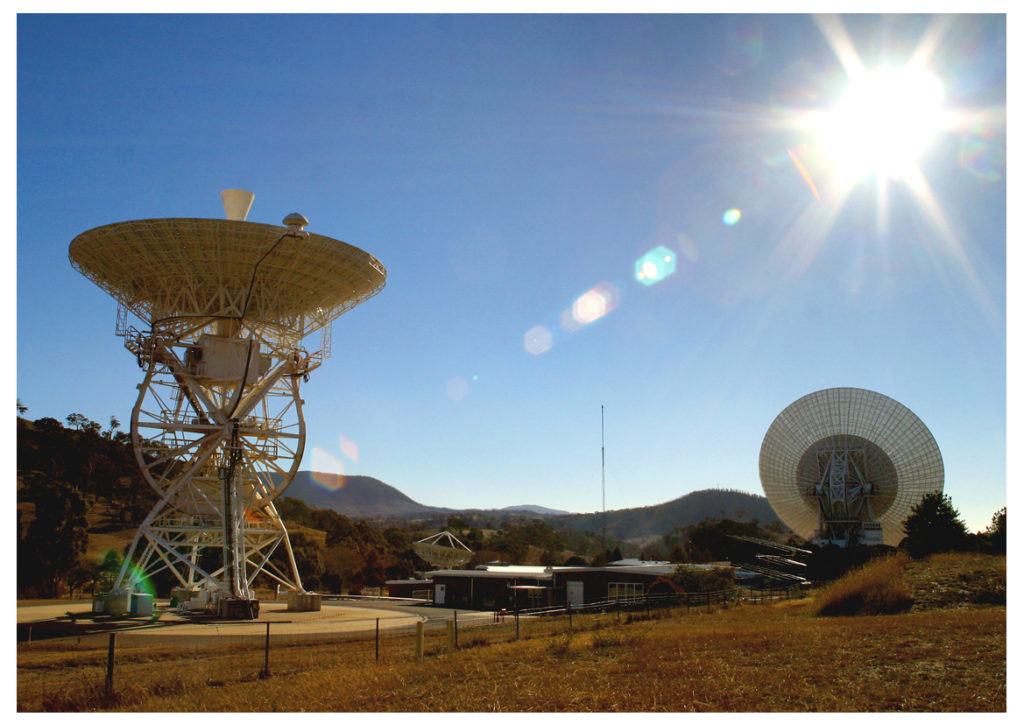 Apollo Antennas showing two dishes in close range of each other with the sun shinning down on them.

The Apollo Antennas – between them DSS46 and DSS43 tracked every human mission to the Moon between 1968 and 1972.

While the giant antenna was officially opened by then Prime Minister Gough Whitlam in 1973, it was actually operational a few months earlier and supported the Apollo 17 astronauts on the Moon. Not very far away is antenna DSS46, which received the first TV images from Apollo 11 and Neil Armstrong’s steps on the Moon. A great pair in human spaceflight history!

As part of the Deep Space Station 43’s 43rd anniversary, we released a video of what it’s like to climb DSS43 from ground level to the very top.

DSS43 has also supported hundreds of robotic missions exploring the Sun, planets, moons, comets, asteroids, dwarf planets and supporting deep space telescopes peering into the distant universe. Whether it was the landing of the Curiosity rover on the surface of Mars, the stunning images of Saturn from the Cassini spacecraft, or the first historic close up images of Pluto, DSS43 has been making history every day.

While Deep Space Station 43 is marking 43 years of service to NASA and other space agencies around the world, its most exciting work may be ahead with missions pushing further out into interstellar space. The future already holds planned missions returning humans to the vicinity of the Moon, near-Earth asteroids and eventually taking the first steps on the surface of Mars.

You can find out more information on the CDSCC here.

Previous post:
Opening up a new world of business: the Data61 Free Trade Agreement Portal
Coming up next:
Australia should take a stand against ‘killer robots’