The NSW Rural Fire Service is using new apps developed by CSIRO to conduct a critical assessment of the recent bushfires that devastated communities in the state, and to plan for future climate adaptation scenarios. 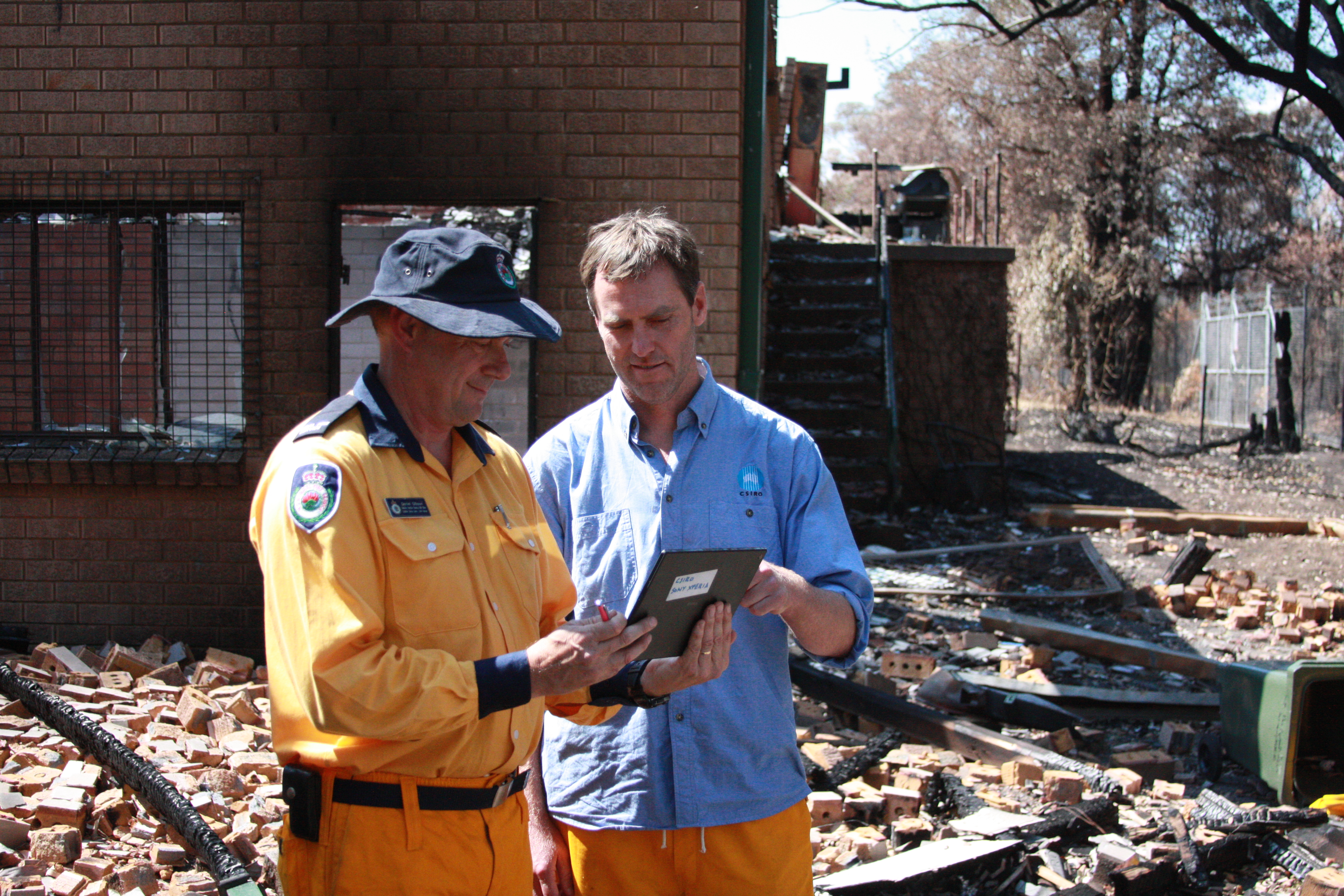 The NSW Rural Fire Service is using new android apps developed by the CSIRO to conduct a critical assessment of the recent bushfires that have devastated communities in the state, and plan for future climate adaptation scenarios. The two android tablet apps are being used for the first time in the Blue Mountains towns of Winmalee, Lithgow and Mount Victoria. The towns are among those severely affected by the recent bushfires.

Bushfires have long been a key part of Australia’s environment and are influenced by many factors – including warmer and drier conditions, extreme heat, strong winds and low humidity, housing design and materials, and fuel loads and management.

The new technology development is led by Justin Leonard, the research leader for bushfire urban design at the CSIRO’s Climate Adaptation Flagship.

The first app is called a rapid impact assessor, and enables the Rural Fire Service and CSIRO teams to enter a bushfire zone and quickly gauge the extent to which properties have been untouched, damaged or completely destroyed. The app works in real time, so multiple teams can use it simultaneously.

The second app is a house surveying tool. It captures the finer detail around a house, such as its design and the surrounding landscape. This includes polygons, polylines and point features. The information is loaded into a geodatabase and analysed for further research into fire management and prevention of house losses. 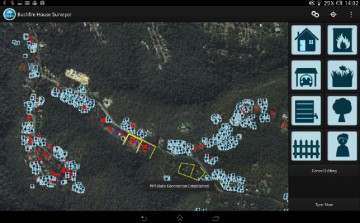 A screenshot of the Bushfire House Surveyor android app being used by the NSW RFS developed by Justin’s team in the CSIRO Climate Adaptation Flagship.

Mr Leonard says the app is also used to collect videos and photos to log the nature and impact of the loss.

“We collect most of our data by going in after a bushfire event and surveying the damage, and we relate that to laboratory experiments both small and large-scale to understand what’s really unravelling in the urban environment when a bushfire attacks,” he says.

The apps are a breakthrough in how bushfires are assessed. Mr Leonard says after the catastrophic Ash Wednesday bushfires 30 years ago, post-bushfire surveys were conducted using pen and paper, and film cameras.

“As computer technology and mobile apps and tablets came online, we instantly recognised that there was this opportunity to condense our survey methodology into a smart device,” he says.

The tablets contain all the data that has been collected in previous days, overlaid onto maps. The teams in the field can easily work out which areas have already been covered in real time, making the process more efficient.

“So people can avoid surveying the same house twice, even if they’re in close proximity to each other. They can even leapfrog down the street and just continually survey as a complete group,” he says.

Be bushfire ready this summer

Mr Leonard says CSIRO research is contributing to improved community education initiatives about how to behave in bushfires. This includes better protocols and thresholds for triggering evacuations and warnings, and a focus on improved building controls and planning policies.

He says Australians should plan ahead to improve their prospects in a bushfire this summer. A good start is to understand the severity potential of bushfires in their area, as well as their homes.

“Some of the things people can do to prepare for this summer is to look very carefully at the maintenance level of their house, look at all the detail about how much fuel has accumulated on and around their building and to really come to have a deeper understanding of what the unique vulnerabilities are for their house,” he says.

Sharing information to protect the community

The CSIRO and NSW Rural Fire Service have a long history of sharing information around the loss of houses in bushfires. This partnership has contributed to the reform of building and planning regulations in the state. Daniel Gibson, a community protection planner at the NSW Rural Fire Service, has been using the apps in Winmalee to conduct a comprehensive building impact analysis.

“The benefit of using the apps developed by the CSIRO is it allows us to do our jobs more efficiently. We can send the information that we record in real time back to the server, and so it reduces duplication,” he says.

“Working with the CSIRO helps us to analyse the impact of fires on communities and buildings and helps us to improve community safety in the future, particularly where people are living in bushfire-prone areas.”

While the app has been developed with the NSW Rural Fire Service, it is also being tested by other agencies as part of the state’s bushfire response. This creates the potential for a unified data collection process across multiple agencies, making the sharing of critical information easier.

Previous post:
The gym onboard RV Investigator!
Coming up next:
What’s bugging the Dish?