Jesse, Sophie, and Adrian talk about a newly discovered tyrannosaur skull that indicates sensitive lovers, Mars' lack of atmosphere, a handy new lab-on-a-glove, and they speak with Dr Steve Salisbury from the University of Queensland about his work on the 'Dinosaur Coast' in WA.

Before you listen to the episode, make sure to subscribe on iTunes and give us a rating —

Episode 5 of Interronauts is our d-d-d-inosaur special. We talk about the new tyrannosaur skull that reveals the terrible lizard’s sensitive side, and how Mars may have lost its atmosphere (spoiler: it was solar winds). On the CSIRO front, we talk about the new lab-on-a-glove, able to detect the deadly OP compounds on surfaces. And, being our dino special, we speak with Dr Steve Salisbury from the University of Queensland about the Dinosaur Coast, the thrilling multitude of prints and an imprint from the world’s largest foot. 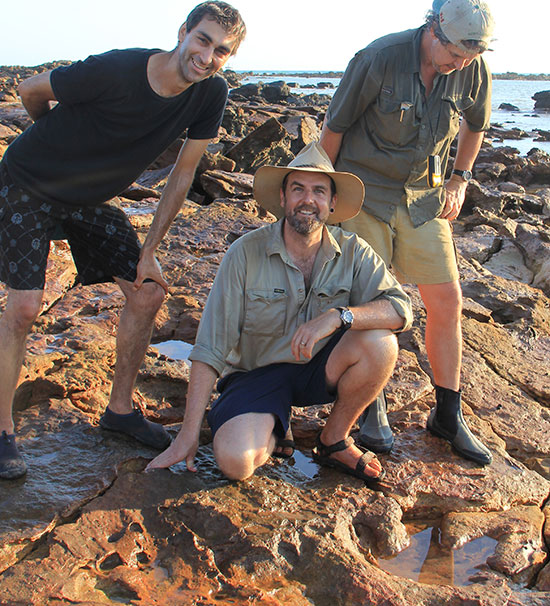 We spoke with Dr. Steve Salisbury from the University of Queensland who was part of a team studying the Dinosaur Coast, near Broome, Western Australia. The Dinosaur Coast is one of the most diverse dinosaur trackways in the world and is now home to the world’s largest footprint at 1.7 m. Here’s a great write up from the ABC, and here’s the research paper.

Here’s an extended edition of the interview:

“The ‘lab-on-a-glove’ was designed specifically with the defence and forensic industries in mind, providing reliable, real-time and on-site chemical screening for rapid response to terror threats. But this clever device might also be useful in the food security industry to screen for contaminated food at the farm gate,” from our blog. Learn more about the handy little thing here.

Previous post:
How we’re helping to cure what ails you
Coming up next:
Message in a niskin-bottle