Insect of the week – Cockroach

Insect of the week – Cockroach 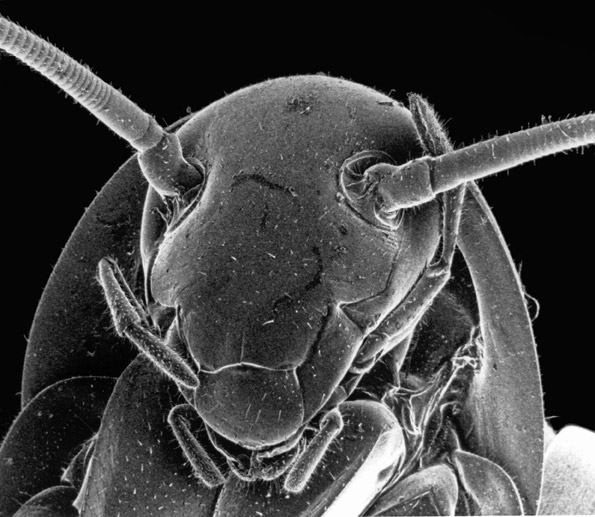 A face only a rugby league player could love.

We love to hate cockroaches. They scuttle across the floor when we turn the light on, and leave stains in kitchen cupboards. They seem to thrive in the foulest places.

But the few familiar kinds that disgust us only give a bad name to the numerous other blameless kinds of cockroaches – hundreds of native species in Australia alone – that go about their business unobtrusively, recycling all manner of organic material.

Like their introduced pest cousins, most native cockroaches are nocturnal; during the day they hide under leaf litter or bits of bark, or in burrows they make in rotten wood or in the soil.

On the left, a benign and wingless native bush cockroach (Polyzosteria limbata), a female carrying an egg case attached to her rear. On the right, an introduced pest cockroach (Periplaneta brunnea), with its overlapping wings covering the abdomen.

Would you like to keep a pet cockroach? Australia is home to the Giant Burrowing Cockroach (Macropanesthia rhinoceros), the world’s heaviest. These monsters, 80mm long and up to 35g in weight, rear their babies on dead gum leaves that they drag into metre-deep burrows in sandy soil in northern Queensland. They make good pets!