Hercules A Shows its Muscles

Hercules A Shows its Muscles

Some two billion light-years away, the yellowish elliptical galaxy in the centre of the image appears quite ordinary as seen by Hubble in visible wavelengths of light. The galaxy is roughly 1,000 times more massive than the Milky Way and harbors a 2.5-billion-solar-mass central black hole that is 1,000 times more massive than the black hole in the Milky Way. Emitting nearly a billion times more power in radio wavelengths than our Sun, the galaxy is one of the brightest extragalactic radio sources in the entire sky. 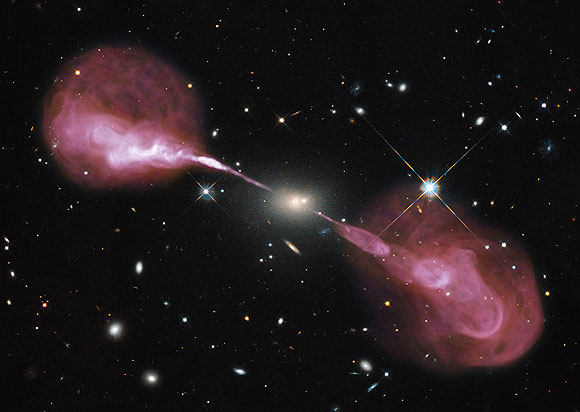 Previous post:
Jumping into The Helix!
Coming up next:
Voyager Crosses the Final Frontier