Spiders rank pretty low on most people’s ‘animals I’d like to work with’ scale. But this 'recovering arachnophobe' is putting her fears aside for science. 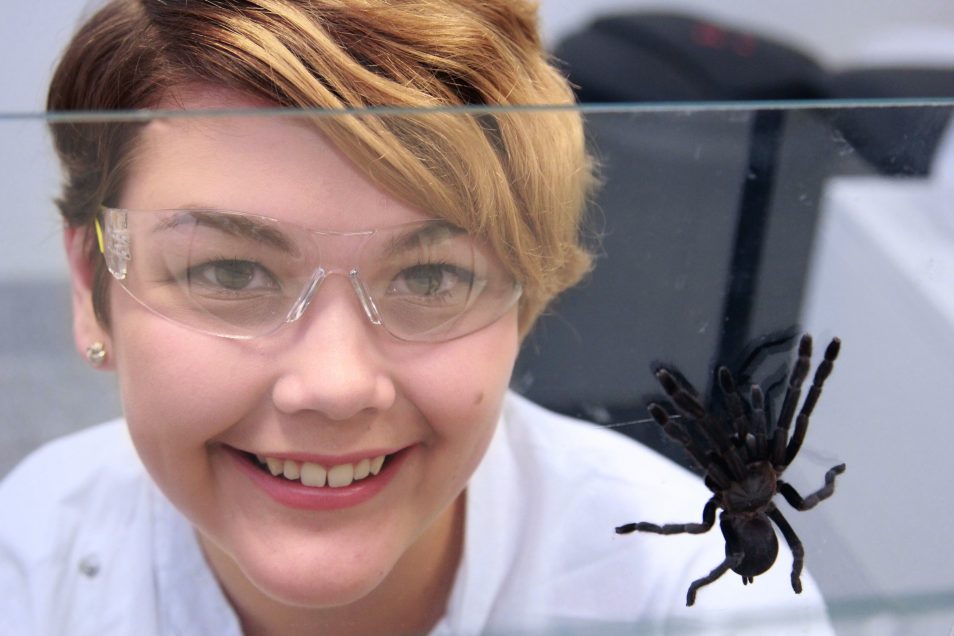 PhD candidate Samantha Nixon isn’t your average molecular biologist: she shares a lab with hundreds of spiders and spends a good portion of time sifting through sheep poo.

“My job’s not very glamorous,” she laughed. Thankfully, Samantha isn’t driven by glamour; she has more important things to think about. While sorting through poo, she’s busy collecting eggs from a parasite: the Barber’s Pole Worm (Haemonchus contortus). This blood-feeding gut worm is a really nasty piece of work.

“Spiders aren’t the real creepy crawlies, parasites are. Heavy infections of the Barber’s Pole Worm can drain the sheep of as much as 10 per cent of their blood volume per day. They don’t have enough energy to grow or produce wool and, as you’d expect, they get really sick,” Samantha explained.

Unfortunately, the Barber’s Pole Worm is widely drug-resistant, making it hard to treat. That’s where the hundreds of spiders in Samantha’s lab come onto the scene.

Spiders are the experts

There are many animals that use venom for hunting or defence. Jellyfish, snakes, even our beloved platypus have venomous spurs (well, the males do). Venom is a wonder of evolution: it’s fast acting, potent, and most importantly, very selective. It’s an amazingly diverse cocktail of molecules that have lots of exciting properties. But why spiders? Surely they rank pretty low on most people’s ‘animals I’d like to work with’ scale.

“Over thousands of years, spiders have evolved to produce venom that is extremely effective for killing insects. Of all the venomous creatures we could work with – spiders are most likely to have the molecular answers we’re looking for,” Samantha explained.

Ok, so it makes perfect sense, but does that mean Samantha likes working with them?

“I call myself a ‘recovering arachnophobe.’ Challenging myself to face my fear of spiders was one of the reasons I went into this research. I still prefer a spider in a cage than on my hand, but as I’ve learnt more about them, my fear has turned into respect. I see they’re much more afraid of us then we’re afraid of them. And I know there are more than 45,000 species of spider on the planet, but less than 0.5 per cent are dangerous to humans.”

That last fact is yet another reason spider venom is an especially good candidate for drug research: unlike snakes, spider venoms have not evolved to target large mammals, like us, so their venoms are generally less dangerous to us. However, we can’t just inject spider venom directly into people. Firstly, there’s simply not enough spider venom to go around, and secondly, the venom will still pack a painful punch! So Samantha is working to isolate the venom into different molecules and find the perfect compound to treat diseases. This isn’t just a theory by the way – spider venom has been turned into lots of incredibly useful medicine and is used to treat chronic pain, epilepsy and even reduce the harmful effects of a stroke. 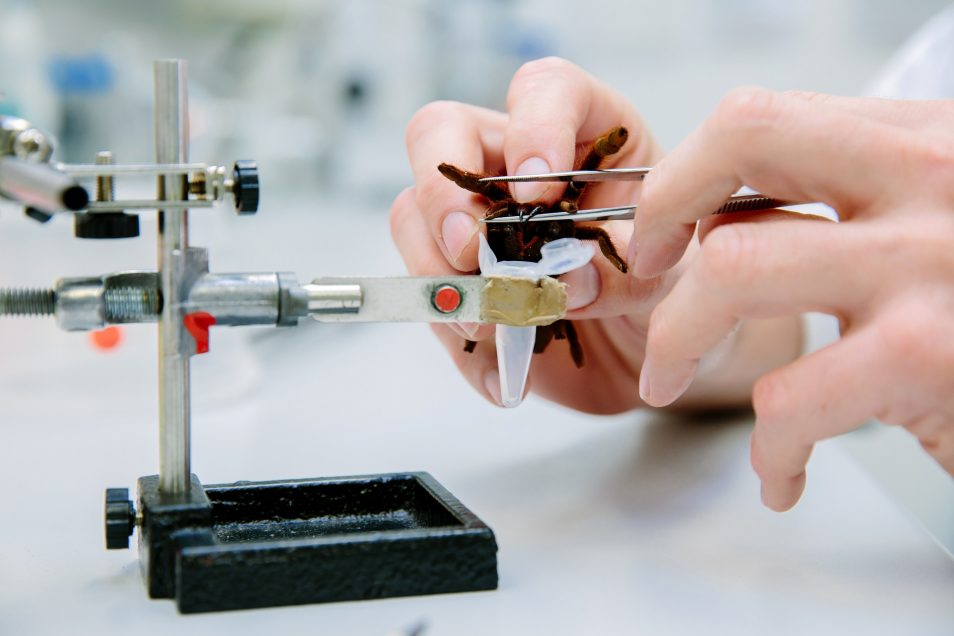 Milking a tarantula is as tricky as it sounds. Credit: IMB Communications

You probably wouldn’t guess it, but many spiders are actually reluctant to bite as a defence (another reason to stop being so scared of them).

“Using the venom is kind of the last resort, it takes a lot of time and energy to make so they don’t want to waste it. Before they bite they’ll run through other defence mechanisms; like trying to run away, rearing up to show off their fangs and pretending to strike. It’s surprisingly difficult to get them to deploy venom.”

But from even a small sample of venom, Samantha has a lot of work to do.

“A spider can have around 100 unique peptides in their venom. So given the number of species of spiders in the world, there are easily over 10 million unique peptides to investigate.”

While Samantha’s focussing mostly on finding a venom to stop the Barber’s Pole Worm, it’s not her only goal.

“We hope that finding venoms against the Barber’s Pole Worm will work against other parasites of cats, dogs, cattle and even people. I’m also collaborating with scientists around the world to find venom that we can turn into a drug to combat other parasites including malaria (caused by Plasmodium parasites) which, despite being the best known and best funded of the parasitic diseases, still killed over 400,000 people in 2016.”

One day, it’s quite possible Samantha will make a discovery that can save hundreds of thousands of lives. Suddenly, sifting through a bit of manure and hanging with spiders all day doesn’t seem so bad.

You can! Join her at Pint of Science.

Previous post:
Coviu spin out puts remote medical access in good health
Coming up next:
It will take decades, but the Murray Darling Basin Plan is delivering environmental improvements