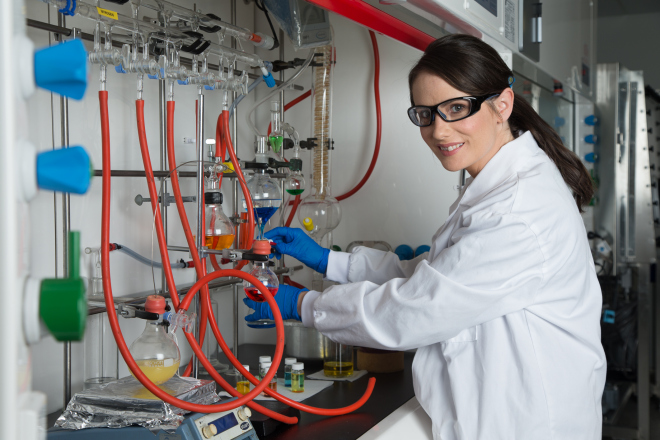 Cara Dohery at work in the lab. Image courtesy of L’Oreal Australia

Cara is presented with her L’Oreal Women in Science Award

The UN estimates that 780 million people worldwide have no clean water, and that number goes up if you include those who have been affected by natural disasters like floods, earthquakes and tsunamis.

Cara Doherty, who has just won L’Oreal’s 2014 Women in Science Award, is working to change that. Using crystals. A very strange kind of crystal, full of nothingness. And to make it stranger, she uses antimatter –positrons – and synchrotron light to measure the crystals and their properties. Then she uses her own patented technique to form them into useful shapes.

These crystals are what’s called metal organic frameworks (MOFs for short). They’re a kind of molecular level sponge that, like a Tardis, is bigger on the inside. Much bigger. They’re massively absorbent, which is the key to their potential.

Technologies based on MOFs have the potential to revolutionise batteries and medical sensors (Cara won a Tall Poppy Award in 2013 for her earlier work on biosensors). They could help clean up carbon emissions. They could also create a smart water filter that could be used to give many millions of people access to safe, clean water.

That’s what Cara will be using the funding from her L’Oreal Fellowship to investigate. She wants to develop the 3D structures such a filter would need.