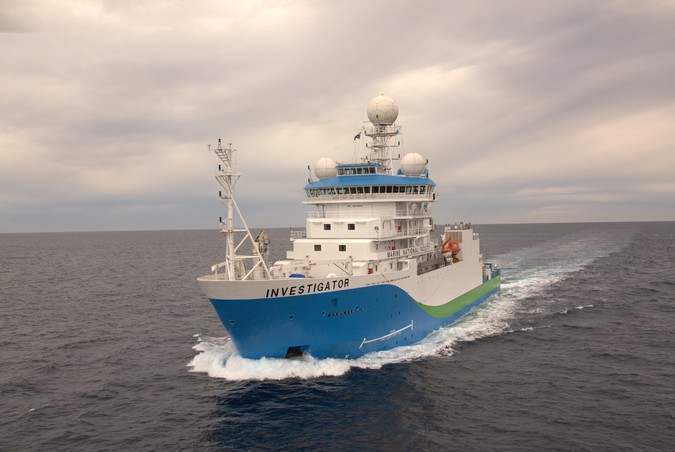 Meeting #75: 3-4 September 2014 It has been a busy period for the Marine National Facility with the arrival of Investigator in Hobart on 9 September 2014, our new state‑of‑the‑art research vessel. This step change in Australian marine and atmospheric research capability will provide exciting new opportunities to our research community and act as a catalyst for international collaboration. I would like to take this opportunity to thank and congratulate the Future Research Vessel Project, led by Toni Moate, for their work over the past 5 years in overseeing the construction and delivery of the vessel. I would also like to thank Dr Dave Williams for attending the first day of the Steering Committee meeting. Dave was recently appointed as the Executive Director of the newly created CSIRO National Facilities and Collections which is now home to the MNF in CSIRO, and Dave’s attendance provided important insights into the new CSIRO structure and future opportunities associated with the operation of the MNF. We look forward to working with Dave as the future unfolds. Investigator progress Now that Investigator has arrived in Hobart the MNF will commence a period of scientific equipment installation followed by a series of sea trials over a 6 month period. These trials will provide the first opportunity to test the full range of scientific equipment on the vessel and develop safe work procedures, including sea trials in the Southern Ocean. Following sea trials the MNF can commence scientific voyages to further test the vessel in its warranty year. Schedules With the delayed arrival of Investigator impacting forward voyage schedules and the associated backlog of voyage applications, it has been decided not to call for applications for sea time for 2016-17. Rather, Steering Committee has approved a three year voyage schedule for 2014-15, 2015-16 and 2016-17 which has been developed from the applications backlog. The MNF will now implement this schedule commencing with notification of successful applicants in the coming weeks, after possible schedule adjustments have been considered. The next call for primary applications is therefore planned to be made in July 2015 for the 2017-18 scheduling year. In light of the above, Steering Committee has decided to call for Supplementary applications for both 2015‑16 and 2016-17 schedules simultaneously. This call will be made in the coming months and will offer the marine community additional opportunities on Investigator. Once again, I would like to take this opportunity to thank the marine community for their patience, support and flexibility throughout this transition period.  National Marine Science Committee (NMSC) In March 2013 the national Oceans Policy Science Advisory Group (now called the National Marine Science Committee) launched the Marine Nation 2025: Marine Science to Support Australia’s Blue Economy. This paper provides a framework for national discussion around the grand challenges facing Australia in relation to our ocean estate, and how marine science can provide solutions that contribute to Australia’s future environmental, social, cultural and economic well being. In response to the recommendations of this report, a formal NMSC has been established to oversee the development and implementation of a 10-year national marine science plan through a White Paper process. Steering Committee welcomes and supports the development of this plan which will help guide the prioritisation of nation benefit in the assessment of MNF research applications into the future. Furthermore the Steering Committee decided to include a new “Path to Impact” section in the MNF application form. As such, Steering Committee has sought opportunity to engage directly in the White Paper process through formal representation within the Infrastructure theme working group. Steering Committee also looks forward to participating in the National Marine Science symposium in Canberra and the subsequent development of the Plan as part of this process. In conclusion With excitement high around the arrival of Investigator, Steering Committee looks forward to working collaboratively with the Australian marine research community to optimise the use of our amazing new vessel. Dr Ian Poiner, Chair

Previous post:
#winner #RVInvestigator #shipselfie!
Coming up next:
Less is more with the Water Use Efficiency Initiative